Back when the Bollywood Fugly blog was more active, those of us who contributed to it often got accused of being mean-spririted, watching films just to laugh at their foibles or indulging too often in "so bad it's good." I think those of you reading this know me well enough to understand that was never a deliberate intention, but I can't deny that I sometimes take great pleasure in the, er, inventions of wardrobe departments across the subcontinent. I don't go looking for horrible costumes, but if they have made their way into a released film and I stumble across them, and they in some way delight or amuse or amaze me, then by Helen I am going to enjoy them. They are (or should be) as much a part of the context of what's happening in a film as set design, props, and blocking of the extras.

They have visual impact. They testify to great creativity. They demonstrate the ability of professionals to take an idea, often formed from or in conjunction with other elements of the film like lyrics, set, choreography, or plot, and running with it to glorious distances. At other times, they warn of the dangers of letting the lunatics run the asylum. But no matter what, the costumes that catch my eye are evidence of earnest attempts to hold up one of filmidom's cardinal rules: NEVER BE BORING!!!!! I admire and respect that, I really do.
ANYWAY. Costumes. Terrific or terrifying, bring 'em on.
I saw this one from Cocktail just today.

One of the pleasures of costuming is that it doesn't have to be complicated. A linen blazer and fuchsia and gold fringed scarf and voilà, the hero is suave, tinged with both traditional and western touches, and he is still prominent against that beautifully crazy and evocative background.

The first horrendous costumes I remember are from that perennially easy target, Disco Dancer. 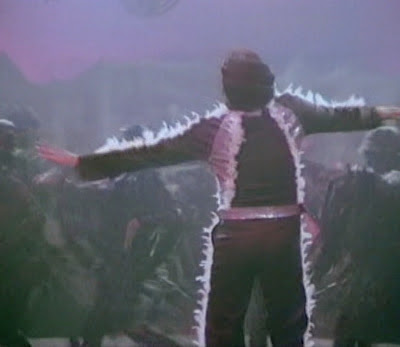 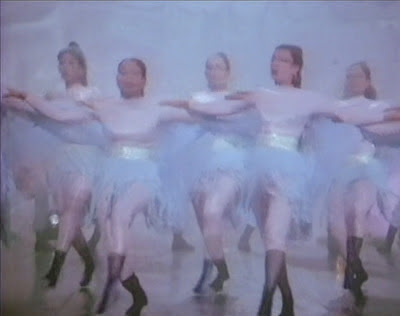 Yet not only do I remember them, every time I think of them I smile with a happy glow of "Ohhh yeah, remember how amazed you were the first time you saw these? That was fantastic."

This must be on purpose. It must be about something, reflect something, tell us something? But what? It is a great mystery that I take no end of pleasure in mulling over. (And yes, I also assume it's probably product placement, but if so why so many of the same damn shirt? Why not also a hoodie here and there? A watch? A t-shirt, even?) 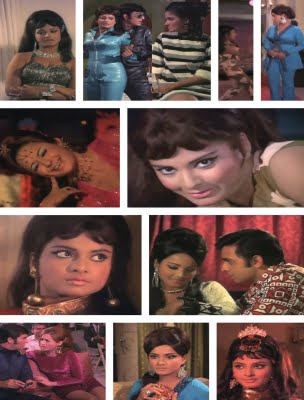 These cleanse my palate because anything getting me down is replaced with sheer envy and a soupçon of lust and "Why am I not as fabulous as vintage Rekha? Why? WHYYYYY?" And then I get over that unanswerable mystery and just revel in how nice it is that these ever existed and were captured on film for the delight of all. Thank you, movies. Thank you!

Banno said…
I'd like to be as fabulous as vintage Rekha too. Not the boring Rekha she now is.

Anonymous said…
What makes me happy are those 60s salwars and saris...which are, given the circular nature of fashion, back in fashion now :) Not so happy about vintage hairstyles :|

Yaadein...the biggest single collection of hilariously inept costuming in one number that I've ever seen...(I still haven't seen Disco Dancer). How many rips, zippers, studs and fringed bits can one outfit have, Hrithik?
June 28, 2012 9:16 AM

Beth Loves Bollywood said…
Banno - Next time I am in India, let us enact a rigorous Vintage Rekha plan!

M - Those are pretty fabulous, I agree!

Jenny - Oh yes, that one is a treasure. TREASURE. I haven't seen this film but I think it was discussed thoroughly on Bollywood Fugly by others. And Kareena's prom dress is so...wow.

Hrithik's shirt is like a mask for his pecs.

You must have some top favorite films for costume purposes too! Hope you'll blog about htat 9if you haven't already)!
June 28, 2012 5:49 PM

Katrin said…
Dharam-Veer definitely wins in the What?Why?How? category. Dharmendra's skirts, the ruffles (http://www.missionbas.de/Sabberfilme/dharveer/dvruesche.jpg) ... There are few costumes that make me squee quite so much.

I'm also still madly in love with Rani's clothes in Bunty aur Babli (well, apart from the hideousness that is Nach Baliye). The perfect antidote after I've had to look at something hideous ...

Aparna said…
While talking about Siddharth sporting only polo shirts, I remembered Imran Khan sporting nothing else but full sleeved checked shirts in 'Mere Brother ki Dulhan'...almost in every scene, except maybe in the quintessential engagement or marriage scene.
June 29, 2012 5:49 PM