- December 10, 2013
We in the fillum-watching world need a word for this intricately balanced but continually reconfigured sense of finding movies formulaic and/or predictable in some aspects yet wildly unexpected in others. Whatever it's called, Aditya 369 (which I watched in its Hindi dub, Mission 369, since no versions on youtube have subtitles) falls right into this phenomenon for me: somehow I had never heard of this 1991 Telugu sci-fi film about time travel with an Einstein-haired Tinnu Anand and a Georgian-outfitted Amrish Puri

despite regularly reading the "top ten Indian SFF films" lists whenever I encounter one at the release of a film styled as such, and in fact only learned of it in Mihir Fadnavis's piece on Krrish 3 for Firstpost, yet I am not at all surprised it exists.

I am not a reliable source for details of the story of Aditya 369, but I do know that an impish child gets himself locked in a museum (A MUSEUM!!!! I would love the movie just for being the museum-iest Indian film I've seen yet, and it is evocative of my professional experience in the US and of my observations of museums in India) overnight after a school trip and witnesses the theft of a diamond, which is for some reason important to Amrish Puri. The boy is saved by our hero, and our hero's girlfriend's father is a scientist with a time machine out back, and girlfriend just happens to be boy's cousin (or similar), and then people go in the time machine, and it accidentally goes off, and they go to Ye Olde Times (1526) and find out stuff about the diamond after our otherwise pointless heroine has an angry danceoff* with princess Silk Smitha, and then whooooooa! 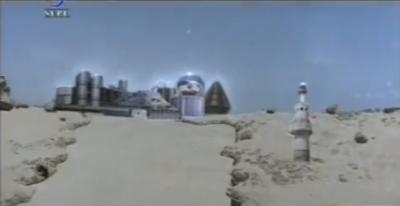 they whoosh forward to the distant future and things are a little post-apocalyptic—perhaps literally, but I couldn't swear by any dialogues of nuclear holocaust—and then finally home again to battle Amrish Puri.

This might be the kind of movie I'd enjoy less if actual understanding forced me to try to reconcile its probably loony plot, but ignorance is bliss. The hero is of that wave that to me reads as blancmange sweater uncle with no appeal whatsoever, but the internet informs me that this spawn of N. T. Rama Rao was indeed the shizz at the time this film was made. * shrug * The heroine is similarly bland and has much less to do, and she cannot even muster up enough oomph to win that danceoff, which frankly is kind of embarrassing. The kid is slightly obnoxious—he'd get thrown out of my museum for such behavior—but not whiny or cutesy. Large swathes of Love Story 2050 and Action Replayyyyyy have fled my memory, but there are particular elements of Aditya 369 that feel familiar, like the look and general demeanor of the avuncular scientist and the shape of the time machine. The only real flaw I can find is that there is far too little of Amrish Puri cackling and stomping around in knee breeches and thus no real sense of what menace he poses. It's all very good-natured, if perhaps not particularly exciting. To demand more of a film than giant gold thrones, plastic gems, time travel, and theft of cultural heritage seems like hubris.

Truly, you must see for yourself in this annotated slide show.

* I beg you to click here if you have not seen the Saturday Night Live skit of Matt Damon re-enacting the Justin Timberlake/Britney Spears angry danceoff of 2002.

Unknown said…
Never heard of a hindi movie named, Aditya 369. Anyway thank you for writing and sharing this post, which helped us to know about such a movie. Keep sharing more movie reviews and information.
Movie reviews
December 20, 2013 12:33 AM

Twilight Musings said…
LoL. I remember watching this movie as a kid. The heroine didn't last long in Tollywood. It is one of Balakrishna (NBK)'s reply in "fantasy" for chiranjeevi-Sridevi super hit "fantasy" Jagadeka veerudu athiloka sundari (1990). NBK sort of fancies himself to be a direct competitor for Chiranjeevi.

I guess N.T.Rama Rao's descendants are always on the look out for "historical" roles so that they could dress up in old-fashioned clothes and spout long dialogues in old Telugu, and remind audience their pedigree. (Tarak is not half-bad at this stuff though).
December 25, 2013 7:00 PM

This was an early 90s movie and the heroine was basically cast because we Indians have a strange obsession for fair skin(SOME Indians). Also, back then We indians were aspiring for West and greatness too. So this movie reminded us about our past glory(they go back in time to Vijaynagara Empire with capital Hampi: Still the World's greatest ruins. You can google.) as well as remind us of futility of World War III(hypothetically EAST vs WEST) which leads to the apocalyptic future.
The movie director is pre-empting any Indian desire to give the West a taste of their own medicine because the British took away diamonds including Kohinoor (on the Queen Elizabeth's crown ) from India. In my opinion time machine is a cinematic device the director uses to say What if? You can take my word, because the director, Singeetam Srinivasa Rao, is a very intelligent man. He also made the silent movie Pushpak.

This was an early 90s movie and the heroine was basically cast because we Indians have a strange obsession for fair skin(SOME Indians). Also, back then We indians were aspiring for West and greatness too. So this movie reminded us about our past glory(they go back in time to Vijaynagara Empire with capital Hampi: Still the World's greatest ruins. You can google.) as well as remind us of futility of World War III(hypothetically EAST vs WEST) which leads to the apocalyptic future.
The movie director is pre-empting any Indian desire to give the West a taste of their own medicine because the British took away diamonds including Kohinoor (on the Queen Elizabeth's crown ) from India. In my opinion time machine is a cinematic device the director uses to say What if? You can take my word, because the director, Singeetam Srinivasa Rao, is rated very highly down south in India. He also made the silent movie Pushpak.