- June 01, 2011
For all your Kapoor Khazana reference needs (and beyond), here is a Kapoor family tree. This image is courtesy of Madhu Jain's book The Kapoors: The First Family of Indian Cinema (Penguin Books India, 2005). Click the picture to enlarge to legible size. 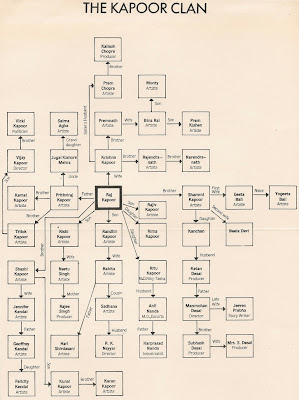 * I don't know about you, but this is where my brain gave out. Raj Kapoor is related to Mithun Chakraborty! Talk about masala!
Bollywood resources (books articles websites etc) Kapoor Khazana