For a week now, I've been trying to come up with a way to link all three of the short films in Satyajit Ray's Teen Kanya (all adapted from short stories by Tagore). The thread I keep coming back to is "heaven help you if you're female: variations on a theme." I'm not going to propose that that sad idea is what either Tagore or Ray intended to be the feeling of their work, but I could not escape it. These are the kinds of films that are difficult to watch but impossible not to respect and admire.

The Postmaster
This is a tiny little story a man from the city (Anil Chatterjee) who comes to a village to be the postmaster, and he is befriended by an orphan girl, Ratan, who is his maid and cook and eventually nurse and pupil. The contrasts within Ratan—her slight physicality that had done so much hard work already in her young life, her shocking pragmatism that does not muffle her quiet vulnerability, her adult lifestyle with her childlike heart—make her one of the most compelling child characters in Indian cinema. The young actress, Chandana Banerjee, is equally amazing, and I wonder why she only did two more films after this. Her performance here is another example of Ray being able to elicit phenomenal work from debut actors (for example, Sharmila Tagore and Soumitra Chatterjee in Apur Sansar and Aparna Sen in the third segment of this film). 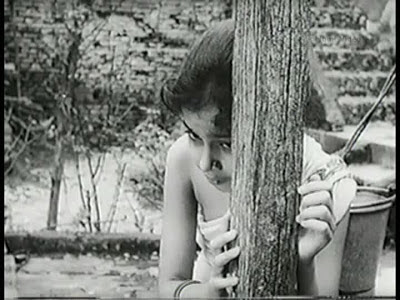 To me, it is the teacher-student aspects of the postmaster and Ratan's relationship that are the most significant (and thus the most moving). This is clearly the first time anyone has encouraged Ratan to develop skills that can help her move beyond her current situation in life. I wonder if this is supposed to be read as the reciprocation of her having nursed him through malaria: she supported (or perhaps even saved) his life and he is providing something very significant to hers, even if to him teaching someone to read and write is no big deal and even if she never gets a chance to make use of what he taught her.

If you are unmoved by this, you are a robot, and I might even have to apply that label to the title character. He breaks her heart when he fails to understand what their relationship means to her, and I wanted to shake him: "Hasn't this child already had to learn enough about the bleak world of adulthood? Why are you adding casually-delivered devastation to her lot?"

Monihara
Though it is weird and scary in interesting ways, starting with the narrator who frames the story (Gobinda Chakravarti, who appears almost skeletal), I was frustrated enough with my failure to understand why the characters behave as they do that I never fully surrendered to the plot or the actors. This could very well be a problem of insufficient subtitles, but it could also just be me and occasional  inability to just let go and commit to the ride as I encounter it.

It reminds me of Charulata gone horribly wrong, with a wife (Manimalika/Kanika Majumdar) who is desperately lonely and a husband (Phanibhushan/Kali Banerjee) who seems to have little time for and understanding of her. Here, instead of reaching for an empathetic and stirring young man, the wife obsesses over jewels, but I have no idea what they actually represent to her: wealth, power, freedom,  love, children she can't have?

Maybe that uncertainty is deliberately cultivated and is supposed to add to the overall uneasiness in the story, especially when augmented by the arrival of someone from her past whose ability to threaten her is never explained. Kanika Majumdar's performance is wonderfully strange, her eyes wide and darting around, giving her character an unpredictability and off-kilterness that add to the sense that something nasty is brewing. 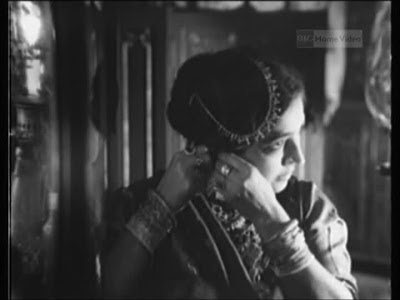 The set designer for this segment deserves special praise. Manimalika and Phanibhushan's mansion is very eerie: windows that hold only a vast and unspecified view, dark wood furniture that seems like a forest in winter, ominous taxidermied birds, and clouds of dust. In other words, it's dead, and it's impossible to hold out hope for those who find themselves inside.

Shudder. What a weird little film.

Samapti
Before I go anywhere else with this, I want to state for the record that I find this film very funny. Humor seems to be a trait that Ray does not to get enough credit for outside of the first Goopy and Mahapurush, but I've found myself laughing in most of his films I've seen so far. This one might be the funniest, with mischievous, face-pulling Aparna Sen 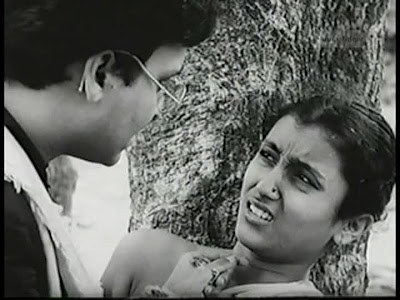 its overly dramatic, manipulative, hand-wringing maa (I did not catch who this actress is, but she's great), 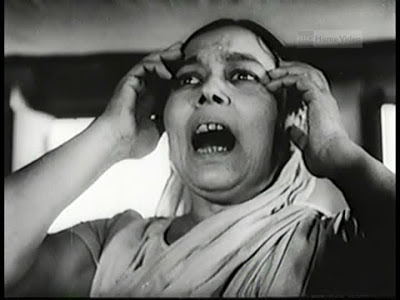 and Soumitra Chatterjee managing to look dignified when sitting still in a suit jacket and otherwise falling all over himself as his character stumbles towards being an independent adult. 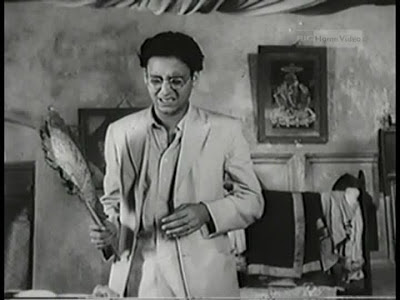 The plot lends itself to humor, of course. Amulya (Soumitra) is home from university and his mother wants him to get married pronto. He goes to meet her selection, but it's a train wreck of mismatch (as you can tell in the picture above). He defiantly comes up with his own selection, the probably no more compatible Mrinmoyee (Aparna), who has earned the nickname Puglee for her preference for laughing and playing in the forest over housework.

I watched "Samapti" twice, trying to figure out where it was going with the afore-mentioned "it sucks to be female" theme. In both viewings I fluctuated between "well, at least the romantic leads seem to really care for each other" and "compromise is necessary to manage the complexities of the world" on one side and "look what happens when a free spirit is caged" and "oh of course she is the one to have to compromise" on the other. What is clear is that poor Puglee had no interest in getting married and nobody gave a fig about her. 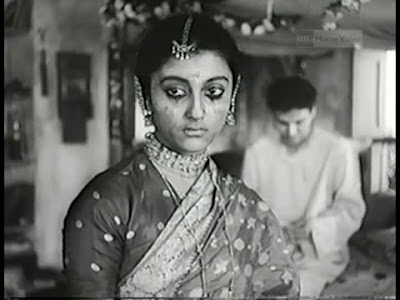 I also cannot tell what Amulya expects of his new bride and whether he has any concept of marriage, of partnership (if in fact that's a term we can assign to someone in this historical context), or even moderately independent adulthood outside what he has gathered from his parents or larger, vague "society." His choice of Puglee for a wife is partly to spite his whining mother, I'm sure, but I think it's also in keeping with his character. He is refined and quiet, maybe even meticulous, 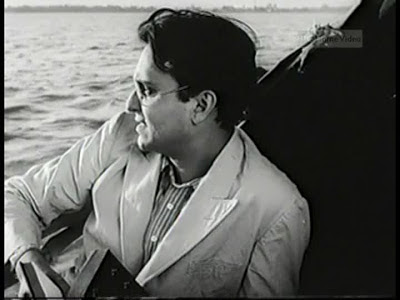 but part of him is drawn to the more animal side of life (note him feeding a cat from his own plate), and Puglee is clearly unlike anyone else he knows. 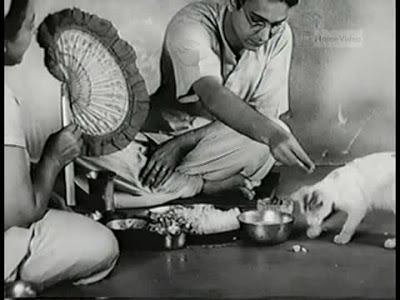 Puglee is repeatedly represented by her pet squirrel, who gives her great joy but also becomes a casualty of what she must give up in order to fit into Amulya's life. The death of the squirrel is a tragic moment in the film, not just for the death of a pet but also for Puglee's squirrel-less lifetime stretching out ahead of her. Being a grown (proper, society-approved) woman requires you starve your child (improper, society-unapproved) self. It's brutal. 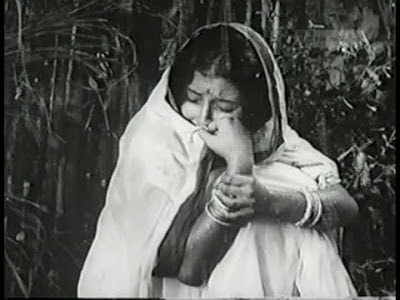 In the above picture, Puglee is crying because she thinks Amulya doens't want her anymore, but this is also what she experiences immediately before returning to his room and thus beginning their married life together. It's easy to argue that she's lamenting more than one thing.

But on the other hand, Puglee is still Puglee, if in a small way, in the film's last scene. The final encounter between Amulya and Puglee takes place only after she has climbed a tree to reach his room. Proper wives don't climb trees, but he is delighted to see her anyway—and, I think, impressed by, maybe even respecting, her methods. There is a great breaking of spirit in this film, but it is not absolutely destroyed. I would love to know what happens to Puglee and Amulya in the first five years of their marriage. Do they go off to the city for him to finish his law degree and she has lots of adventures while he's in class? Or does she get stuck in a tiny apartment with only a sad potted plant to remind her of the forests and rivers she thrived in?

The environment plays a role in this film too, particularly the mud of the roads of the village, making both Amulya and Puglee clumsy in their movements. My first thought was that the mud represents his mother, since it seems to unsteady him and inhibit his motion. Then a twitter friend proposed that it represents the "position of Bengali gentry as regards modernity" and is a "inner-outer quagmire." I cannot claim to know exactly what that means, but I very much like the idea of the mud as a sign of the rural (or uncivilized?) that everyone still uses and depends on and of societal expectations that challenge our footing when we try to do our own thing on top of (or through) them. Basically, you have to deal with the mud, and it's a bugger, but you can get across it if you're careful and don't go too fast. 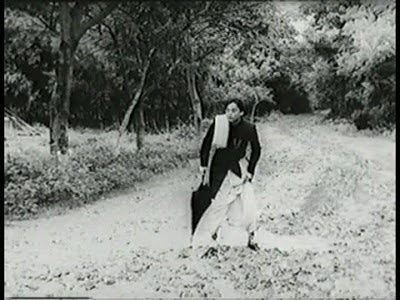 With "Samapti," Teen Kanya ends on a moderately hopeful note as Puglee and Amulya close the door on the outside world and, I wish fervently, all the expectations and constraints that come from it. But then I just keep remembering what happened to the squirrel, and the mud pulls me back down all over again. Any of you who have seen all three of the films, I would love to hear what you made of the connections among them and of the final moments in particular.
Labels: Bengali house favorite: Soumitra Chatterjee Satyajit Ray films superwow thoughts on movies

pi-pu-xi-xu said…
I read the story, Samapti when I was 15, and thought it was wildly romantic. (Yeah, okay, I was a silly teen). I watched the film when I was 21 and was horribly, horribly disturbed by the violence of it. (Isn't there a scene where Soumitra almost hits Aparna Sen? And the caged bird and the dying pet, OMG!)

I think Ray adapted Tagore's story to show the violent crushing of the free-spirited teenager, whereas the story really idealises the apparently free-willed transformation- in the story there is a comment about how a great change in personality can be wrought overnight only by those with great strength in character, when Mrinmoyee changes into the ideal bride/daughter-in-law overnight. Yeah, okay then.

Also, there is no sneaking in via trees in the story. Instead, Tagore pulls a Shakespeare and has Mrinmoyee snuck into Amulya's bed, waiting for him. With the willing collusion of her in-laws, of course. So swittt!
November 11, 2012 10:23 PM

Beth Loves Bollywood said…
pi-pu-xi-xu - I really like that you're using the word "violence" about this film. I don't recall the almost-hitting but the idea of it doesn't really surprise me, since that character seems to act without always thinking things through thoroughly; even without it, there is enough psychological cruelty in this film to justify the word, I think.

That is fascinating about the differences in the story and the filmed version! I'm with you on the "yeah, okay then." Though I do want to read it now, especially for the final scene you describe. :)
November 12, 2012 9:09 AM

karrvakarela said…
My DVD copy (from Mr Bongo films) only had two of the stories, The Postmaster and Samapti. I thought they were bought awesome, although The Postmaster was definitely the more poignant. Such a terrific film!
November 13, 2012 11:08 AM

Unknown said…
Monihara was otherwise dark and gloomy, but Ray managed to end the story with a dash of sly humor there as well. Notice the chillum kept over the stack of manuscript - an obvious reference to an oft-used Bengali phrase "GanjaKhori Goppo" which roughly translates as - 'fantasical tales told by someone high'
July 01, 2017 5:25 AM