- December 20, 2011
I can count on one hand the number of points that I agree with in this piece by Tony Mirchandani entitled "The 70s—Cheap Stunts, Loud Music, Stale Stars"—and one of those is that villains often wear "silver, blonde, or even purple wigs." Some of the observations just don't hold up under the privilege of hindsight; for example, we would probably all agree that Amitabh Bachchan has had plenty of staying power, even if we haven't always applauded his deployment of it. Mirchandani's claim that films and audiences are wildly unpredictable is an interesting contrast to what I feel I hear critics of Bollywood (by which I mean people who don't like it or dismiss it, not the film critics) say in despair of "mass entertainers" today. 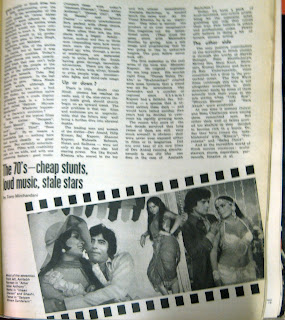 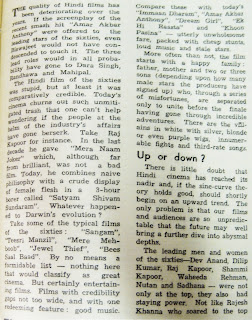 Quickly, before we get rolling, an overview, because I can't figure out how - or whether - to detail any of the basic story arc later in my post. In the fictional country of Bahrestan, a beloved sultan (Shammi Kapoor) has finally had a son (yes, it's annoying that it's a male child that causes the whole country to break out in song. Moving on), and a magician from the friendly land of Hind (Saeed Jaffrey, whose character is named Amir Khan, hee) comes with congratulations and a gift from his maharaja. Meanwhile an evil vizier (Amrish Puri) and his henchmen (led by Dalip Tahil) are trying to seize the throne. They succeed, driving out the royal family and running the good people of Bahrestan into poverty and misery. The royal baby, his parents gone, is raised by a dolphin and a friendly blacksmith and grows up to be Ali (Amitabh Bachchan), who is secretly the super hero/protector of the people/masked avenger Ajooba (pictured above). As he smites the baddies, he says "
Read more