With all this snake-watching going on, how could I have almost forgotten a essssssential serpentine scene from my own cinematic history?

Hey! I recognize that song!
Mary Bennet/Maya Bakshi doing a cobra dance for all of her family, Mr. Darcy, the Bingleys, and Mr. Collins!

Say what you will about Bride and Prejudice, it will always hold a very special place in my heart, partly for some clever migration of Regency social awkwardness of but primarily because it was my gateway into Hindi films. When B&P was released, I was desperate to see it for all the reasons you'd expect of the nerdy white lady with librarian glasses: Pride and Prejudice is one of my favorite novels, and I'm a sucker for any adaptation of a Jane Austen story. One day I went to B&P's official website and noticed that Gurinder Chadha had created a list of Bollywood conventions that she would be playing with or winking at in the film. As I read through the list, I thought "Wow, these sound amazing! Why haven't I seen any?" With a huge love of Monsoon Wedding and Bend It Like Beckham already in place, I spent some time on Bollywhat looking at the newbie guide and then raced off to my fantastically stocked local independent video store (That's Rentertainment, which had everything I ever wanted for over a decade before Netflix existed). Once I was face to face with a rack of over 100 Hindi films, I had a momentary panic before grabbing Lagaan because it was in the Bollywhat starter guide and Mujhse Doste Karoge because of the happy people on the cover. Guess which one I watched first? 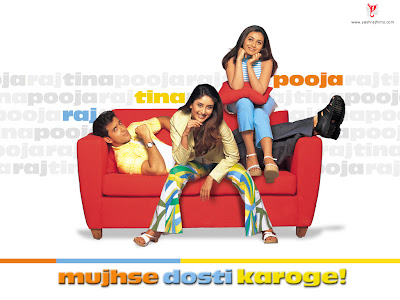 Leave it to Tina!

dustdevil liz said…
It's so fun how all paths seem to lead back to the first film you watched--during Lagaan Week, it occurred to me that my obsession with supporting actors started in that film.

Anonymous said…
I think I might be repeating myself, but MDK was one of my first Hindi films and I loved it shamelessly :)
August 11, 2011 1:26 PM

Beth Loves Bollywood said…
Liz - You should talk to Memsaab about supporting actors. Have you seen her amazing decade-by-decade "yearbooks" of actors? SO HANDY!

And I agree, I have a whole new appreciation for the Cobra Dance now that I know what it's all about :D It's got an extra layer of awkwardness now. Though I must admit I have struck several snaky poses while brushing my teeth etc this week just to see what it's like to walk around with my hands cupped over my head.

Anonymous said…
Liz---I need serious help with the 80s through the present too! :)

Unknown said…
omg! I used to rent from That's Rentertainment too! Did we go to school in the same town?

I think Lagaan was my second or third Bollywood movie, after Kabhi Khushi Kabhi Gham and Kal Ho Na Ho.

Beth Loves Bollywood said…
KC - I bet we did! After two degrees at UIUC, I now work for the university too :) Rentertainment is still goin' strong!

Unknown said…
Wow, cool! I also got too many degrees from UIUC, but I graduated a couple of years ago, and now I live in Boston. I wonder if you were ever in my Hindi class? When I finished my course requirements but still had research to do, I started taking languages for fun.
August 12, 2011 2:31 PM

Unknown said…
Ohh, you should. Especially if your work there can get you tuition discounts (might make scheduling difficult though). I had a great experience in the UIUC Hindi program.

Wow, small world. Nice meeting you! I dig your blog!

I liked Bride and Prejudice too, but it's weird because I didn't watch it until after I'd watched a bunch of Bollywood movies, and I think I was kind of disappointed by the English songs.
August 12, 2011 2:48 PM

Beth Loves Bollywood said…
And to make it even smaller, google plus tells me you know Brian Cudiamat? I work with him! :)

Thanks for commenting and nice to meet you too! I need to give B&P a rewatch at some point, I think - people often ask me what I think of it and I really don't remember it well enough to comment intelligently.
August 12, 2011 2:59 PM