This song is not at all what I expected when I went looking for "Rekha + Dharmendra," but oh boy am I glad I found it! I hope they - and the camera crew - took their Dramamine. 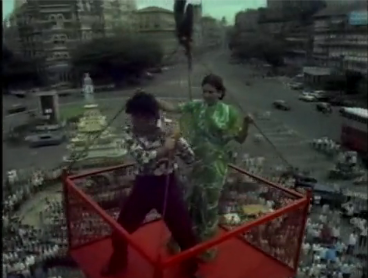 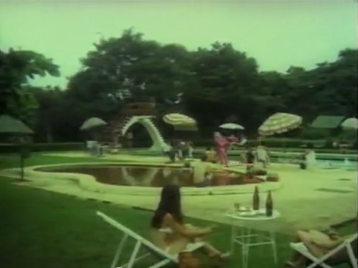 I'm tempted to put forward the theory that an actor in the late 60s, 70s, or early 80s isn't really a star until s/he has been filmed at that swimming pool.

"Rafta Rafta" from Kahani Kismet Ki (Arjun Hingorarni, 1973)
Thanks to Bollywood Deewaana, who has a fine collection of Rekha posts on his site at all times, for posting this. Another song from this film in the same general vein of "Dharmendra horsing around while his heroine protests very mildly" is "Duniya Mujhse Kehti Hai," but it might be notable only for the set designer's use of crepe paper.

The danger of following youtube links is that you stray from your original search because you notice things like a clip from the film Ghazab labeled "Dharmendra annoyed with Ranjit" with Dharmendra doing his word-chewing growly thing at the end. Or you decide to keep looking, hoping for something wackier, and find Rekha looking stunning and sunny - and holding a bunny - while Dharmendra sports fake teeth.

"Ae Hawa Ye Bata" from Ghazab (C. P. Dixit, 1982)
Or perhaps you like your stars younger and more under the influence?

With careers in such juicy decades, I wouldn't doubt there are more wonderful Rekha + Dharmendra clips out there. If you have any favorites, send them my way!
Labels: house favorite: Rekha Rekha Month

Sharmi Adhikary said…
i remember the first song well. but don't remember the story of the film. Rekha looked so different then :)
October 12, 2010 3:39 AM

Unknown said…
Your blog has become somewhat obsessive reading for me...and yes...I would brave a whole fock of zombie chickens to read it. So....you have the Zombie Chickens award from me. Check out my blog and collect it proudly ;-)
October 14, 2010 10:36 AM

Beth Loves Bollywood said…
Sharmi - She really does, doesn't she? As I've been digging around youtube I have found things that I can hardly recognize her in.