interval: this music break brought to you by the Curry Smugglers!

One of my two favorite sources for a contemporary South Asian music fix (the other being DJ Ash on Beats from the East), especially good for chair dancing at work, The Curry Smugglers are back with a new season of shows and a shiny new website, too. 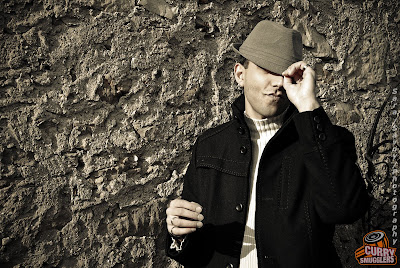 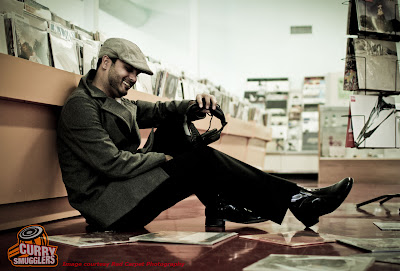 To celebrate, I took a quick break from Neetu Singh-Along to talk to the Curry Smugglers crew Paresh and Sachin about movie culture and its influence on making and listening to music.

Beth: Do you think that the music culture within the Indian popular film industries encourages musical innovation? Do films actually provide creative opportunities and/or material for musicians? I feel like I hear a lot of samey-samey, but maybe I'm not listening to the right people.

Curry Smugglers: This is an interesting question! We feel that this is a double-edged sword. You are correct in that a lot of the music coming out of the industry is "samey." The challenge the industry faces is the fine line between pleasing the masses and then trying to evolve to a new sound that works for the generation they are serving. Frankly, it's a challenge for us as well.

Films with an open-minded producer and a brave director will have inevitably have good music. A recent example is Amit Trivedi's forays with Dev.D and Aisha - very unique albums and also slightly pop-like, but it worked out for both those movies. Salim-Sulaiman are always known to try new things by tweaking their styles versus doing an out-and-out tear=down of their style every movie. Paresh prefers their background music work more. Mithoon is another winner with Lamhaa etc.
Beth: Makes sense. You need someone with ideas, skill, and some sort of will to make things happen, no matter what the creative endeavor is, don't you?
Curry Smugglers: As we said, it's not about the musicians in this case as much as it's the strong backing of the machine behind the film. Regardless of language and sub-culture, it requires a ballsy producer and director to let the musician create. That's when the best music will be created.
Beth: I think my whole life needs a open-minded and brave director. Speaking of the importance of particular individuals...let's say you known someone who is a big fan of popular films (Bolly, Tolly, whatever) and their songs and they want to know more about South Asian popular music. What 5 artists would you point them toward?
Curry Smugglers: Wow! Could you ask a tougher question? You'd get different answers from each of us. If you were to ask us who to point you to right away for a directional change in listening habits we'd say go check these people out
For artists, we recommend:
1) SWAMI
2) Shafqat Amanat Ali (his non-film work)
3) Rahat Fateh Ali Khan (his non-film work) (Nusrat Sahab is a good place to start first)
4) Karunesh
5) The Midival Punditz
These artists need no introduction. Every one of them has had an influence on music in their own way. SWAMI refuses to be the same for every album they do. They take their desi roots and morph/evolve them into sounds that are fresh, funky, and always epic. The same with Karunesh and the Punditz, you can never go wrong with them. When it comes to soulful pipes and heart moving compositions, listen to Shafqat and RFAK/NFAK.
For DJs:
1) DJ Dev
2) DJ A.Sen
3) DJ NYK
4) The Plus91 crew
5) DJ Nawed
6) DJ Mandro
7) DJ Mazzr

Beth: That's more than five, but in the spirit of masala, I'll let the "more is more" approach slide. How did you choose those? What would you encourage this newbie to listen for and think about as they branch out?

Curry Smugglers: It's subjective. Both of us look for the intricacies and technical kicks in tracks when it comes to the DJs' work. Plus, will it fill a dance floor and pack a club? Will you repeat that mix incessantly?
Beth: As someone who still turns to the Bluffmaster soundtrack when I want to boogie, I love having tour guides like you two!

Catch the opener of Curry Smugglers season 4 on Sunday, September 19! Here's a description of the season ahead from the boys themselves:

Season 4 of the Curry Smugglers brings you, as usual, the latest and greatest productions of artists and DJs from all over the world who have a decidedly South Asian bent or influence. After 3 ridiculously successful seasons of the show, Sachin and Paresh return with an emphatic season opener. Featured in this episode will be a no holds barred interview with members of the organizing committee of the first ever Chicago South Asian Film Festival (CSAFF) alongside Reena Shah (Sita Sings the Blues, My Pet Dragon) and Ajay Naidu (Loins of Punjab Presents, 30 Rock, Office Space). Ajay co-wrote, directed, and starred in Ashes. This film is being featured as the centerpiece of the festival, which runs October 1-3.

Curry Smugglers is one of the promotional co-sponsors of the event this year and will be building a deeper relationship with the festival in the future. As for the show itself, the guys have a line up of fantastic interviews, killer remixes/tracks, and even more shenanigans than last season lined up. It's a great time to be a Curry Smuggler fan!