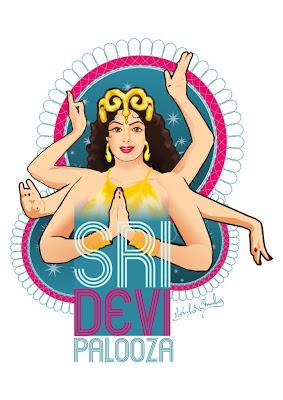 After Bollystalgia and others curate a collection of Sridevi's finest works (define as you wish), I will be more than happy to dig into her filmography. But before? No. Hell no.

The Sridevi films I am able to get my hands on tend to be from my own personal Era of Doom, i.e. circa 1984 to 1998, Mr. India aside, and as much as I want to participate in group projects and learn more about a star with whom I am so ill-acquainted, I even more want to avoid-yaar the pants off of 1984-1998 unless guided with precision and care. So with no DVDs handy but wanting to contribute, I decided the safest approach for me was to explore clip by clip. Lured by Temple and others who have a taste for outrageous and spectacular song picturizations, lately I've been wading far into the depths of youtube by clicking link after link in that ominous but irresistible column labeled "suggestions." My experiences in the never-ending cinematic Choose Your Own Adventure of remarkable, if not always perceptibly affiliated, links made me confident there would be a ton of inspiring Sridevi songs and scenes out there for me to write about. But how to choose? The connections between the principal video on a page and the suggestions youtube throws up (ahem) are not always clear to me, but in the spirit of discovery and wonder - of -palooza! - I wanted to avoid getting a chain of clearly associated clips, like a group of songs from the same film or all featuring Sridevi with the same hero. Instead, I went with a random approach. 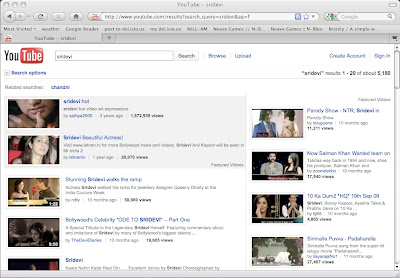 Stay tuned over the upcoming week to explore these random treasures with me! The stops along our journey span the 80s and 90s and include the curious "part 15" of a film in addition to the expected songs. Among our traveling companions are usual suspects Anil Kapoor, Sanjay Dutt, Jeetendra, and Mithun. And as a video teaser, here's #6 in my random selections:

jaunty flapping side-by-side steps with Jeetendra in "Baagon Ki Tu Rani" from Jaani Dost (1983). Try to make it past his tight-white-jeans-encased thrusts at 0:20 to revel in the really subtle symbolism from the natural world and the really silly musical effects from the synthesized world of Bappi Lahiri. In addition to the completely unexpected cameo at 1:20 - seriously, it's worth it, I promise (especially for you, Todd!) - this movie also stars Dharmendra, Parveen Babi, Bob Christo, and Tom Alter, and dangit now I think I might actually need to watch it. CURSE YOU, INTERNET!*

memsaab said…
You may need to extend your personal Era of Doom to include 1983.

Amaluu said…
Just wait till you get to the huge song/dance numbers with props like brass pots, feather dusters, and giant severed hands. The 80s was AMAZING!!! Just you wait, you WILL end up loving it!
August 13, 2010 9:14 AM

Heqit said…
Beth, it's like you can READ my MIND. Sepia Mutiny had a link to a Sridevi song in a recent post (the awesome and amazing "Main Teri Dushman" from Nagina), and it made me think that I really need to watch some Sridevi movies. Except -- which?! Other than Mr. India, I don't know where to start. So I love your YouTube spelunking idea, and I'm definitely going to try to follow Sridevipalooza everywhere it occurs. It's for my own good.
August 13, 2010 7:10 PM

Bombay Talkies said…
Heqit--I read the Sepia Mutiny post too; Main Teri Dushman was my introduction to Sridevi, and what an excellent introduction it was! :)
August 13, 2010 11:01 PM

Heqit said…
@Bombay Talkie -- Exactly! I feel the same way. I watched Main Teri Dushman and was just enthralled. She's amazing, and now I'm sorry that the only '80s Bollywood movie I've seen is Mard. (Which I love, because it's awesome, of course. But I've missed out on Sridevi! Until now.)
August 15, 2010 8:54 PM