lunchtime poll #10: Bachchan and beyond

When someone says "70s film hero," it's hard not to think of the Angry Young Man right away. Even I, proud holder of a cabinet position in Shashi Pradesh, can plainly see that Amitabh Bachchan has run away with the stardom of that decade, much as I love his frequent co-star and better half. But the more films I see, the more I learn about who else was a big name of the decade - and, more interestingly (at least for me), what values and ideas they represent. Back in 2005, Nina Patel did a great piece on this very topic in EGO Magzine called "Hero: It Takes All Kinds to Make 70s Bollywood Leading Men". "Compared to present day Bollywood, the 70s offered a far larger variety of protagonists played to exquisite perfection by actors who understood that the hero is as much a flawed man as the knight in shining armor." She outlines types with their major representatives: AYM (Big B), bad-ass dude (Feroz Khan), dapper and debonair (Dev Anand), and - hold on to your neckerchief for this one - sensitive lovin' (Shashi). 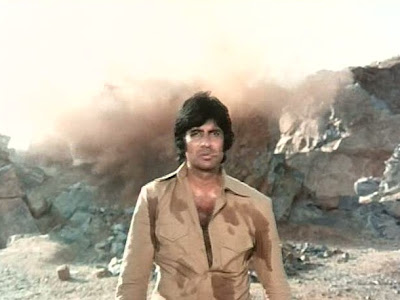 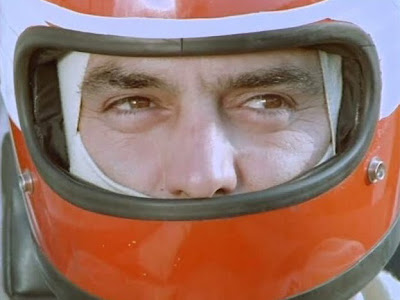 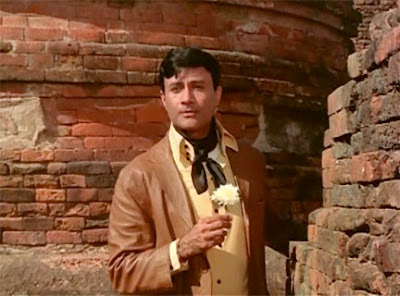 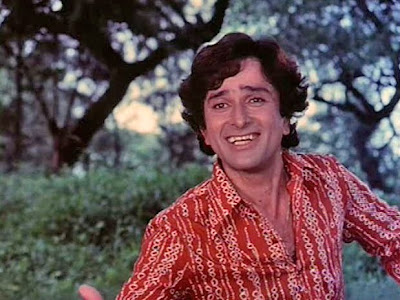 So read, ponder, and let's discuss our choices for quintessential 70s heroes or hero-types! (No need to stick to four, either.) I haven't seen any Dev Anand movies from the 70s so cannot weigh in on him, but the other three brands resonate well with my film-viewing experiences. I adore that description of Shashi, and it sums up much of what I like about his better-known characters (though it's almost the total opposite of his first big hit in the 60s, Jab Jab Phool Khile). Of course, Shashi played many kinds of characters over the years, even just in mainstream films, but this is an effective evocation of the ultra-Ravi type. How do people like Dharmendra, Shatrughan Sinha, Rishi Kapoor, Vinod Khanna, Rajesh Khanna, Manoj Kumar, and Sanjeev Kumar fit in? And do you think it's true that 70s heroes were a more diverse crew than today's?
Labels: house favorite: Shashi Kapoor lunchtime poll seven days of 70s

Rum said…
For me it my hero type would be the funkadelic Feroz Khan, who always brings the funk and swagger to all his roles! Though i swear my allegiance to Manoj, his Bharat persona seemed like a put upon 60's hero that changed and got angrier with the nation in the 70's!
February 25, 2010 1:45 AM

I love 70s movieS..My fav actors all the time are Amitabh,Feroz Khan ,Shatrughan Sinha ... Also I lovw watch movies for Sanjeev Kumar,Raj Kapoor,Shashi Kapoor and Mehommod he is sooo funny..

But actrees parveen only..actrees in 70s,80s and 90s they don't know how to act

Anarchivist said…
This is a very interesting question, and one which will require much thought. I think in general, filmmakers today are tending to play it safer, and part of that is this notion that everyone must look like a fashion model, female or male. I have no idea if Hindi cinema borrowed this from Western cinema, or if they got it from the same place we did, wherever that is.

It's not that the modern pretty people can't act, because many of them can. And it's certainly not that the '70s weren't full of awesome manly eye candy, because they were! But it seems to me that there was a wider variety of eye candy available, to suit different tastes.

Anonymous said…
Dharmendra!!!!!!!!! For me the seventies is all about Dharmendra. I just adore him in whatever he does.

I too think that the heroes today are not nearly as varied and interesting...and the ones who are interesting are almost all over 40 at this point. But that could be my viewpoint because I am such an old bag myself (thanks for pointing out via your birth year how very old I am) :D

Pessimisissimo said…
Beth, thanks for having the inspiration of 70s Week!

I haven't really seen enough 70s movies to comment intelligently on your question. But (not letting that stop me!) it seems to me that one difference between 70s heroes and those of today is the element of a larger social context. The Big B was the Angry Young Man, but he was made angry because of the injustices of poverty, prejudice, discrimination and corruption.

A sweeping generalization to which there are many exceptions, of course. (Aamir in Rang de Basanti comes to mind, though I think that film is problematic.)

Todd said…
Well, you know I'm all about FK, but I'm surprised that the EGO article included Dev Anand as a 70s male archetype. Seriously? From what I've seen, Dev's era of maximum cool was the 50s, and in the 70s he was desperately clawing to hold onto relevance, with often embarrassing -- and creepy -- results. Just sayin'. Though I do love Warrant and Kalabaaz.

Also, I think that Vinod definitely deserves to be in the top tier of 70's men, though he's a little harder to stereotype than the others, as he comprises equal parts AYM, badass, and sensitive Shashi-type.
February 25, 2010 11:25 AM

Shalini said…
The one "type" whose disappearance I lament the most is the "middle-class hero." And really every actor in the 70s, from Amol Palekar to Rishi to Amitabh played that part in some fashion or the other. I miss these guys.:-(
February 25, 2010 11:25 AM

Seriously though, the one thing I notice about the heroes of 70s that is missing from today, is the essential manliness (not in character but in looks) of the actors. Today's heartthrobs all look like sculpted boys who stopped growing at age 22, even the 40 something actors! And nobody has the kind of sex-appeal that a Vinod Khanna or a Feroze Khan or a Kabir Bedi had back then - but that could be just my hopelessly biased view!
February 25, 2010 1:57 PM

Amrita said…
Hell yes, the 70s were more diverse and the heroes were doing all sorts of work! We have a famine compared to the feast they had then. I'm sure everyone back then was bitching and moaning about standards the way people always do, but hindsight is 20/20.

And while I agree with Todd that Dev Anand has no business being on that list, he did fulfill the quota for socially conscious lech. So... um, whatevs.

However, I do think that we're now entering a golden age of sorts because the Hindi cinema scene has definitely laid the foundation for a new era through the Noughties. We're not quite there yet but with all the interesting directors who made their debuts in the past ten years and all the top heroes who've come into their own over the same period, the time is nigh for another renaissance imo.

Brian Naas said…
I have to admit that my 70's movie choices are driven by the females much more than the guys. Shammi was done by the 70's, Dev Anand had gone into his weird headgear creepy smile phase, Rajeesh a little too soft, Amitabh a little too hard and iconic honestly, Feroz Khan thinks he is way too cool, don't shoot me but Shashi is the white bread of Indian actors; totally uninteresting - but for me Dharmendra is the one guy I can take any time - he is sort of an everyman - he can be the man in black or just a regular guy in love. He never overacts because he probably would not know how to - he is the guy I'd want to have a beer with of all these guys. Shashi would be calling his mom every two minutes, Feroz would spend much of the time leering at the ladies, Rajeesh would go into a funk - but Dharmendra would sit there and drink with you.
February 25, 2010 11:34 PM

Kanan said…
I've got multiple choices. I loved Shashi Kapoor, Rajesh Khanna, Dharmendra and quite a few other men from this era. Amitabh Bachchan is also on the list and so is Sanjeev Kumar along with Amol Palekar for completely different reasons, of course. Oh and not to forget Vinod Khanna!! :D
February 26, 2010 1:48 AM