I'm just not that into it: Swayamvar

Once again, my plastic robot heart remained mostly unmoved by a Shashi movie PPCC seemed to like and respond to so much more than I did. Parental wishes are fulfilled, the memory of ancestors/old friends is remembered, people learn things, uppance comes, kuch kuch lovey-dovey happens, true identities are obscured and false ones are perpetuated, fires are set, punches are thrown, rape is threatened, blah blah blah. Nothing unexpected here, and they're all fine ingredients (except for the rape thing) in what feels like a half fairy tale/half masala blend. But...enh. Swayamvar did nothing for me. There's nothing really wrong with it, but nothing in it really stands out, either. PPCC's and Memsaab's posts are much richer than mine is going to be, and I'm about ready to say I liked reading them more than I liked watching the movie.

I did not care for:
There's stuff about husbands being wives' protectors, the film seems to criticize a woman for being angry that her husband reveals on his wedding night that he isn't who he said he was, and a strong-willed female character is domesticated. Shashi seems to be phoning in parts of his performance as Charming Bourgeois Smoothie, possibly coasting on his looks and fluency in this general type of role. When I first started watching Shashi movies, Aspi warned me that sometimes in the later years of his leading man career, "it wasn't unusual to see him sleepwalking through an entire movie and flashing his megawatt smile whenever he needed to be, uh, starrish." That phrase rang through my head throughout this film. I'm not positive that some of this was not called for by the script - he's a Charming Bourgeois Smoothie playing a slightly different Charming Bourgeois Smoothie who then pretends to be an Alcoholic Nobody, which confuses what his actual character is. He and Sanjeev Kumar both have about five minutes of being "themselves" before the wacky scheme kicks in, so the viewer doesn't have a chance to know much about the real Laxman and Ram (yes - but no women named Sita, thankfully). What's an act and what's for real is not always clear, but not in an intriguing way. He's not exactly bad in it, but I found his performance lacking in genuine oomph. Don't get me wrong: I love the stock Shashi Kapoor tricks - vocal gymnastics ranging from growl to squeak, striding around confidently and handsomely in a suit, breezy yet intense canoodling, facial contortions - 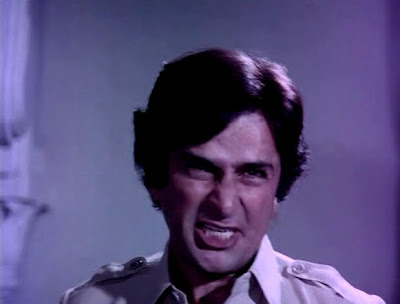 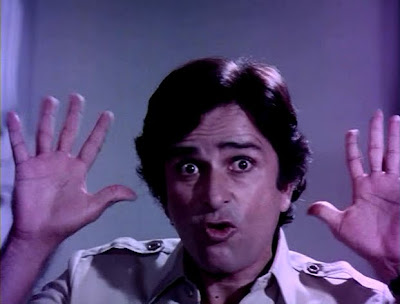 but somehow their combination and execution here were just not up to snuff. It didn't help that I found his character totally annoying; the wacky scheme he uses to try to fulfill his dad's wishes and win over his girl (Moushumi Chatterjee) is irritating (I'd file it under Really Stupid Ideas) and, worse, mean to her.

Also, if you do watch this film, try to find a version other than that released by Sky Entertainment. I don't know if the problems were due to the print or something the DVD people did, but the color leaps all over the place, some scenes are so dark you can't see actors' faces, and the sound has a weird echo-y tinge.

but I did like:Sanjeev Kumar's performance and character are much more enjoyable than Shashi's. As PPCC says, his smile is charming and overall he's endearing (though in a more paternal than hero-ish way, to my mind). Watching him beat up Ranjeet is pretty hilarious. Shashi sometimes puts The Voice to good use, and his drunking/dancing in "Aap Aapne" is a darn good time. The two of them together are very nice, and there's a great exchange done entirely in whistles (which then is reprised in the following song, "Ek Mahal Ma Chum Chum"). Asrani is used sparingly and effectively. Ranjeet is both disgusting and funny in his brief time on screen. In case you didn't know he was baaaaaad, here he is throwing gasoline on Nadira's room (while she's in it) and tossing in some lit matches. 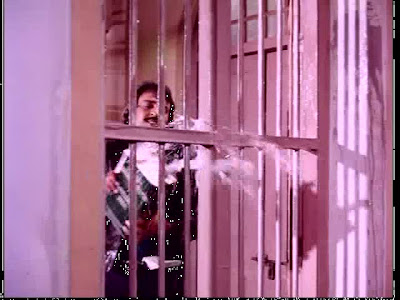 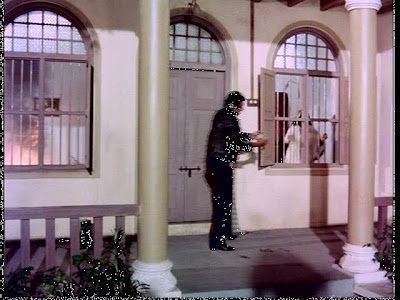 He too gets to act drunk a lot. The wardrobe department apparently used Moushumi to usher in the 80s single-handedly, putting her in a metric crapload of glassy lipstick and giving her proto-Madhuri curls. The movie overall is funny in parts. It has a pro-women song! We learn what happens if you sleep with Shashi Kapoor: you walk around the next day like you're in a shampoo commercial! That is how wonderful life is! 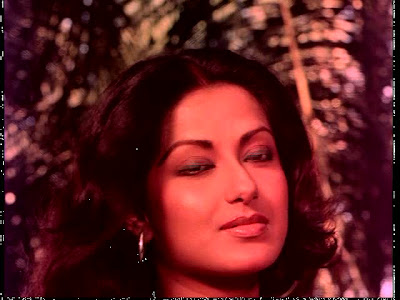 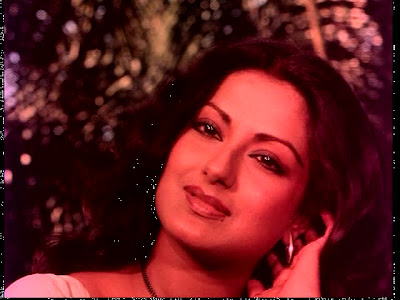 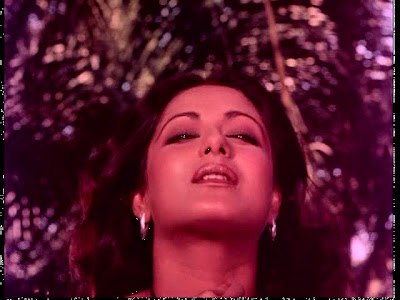 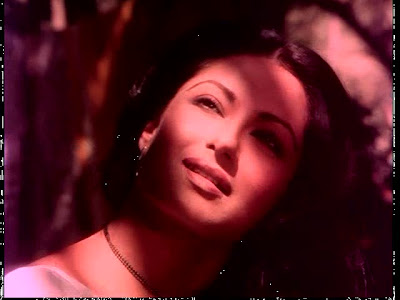 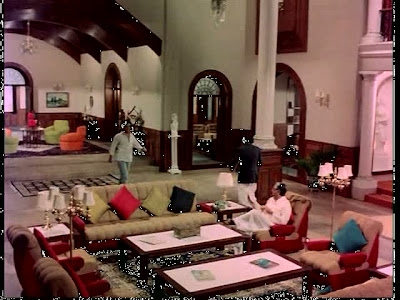 Before I dismiss this particular DVD release entirely, let me praise it for the titles given to chapters 20, 21, and 23: it can't get much more masala than that! 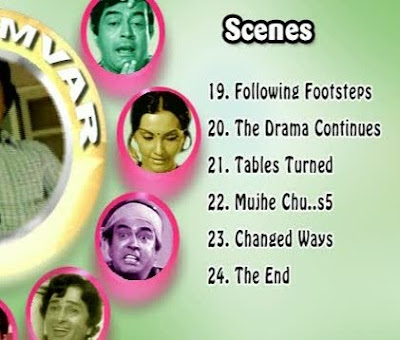 so:
David Sedaris has a story about teaching writing at the Art Institute of Chicago in which he mentions that a student once submitted an assignment that used the word "whateverishly." I'm all for making up new words, and this one often comes in handy. I feel "whateverish" about Swayamvar. I don't regret the time I invested in it, but it's not going on my re-watch list anytime soon.

And now that I've mentioned it, wouldn't it be fun to discuss what David Sedaris stories might work well with the naach-gaana treatment?
Labels: house favorite: Shashi Kapoor thoughts on movies

Anonymous said…
I wonder if David Sedaris watches Bollywood???? They seem kind of tailor-made for each other! He would write really FAB reviews.
August 23, 2009 8:41 AM

manythoughts said…
Hi Beth,
One Shashi Kapoor movie you should see is 'Duniya Meri Jeb Mein'. It's probably the only one where Shashi and Rishi Kapoor co-star as brothers!

I watched Swayamvar a while ago, and like you, I enjoyed the Sanjeev Kumar-Vidya Sinha Cinderella-esque track much more, than the Shashi-Maushami 'Taming of the Shrew' thing, which I found both silly and insulting to the female character. And the scenes with the two male leads together were pretty good too.
September 03, 2009 7:33 AM

Beth Loves Bollywood said…
memsaab - HE WOULD. He'd be able to get right to the essence while still appreciating and elaborating on the good parts of the crazy!

manythoughts - I've seen that one! Post here. I liked it okay, and Rishi and Shashi together are very very cute.