In celebration of Shashi Kapoor's 71st birthday, here are my current favorite Shashi performances. One thing I love about Shashi, and about being a fan, is that I never know when a new favorite will appear. It can happen at any moment, in any of the kinds of projects he did, in any of the decades he worked (and since he started working at age 6, you have a lot to choose from). As Indie Quill says, "This is why Shashi Kapoor is so awesome. There aren’t a lot of actors out there who can bring out the amazing so consistently for so many years." Here are the five that have impressed me most so far. 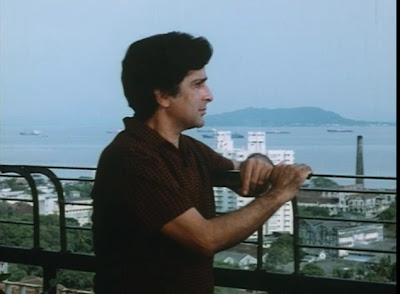 Karan Singh, the tragic outsider in a story of family conflict, is the role of a lifetime. He's hard to figure out - I certainly didn't understand what makes him tick throughout this film, especially as his knowledge grows and his security and certainty unravel - but his longing and pain are so clear. A subtle and heartbreaking performance in a rich, impressive film. 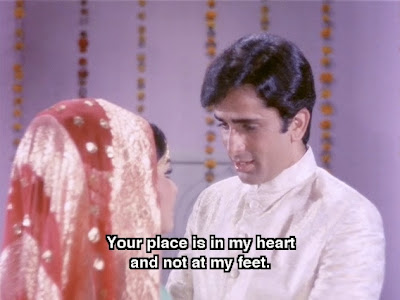 No matter how many times I watch this, I'm always finding something else interesting in the movie, particularly in its messages about traditional and modern female archetypes (Rakhee in a double role) and the male archetype (Shashi as a poet-soldier). I don't love Captain Ajith the way I love Kaalaa Patthar's Ravi, or even Ashok from Pyaar Kiye Jaa, but I love how Shashi portrays him working through his opinions and passions. He also plays smitten-kitten in a most toe-curling way.

Shakespeare-Wallah
This movie wins all sorts of awards from me and broke my heart in such maddening, saddening ways. I don't want to watch this one over and over like I do Sharmeelee or Pyaar Kiye Jaa, but I think about it all the time. Sanju is indecisive, snobby, petulant, and ultimately incapable of living up to his love with Lizzie (Felicity Kendal). 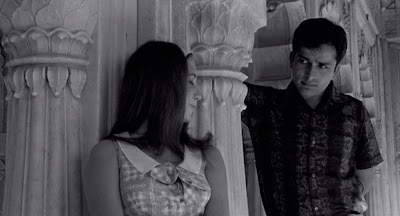 He's the kind of partner any sensible person should run away from screaming, yet he's totally magnetic and their love is definitely real. Lizzie and Sanju are the centerpiece in a fascinating swirl of questions about cultural differences, personal effort, and undersatnding other people. The icing on this compelling Merchant/Ivory/Jhabvala/Kapoor cake is the fascinating potential insight into the Kendal/Kapoor worlds and relationships. 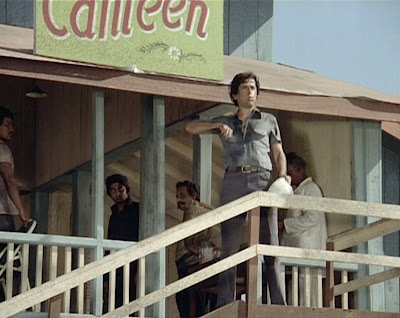 I've already written at length about how Kaalaa Patthar's Ravi is my ideal film character, service-minded with brains, heart, justice, and humor. I think I would have loved Ravi no matter who played him, but Shashi seems born to it - calm, confident, affectionate, book smart, good with words, and noble. Ravi is the best possible Shashi Kapoor 70s hero - and he's not even anybody's long-lost son or goody-goody brother! There's not a trace of suck-up or pathetic puppy-dog eyes about him - the type drained of impurities, simmered to its essence, and baked to golden perfection.

Here's a sample scene: after a few clashes of ego and ethics, Vijay (like I even need to say who this is) and Mangal (Shatrughan Sinha) stare each other down in the café, with the poor waiter Gyan caught in the middle, clutching the disputed cup of tea, as the background brass blares ominously. Ravi appears and quickly ascertains that there's no good way out. He strides up to the waiter and, as a smooth saxophone line floats quietly, interjects himself physically between the opponents "You'd better give it to me. I haven't had any since this morning, so don't mind, fellas. Great tea, Gyan. Hey Vijay, will you bring those papers to my office now." He says thank you to the waiter, puts down some money, and leaves. The synthesizer takes over and plays a descending bass pattern as Vijay gives one last meaningful stare and walks away.

It's a perfect moment in the context of this story and these characters, with the shots and music and dialog (including the unspoken exchanges through facial expressions and body postures) and even the wardrobe (everyone is in dingy, coal-smeared neutrals except Ravi, who is in clean, pressed blue) all coming together. At first it may seem that Ravi is snobbishly pulling rank, but he's really throwing himself on a ticking time bomb for the good of the whole community. 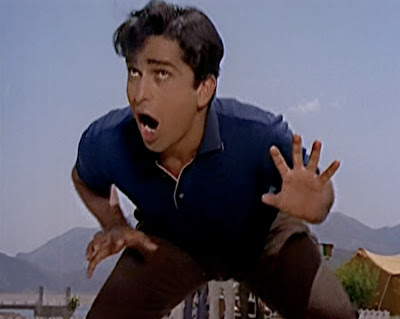 It's just so much fun, so much squeeee-inducing, dance-and-sing-along-inspiring, hip-swiveling, charming, flirty, sassy, cute-drenched fun. Its finest jewel is "Kehna Ki Nahin Bat," one of the best 60s songs EVAH (and a shocking re-do of a Tamil original, which is only less super because it doesn't have Shashi).

All the other Shashi songs in this movie are fabulous too, covering the stages of love from flirting over a bike tire pump to sighing wistfully in nighttime separation to "hurrah! we're in luuuurve!" rejoicing, though they involve fewer animal noises.
Labels: house favorite: Shashi Kapoor Shashi Week 2009

Shweta Mehrotra Gahlawat said…
This IS turning out to be a really fun week. Wallowing in all the Shashi love is pure brilliance.
March 18, 2009 12:16 PM

Anonymous said…
Oooooo that wedding scene in Sharmeelee - wish my imagination could be as vivid as Kanchan's!

Re Shakespeare-Wallah, surely Sanju isnt all that bad? For his time and place, I thought he was pretty spot-on (I have a feeling that Shashi really was like that in real life!) and I loved the end because they didnt try to force a "happy" ending. Wonder if Jennifer ever thought she should have behaved like Lizzie?
March 18, 2009 12:24 PM