Two touching stories run parallel throughout Dharmputra. In the larger, contextualizing one, India stands on the brink of independence and partition. In the other, the unity of a multi-generational family/friend group is threatened as the college-aged son grows increasingly fervent in his Hindu nationalism. As I write this, I'm realizing the family works as a personal-scale mirror of the much grander political and justice issues simmering in the background story, with the son linking and stirring things up in both. Very clever, novelist Acharya Chatursen Shastry! 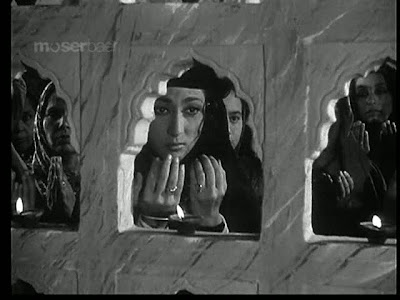 Her father Nawab Badruddin (Ashok Kumar in a silly beard) disapproves of Javed's status and banishes him. 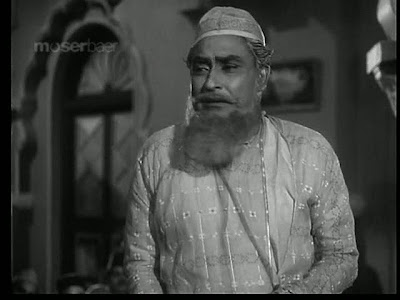 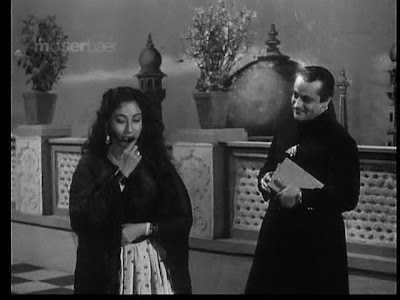 But not before Bano and Javed get pregnant! Distraught at this risk to his reputation but also sad for his daughter's plight (which he caused, but never mind), Badruddin takes Bano to his best friend's son, Dr. Amrit Rai (Manmohan Krishna), for care. It's out of the question for Bano to keep the baby, so Dr. Rai and his wife Savitri (Nirupa Roy) adopt the baby and raise him as their own. Meanwhile, Bano and Badruddin go on a religious pilgrimage, where they run into Javed, and in a moment of epic dil-squish, all is forgiven, and Javed and Bano get married. This small Muslim family moves in next door to the Hindu Rai family; over the years the Rai household is joined by three more children (twin boys and a girl), while Bano and Javed remain childless. Fast-forward about twenty years, and Bano and Javed's son, Dilip (Shashi Kapoor in his first role as an adult), has become a law student, poet, and freedom fighter. 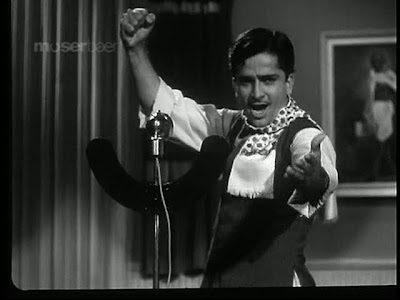 I've seen this image a dozen times and somehow assumed he was playing a radio star vamping in for the press, despite the helpful clue of the portrait of Gandhi in the background.
His two mothers (one adoptive, the other biological) and younger sister Rekha (Tabassum) meddle to get him to fall for Meena (an adorable Indrani Mukherjee), the girl they've picked out for his marriage. 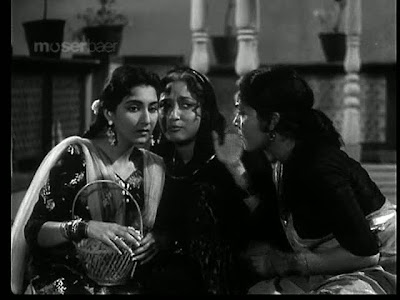 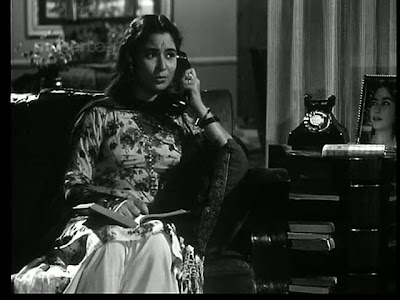 As Hindu/Muslim tensions mount as partition nears, Dilip's extremism threatens the stability of the family group, as well as the safety of the city. 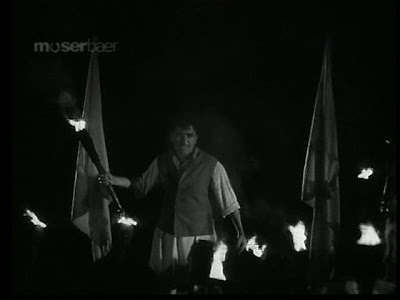 I hope there's a book or article out there somewhere that traces the development of the standard masala elements (by which I mean the ingredients in quintessential 70s movies, the things that make Foundation Masala what it is); I also hope this movie is included in it, because it's full of them. Making up the rich proto-masala:
But these elements are handled so differently than they are in, say, Amar Akbar Anthony or Immaan Dharam! There's a lot of heart but absolutely no wackadoo in this movie, making it feel much more like melodramatic social commentary than any kind of romp, no matter how big the message.

Dharmputra is such an earnest project that it feels very small and heartless to criticize it in any way. However, as a "nonbeliever," as our new president likes to call people like me, it's pretty tiresome to get hit over the head repeatedly with the idea that you have to have faith in order to be a true citizen of the nation - and at that, you had better be Hindu or Muslim, because no one else exists. This is understandable given the setting of the story and the characters in it, but annoyingly exclusive it remains. As Indie Quill pointed out about Immaan Dharam, it's not about plurality as much as it is about harmony, and from what I understand of Yash Chopra's personal history, it's totally understandable that he wanted to make a hopeful (if simplified) statement about partition. I think it was during the qawwali "Yeh Masjid Hai Woh Butkhana," with lyrics about having faith being far more important than the particular flavor of faith, that I got peeved with the over-identification of religion with civic participation and worth as a human (though it's a nice song otherwise).

On the other hand, somewhere else in the movie, a character wonders if religion is more important than the individual! Whoa! And Dilip, the character who behaves in the most ugly way towards others in the name of his faith identity (which is of course scrambled up in politics in his adolescent head), is perhaps sympathetic but certainly not treated as heroic, and the rest of his extended family teaches him the errors of his blinkered, bigoted ways. In Dharmputra, religion seems to be more about identity, about us/them, than about tenets or principles. (The British, of course, are just plain wrong and evil and vaguely Dyer-ish.)

I was also struck by how the public gatherings more often than not excluded female voices from their harmony. 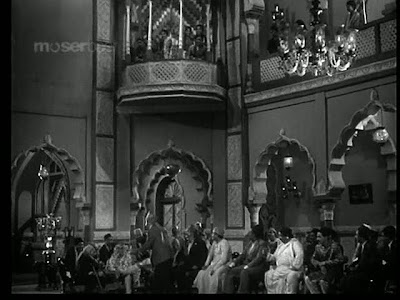 In the scene of Dilip's speech at his college, everyone assembled is a freedom fighter, but men and women sit on separate sides of the room - let's not be too revolutionary. Fortunately, at home the women are very proactive and speak up constantly, choosing to work together out of love and for the greater good of the next generation or the community. In this sweet scene, Savitri reassures Bano that it's perfectly alright for them to eat from the same plate despite their religious differences. 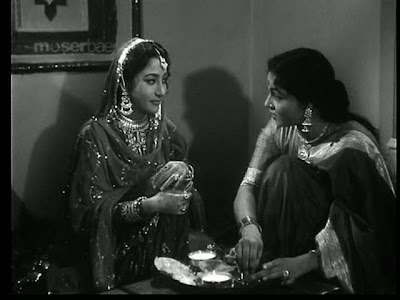 Other:
I think Dharmputra tries - and mostly succeeds - to demonstrate how some hard lines, like Dilip's, are dangerous and others, like Savitri's dogma-trumping love and respect for family and neighbors, are constructive (at least in the contexts of building and maintaining national identity and the family, its small-scale mirror). This is such a lovely idea, and one so often difficult to pull off (I know I can't always remember it in my own life), that the movie's oversimplifications are forgivable. Even its flaws seem very heartfelt. The cute family/friendship energies and the sweet romance root the film in a feeling of everyday and personal that re-balances the it when it teeters towards (but never quite tumbles into) facile patriotism. Add in a cast of dimensional characters and strong performances, and the whole thing proves very satisfying.
Labels: house favorite: Shashi Kapoor thoughts on movies

Anonymous said…
Its certainly a very earnest movie and takes such a novel approach to get the message of harmony across, that I feel bad for not liking it more! The messages it conveys are awesome - it blames Hindu patriarchy for suppressing women (I loved how Nirupa Roy voices sentiments that even today are a total no no in Bollywood!); it refutes religious persecution and forced conversion of Hindus by the "Muslim invaders" (yes, even today the Hindu right in India voices those sentiments); and best of all - it has a father who not only does NOT throw out his daughter for "getting into trouble" but actually shoulders some of the blame and makes amends (unheard of in the 60s!). I think the problem is that it tries too hard to convey too many things in too short a time. Perhaps in the book the story didnt feel like every event and every scene has a moral!

Babasko wasnt the only one to run into trouble with the DVD. My legal Yash Raj DVD of this movie also wouldnt play! I had to resort to a bootleg version from my local Indian video store.

bollywooddeewana said…
Great write up, the resaon the men and women were apart is because it's part of Islam to have Men and women sit and worship seperately within the space of Religious confinements.

B'R Chopra is definitely one of the greats of Hindi cinema, i strongly recommend some of his other work

I find it a good movie and I feel less hit over the head with a blunt instrument than I have felt in some other message-movies. I also think the painted backdrops tend to work better in black and white than in colour.

A minor pedantic moment: Dilip has two brothers and a sister; the twins are the two brothers.

As for casting women who are far too young to be their son's mother (Nirupa is, too), it made more sense to me here, as such a large part of the movie takes plays while he is either not borne or a toddler.
March 27, 2009 2:51 AM

ajnabi said…
That screencap of Mala Singh is absolutely gorgeous. It sounds like a lovely movie, but the disclaimer (or whatever) at the front of the film is utterly awesome. That will now become my catchphrase upon displaying any creative endeavor.
March 27, 2009 8:27 AM

That dancer in the picture is Sashikala. I notice some one else has already identified her for you.

I think carla or memsaab have also reviewed this movie - haven't seen it tho.

Anonymous said…
I have not seen this but want to weigh in as someone else HUGELY interested in the history of the development of the masala movie-story form.

No doubt wrong place for this but - to keep it simple - what is the earliest masala movie anyone has seen?

For me it's Shree 420, though I suppose that one is arguably a social drama with a romance and music, it doesn't really have buffoons or fights or extra plots.