SRK's Temptations Reloaded concerts in Germany (and Spain) have been canceled just a few days before the first performance, apparently because the promoters failing to fulfill part of their contract. The Bachchan & Co. Unforgettable Tour dates in Germany suffered the same fate in August. Shady.

Babasko has a few choice words about the ways concert organizers and DVD producers/distributors are behaving badly with German-speaking Bollywood fans. Read her thoughts here. Even if I hadn't met some of them and seen for myself how happy their SRK and filmi love makes them, I'd feel really bad for them. 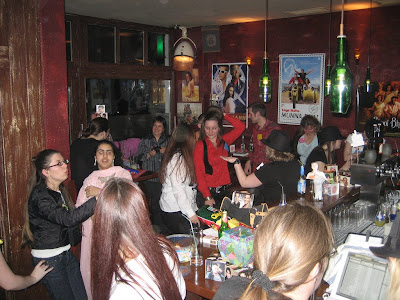 Here are a few of them in happier moments, at this year's German-language fan meetup in Munich. The girl in the red shirt and teeny black vest...does that outfit look familiar to you?

If so, it's because she and her friends came dressed in homage to SRK's then-upcoming song in Krazzy 4, complete with black fedoras. (Look at about 2:08 for a taste.) They love movies so much they came to an event in costume. Is alienating people like this really a smart business move? Based on what I understand about the relative scarcity of films that are dubbed into German (and German-speaking markets have always used dubbing, apparently, unlike the US, where foreign films are usually subtitled), it may not matter - that is, fans might still be willing to pay whatever it costs to access whatever movies and events they can. Taking people for whatever you can get - or, to be more polite about it, maximizing your profit from, and possibly adjusting for your advantage, the intersection of supply and demand - may be a legitimate business model in some situations, but in the economy of good will, it's a real stinker. It may be profitable financially, but it might prove to be thoughtless in the long run. If you piss off your consumer base, sooner or later, you're screwed. That's the question, I guess: will fans put up with this, or will they walk? It's probably more complicated than that, and there are lots of factors - such as, if all of us non-Hindi speakers did intensive language training to become suddenly fluent in Hindi, we could say a hearty "Auf Wiedersehen!" to the subtitle and dubbing questions! - and I don't envy having to weigh all the considerations whenever I buy a ticket or a DVD.

Update to post (November 3, 2008): On a related note, here's an article in Variety ("Berlin Lures Bollywood Industry," October 30, 2008) that discusses a German film organization's efforts to promote its services to Indian filmmakers. Clearly somebody thinks there is money to be made in the Bollywood/Germany mix.
Labels: house favorite: Shahrukh Khan

ajnabi said…
That sucks so bad. :-( Some of the posters at BollyWHAT said that people who wanted to bring their whole families have lost thousands of Euros. I agree with BollywoodFan, though, do the actors actually value the good will?

Rum said…
Thats is terrible! But at least SRK had the decency to say sorry to the fans,coz i bought the vancouver ticket to the Bachans tour, it got cancelled and I don't AB and AB2 said sorry to the fans!
October 16, 2008 3:30 PM

Beth Loves Bollywood said…
I really wonder who, precisely, should be held responsible for all this. If it's all legalities, then whoever didn't uphold the contract is at fault, and the big businesses are the ones we're angry at, not the stars themselves. But if it's the performers deciding they just don't feel like going to Vancouver or Dusseldorf or whatever, then they deserve some of the ire. I have no idea how much control over these things the stars have. Anyone else have thoughts on that?

I was talking with Antarra's Ramblings about this earlier today, and she was wondering if the German-language segment of the overseas Hindi film industry just isn't big enough for non-German companies and fans to worry about. If so, that would minimize even "the economy of good will," I guess - which is very sad.

theBollywoodFan - Good question! What do the stars actually think (not "what's their formal statement on a website")?

ajnabi - That's a LOT of money and time and resources spent, isn't it. I feel really sad for them.

Shweta - Yep. Won't it be interesting to see what the effects are!

Rum - The Bachchans never apologized? That's crappy. I have to admit, now that I think about it, I'd probably say SRK is more likely to apologize - he seems more personable and less distant. And I'm sorry for YOU that you didn't get to the show! Booooo!
October 16, 2008 3:40 PM

Banno said…
What a shame! But I think it's a lot to do with the organizers, and the tickets they sell, and then balancing their books, and finding out it's not worth it.

Pitu said…
Dude! Are people not getting refunded for their tix? Coz seriously, this is awful but not even getting refunded SUCKS! *shudder shudder* And to think, just this past weekend I was at Devon staring hungrily at the SRK Temptations poster - it was advertising the Barcelona show :-p
October 24, 2008 12:35 AM

Beth Loves Bollywood said…
Banno - Sigh. Stupid economies. Why can they not figure these things out ahead, I wonder? Or maybe it's all a big ploy to get people even more desperate and willing to pay even bigger sums for tickets to the next show? That is what Mogambo would do.

Anonymous said…
What is with folks and their false stories about the Bachchans? Amitabh did issue an apology through the media and his blog. All you need to do is use Google to find the articles.

And yes I agree that it sucks that these BW concerts are being cancelled. They need to find better promoters even non-Indian promoters if necessary.
November 10, 2008 8:11 PM