in which Akshaye gets to scowl at Johny Lever and Kareena in ways I've only dared dream of: the rest of 36 China Town

Warning: this post may very well veer from snarky into mean. I'm sorry. I could make excuses, but basically it's boiling down to me being really tired. But c'mon, if you've seen this, you know - there's a lot in here to make fun of, and I'm just gonna call it like I see it.

Also, I added some pictures to my first post on this movie.

I don't know what to make of this. I've wanted to see it for months and it's neither exactly what nor as good as I was expecting, but it certainly didn't stink. There wasn't as much emphasis on a real mystery as I thought there would be, and it also wasn't quite as slapstick/wackadoo as it might have been (it had far less frantic running around than, for example, Hungama, thank goodness). I guess that's what happens with masala sometimes: you get so much of so many things that no one flavor stands out? I don't know, like I said, it wasn't bad, but I'm not sure what it was.

Even Akshaye's performance was a little puzzling to me - he played the tough-ish cop with a wry-ish smile, but not in any memorable sort of way. Everything was -ish - even his wardrobe fluctuated between 20s suit-y and white-blazer-and-jeans Miami Vice-y. He didn't quite play it fully tongue-in-cheek, but he clearly wasn't entirely serious either. I kept hoping he'd channel Amitabh from Bunty aur Babli and give us something to really giggle at, but he didn't. Again, nothing stinky, but nothing great. Oh, but...

is it hot in here, or is it just him?

Overall, the mystery was not compelling, but that didn't really bother me and I happily took in whatever good bits came across the screen. I give the whole movie a B for timepass value and will try to note the really standout moments.

Let's talk clothing. Mostly I thought things were per usual in this film - it had its share of sequined-bikini-top-as-actual-top and colored suits, but nothing beyond the ordinary. Upen had some good suits (he'd better, for pete's sake), and when the movie veered into fedora-land, that looked pretty slick. As mentioned in my earlier post, I had some problems with the costumes in "Aa Aa Aashiqui Mein Teri," which is a damn catchy song. So let's take a look. First, we have this pointless character, here in a skin-tight jumpsuit with fried two-tone hair, 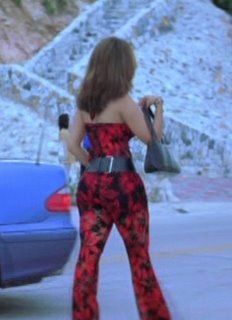 committing the very grand no-no of really short boots with a knee-length skirt. 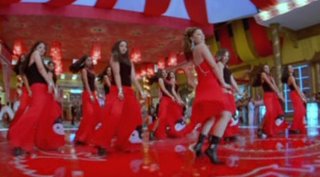 This is a bad, choppy thing to do to a person. I was raised to believe that the hem of a skirt should graze the top of the boot, and I stand by it. The line is all off and it somehow looks like she has on men's dress socks with her heels and has yanked the socks up. I will admit that I would have found something to dislike on this person no matter what, because she served no purpose at all - not interesting, not a good dancer, not eye candy, and no plot development/furtherment. All she does is help us realize that Rocky will make a pass at anything, but there's no particular need to hurry that idea along, adequately covered later as it is. She took up screen time that could have been Akshaye's! The nerve! Okay, and then the next bad fashion thing is 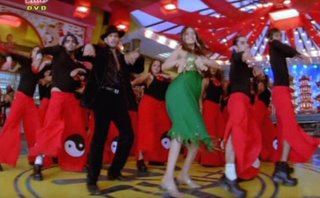 the black leotard/giant red pants ensemble. Check out the male dancer left of Upen for some tell-tale skin - and white socks with his black shoes! Baaad. And then wonder what in the world happened that the guy on the far right got to wear...fur-topped ankle boots? I don't know what's going on here at all, and I don't like it one little bit. Otherwise, though, this song is great. And as previously stated, "24 x 7" is a new favorite and I love everything about it. The other songs were enh.

Somehow through the course of this movie I have come to terms with Shahid Kapoor. Was it because he was less annoying than Johny and Tanaaz (sorry girl, probably not entirely your fault, but yikes - and if I get to be annoyed at Johny, then you are guilty too), or was he genuinely good? Obi Wan says he thinks Shahid generally tries too hard to be Shahrukh, and I can see what he means, because there's something very SRK-y to me about his eager shining eyes and floppy hair. I haven't liked him at all in the bits of other stuff I've seen him do, but here I genuinely enjoyed him. And he's a good dancer, right? I had to watch this pilot sequence over and over for the fancy hopping and spinning. 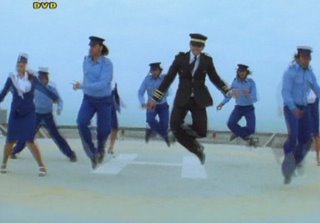 And Kareena too behaves herself nicely. I think it might be fun to be these two, getting to work together and just dancing their little ol' hearts out. More power to 'em. 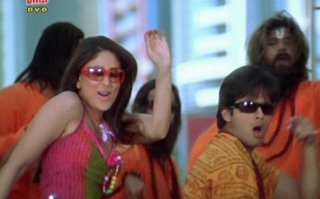 (Wow, how jet-lagged am I?)
Labels: house indulgence: Kareena Kapoor thoughts on movies

babasko said…
oh beth head over to nowrunning and look a t the pics of the Aap Ki Khatir music lauch. Your guy looks very very nice in his worn out jeans