I hate to badmouth a project starring my fake-pretend movie boyfriend, but honestly, what are they wearing? 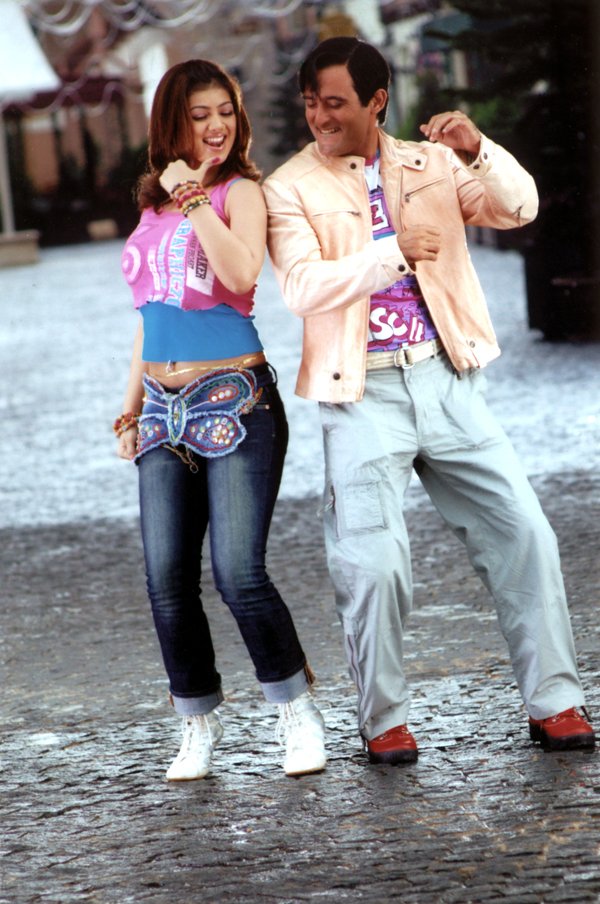 I can sort of forgive his ensemble (and not just because Akshaye's inside it). It's 80s-esque in a slightly gaudy way, but nothing out of the ordinary except for the shoes, which, if it were up to me, would be pink to better match the graffiti on his shirt (there might be red in there too, I can't quite see, but pink's a little more nutty, don't you think?). But hers. Also 80s-esque, but I think it misfired, and I blame the butterfly. Her top is just silly, but the ragged rising top layer begs a cause-and-effect with Midriff-Mothra here. Is the butterfly attached to the shirt with a little silver thread? Like it might actually fly away and it needs to be on a leash? And how does that work when you get dressed - is it separate and you clip one end of the leash to one part of your outfit and the other to the butterfly? At least she won't lose it when she teleports to Switzerland. Look at the original picture on IndiaFM and tell me what you think.

Once it's released, I trust someone will tell me if Shaadi Se Pehle is at least watchable. Subhash Ghai's no dummy. (I stood two feet away from him last year while he was mobbed by undergraduates wanting his photo. Have I mentioned? He was here for our film festival because Taal was shown.)

Aside to the whole planet: stop smearing bleach on random parts of jeans. It looks dumb.

Aside to publicity person: a still showing the hero doing the white-man's overbite is maybe not the best choice.

t-HYPE said…
WOW!!! I know actors don't usually pick out their own outfits but a girl has GOT to put her foot down at some point! That butterfly conncoction should be burned.

I don't know Beth. Judging by the stills, I don't think I could make it through the movie, I'd be so aggrivated by the visual imagery. Somebody DO something!
March 07, 2006 10:58 AM

Unknown said…
Beth, the fashion statement is borrowed from what is supposedly hot on Indian reality television shows - the likes of Indian Idol.

Accidental Fame Junkie said…
That's a hideous Bollywood designer gone wrong! I saw this pic some time last week I think. And my first thought was, "What was the butterfly doing there on Ayesha Takia?"
March 08, 2006 3:42 AM

Nick said…
Agreed on the jeans and the bleach. It looks SO TERRIBLE!!

Oh, and a random fact: Shaadi Se Pehle means "before my wedding" - it was one of the first Hindi phrases I learned because it is used so often in these movies!
March 08, 2006 6:26 AM

Beth Loves Bollywood said…
My heart is muchly warmed by the flood of disgust at these outfits. I won't even start in on his hair - whose badness has its very own, very funny thread on bollywhat - is, well, bad.
March 08, 2006 9:06 AM

It actually looks like, butterfly or no, the entire design of her costume was focused on being as unflattering as possible.

As for the gent -- someone needs to hire...Don!...to teach them how to dress and behave. Even I don't make the can't dance overbite, and I really can't dance.

All of a sudden, the baby blue Danksin with pastel pink cape and billowing cheerleader skirt combined with black dress socks ensemble from Disco Dancer doesn't look that bad.
March 08, 2006 10:28 AM

Anonymous said…
This comment has been removed by a blog administrator.
December 01, 2006 12:23 AM