[Chock full of spoilers, especially if you haven't seen The Godfather or Sarkar. I'm also assuming you have seen at least one of those films and therefore will do even less plot summary than usual.]

Ghost of Feroz-ji, I've got just one burning question about your 1975 take on The Godfather: why oh why, when this is Indian filmmaking in the mid-70s, did you choose to omit two of the three Corleone brothers? Why no bhai-bhai drama when it was already integrally incorporated into the story? Why not milk something that was totally convenient and, even better, sensible? Why a story of just one man avenging his father and fighting for patriotic service and sacrifice when you could have had at least two? Making this story primarily about an individual is not at all what I expected.

After reading some of the great comments on Memsaab's writeup of this film from last year, I think I may have the answer: Feroz doesn't tend to let a hero stand with him at the end of a story, and in this case maybe it would have just been too complicated to incorporate them long-lost- or estranged-ishtyle what with all the other important characters? Maybe it's because Feroz's story is more about patriotism and law-abiding for national well-being than it is about family or choices and inevitability? (Note for example the eventual disconnect from all the foreign trappings of Ranbir's earlier exile in Afghanistan [no sultry Sicily here!] and Ranbir's later direct reference to the utility of India's Maintenance of Internal Security Act as he argues with the drug-running villains.) Or maybe, despite them already existing in the original story, it just would have been too much work (or drama?) to bump off Fredo and Sonny along with all the other necessary bodies - Vito (Prem Nath as the god-man of the title), Tom Hagen (an excellent Iftekhar, who was surely born to play the 70s Indian Tom Hagen), Connie (Farida Jalal, whom it is delightful to see as something other than a sidelined Maa or psychotic teen), Apollonia (Hema Malini as Reshma), 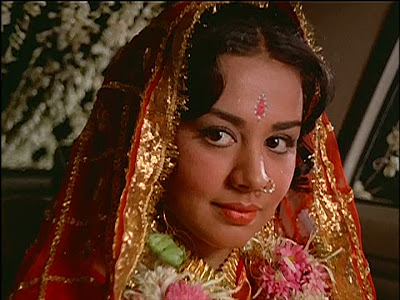 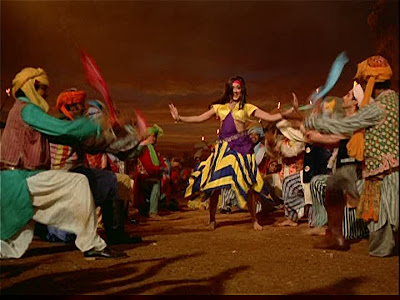 and all the actual baddies. It must be said that this story is pretty effective without them, but their absence gnawed at me. "This would be even better with brothers! Vinod as Sonny and Shashi as Fredo, maybe? Or a mostly mute Amitabh borrowed from Reshma aur Shera?" Even if the story in Feroz's hands isn't so much about family, the setting sure is, so why leave out two of the most gut-wrenching arcs? It's been over four years since I saw Sarkar, but I remember the brother (just one - RGV's version merged Sonny and Fredo) working well enough there.

The other major deviation from the structure of The Godfather I noticed comes in a nod to another masala-approved convention, the importance of distant childhood bonds: Michael (Feroz Khan as Dharmatma's only son Ranbir) and Kay (Rekha as Anu, who looks glamorous but has the oomph of a wet noodle) are reimagined as childhood friends. All I have to say to that is, if Jane Eyre and Rochester can be childhood friends, why not Kay and Michael? Shrug. Feroz works in mysterious ways. Michael/Ranbir also gets a rival for Apollonia/Reshma in the form of Danny Denzongpa (Jankura) - I mean, honestly, who wants a hero who has come by his love easily? Pish. More seriously, I think this is to show that Ranbir is willing to fight when necessary to acquire something he values.

Until at least halfway through this film, my dominant impression of it was not "Hey! It's The Godfather!" but "Hey! It's the movie in which Feroz puts lots of things in the immediate foreground, often to obscure what's really going on or to set up a big reveal of the true nature of the scene!" 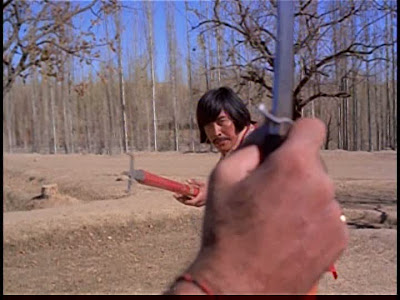 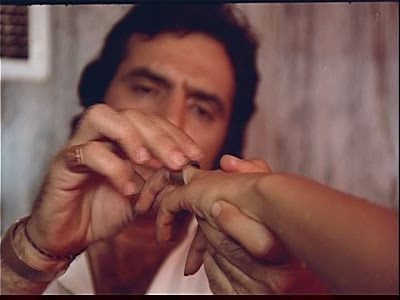 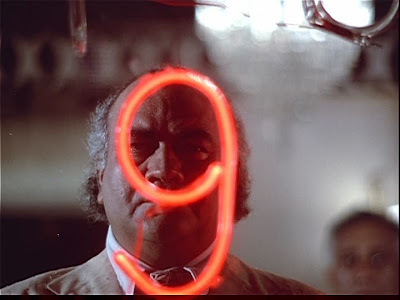 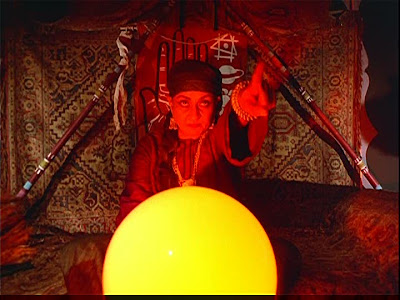 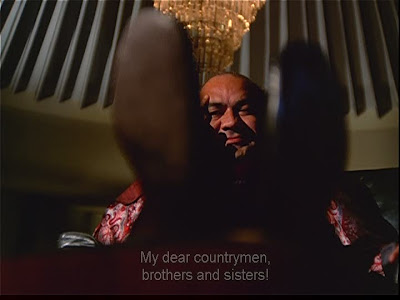 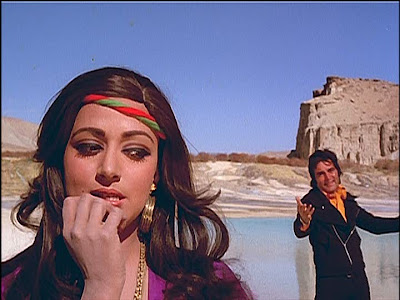 Like the missing brothers, this also weighed on my mind. The only explanation I've come up with is that placing interesting objects or people in the foreground sort of echoes Ranbir's fate and duty to avenge his father, which were right in front of him all along but took awhile for him to accept and undertake. 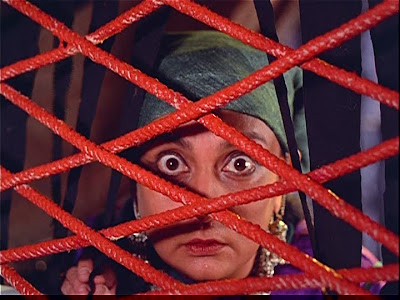 Similarly, maybe the identity of certain villains - or rather, the truly evil nature of some central characters - is prominent to us viewers but not to Ranbir. The culprits are right in front of you, boy! Or maybe Feroz-as-director was just in a hard-core "stuff in the foreground" phase. He also had fun with putting interesting things both close to and far from the camera, 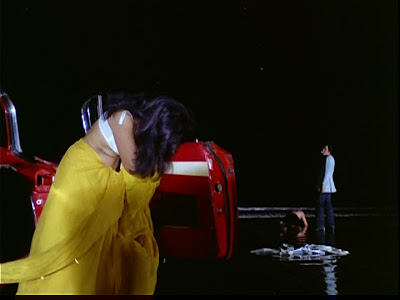 lovely use of geometry and striking landscapes, particularly in Afghanistan, 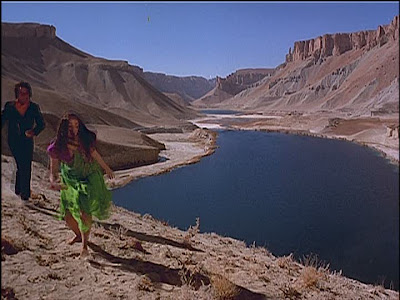 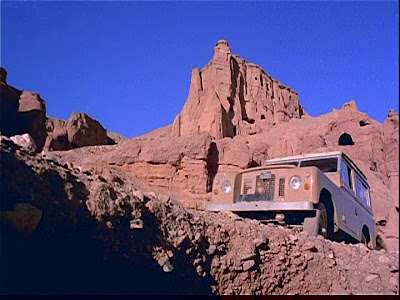 some unusual camera angles (especially looking up at things), 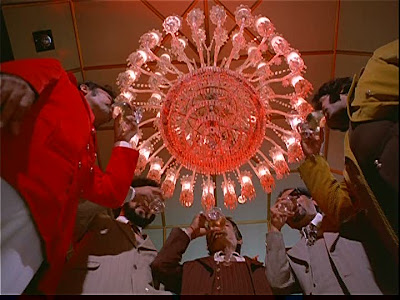 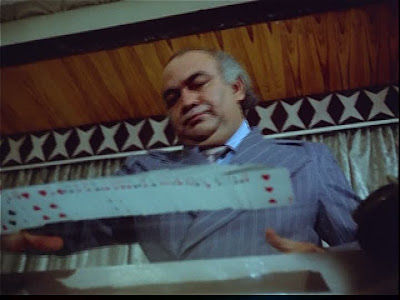 and even rotating the camera around its sight line to show mental turbulence. 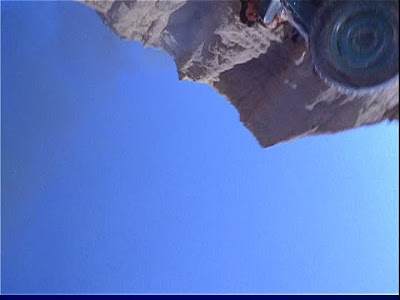 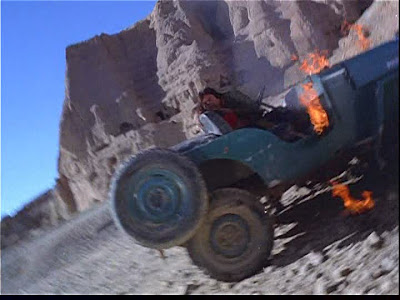 Whole kit-and-kaboodle-wise, I'm with Todd that this movie didn't really get rolling until Ranbir returns to India to track down the attackers of his father and wife. This being an FK International Presentation, though, there is plenty to occupy the viewer until the story gets cooking. As House in Rlyeh pointed out on Memsaab's comments, there's always something to look at. There's always something going on, even if I wasn't sure why or whether it was designed to do anything other than intrigue/entertain (which are perfectly fine ends, don't get me wrong). For example, we have the Rapey Cousins, played by Sudhir and Ranjeet at his most vile. In addition to being morally bankrupt, these two also provided relatively understated comic relief, playing Villain Dumb and Dumber and dressed as twins. Jeevan and Satyendra Kapoor as the senior baddies are styled similarly. 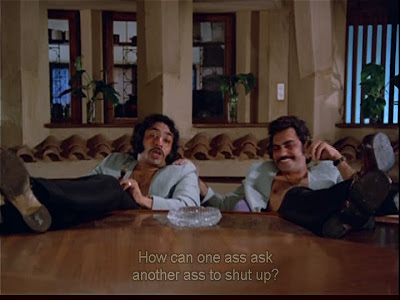 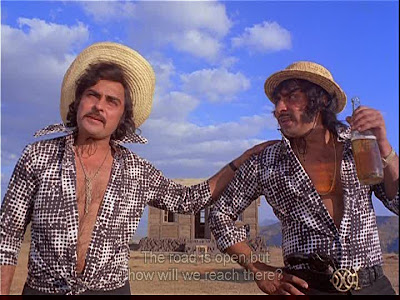 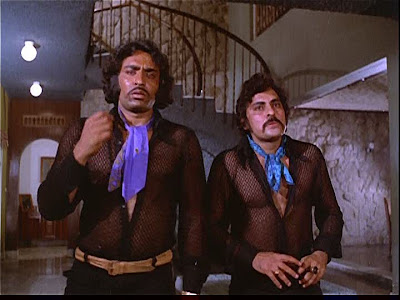 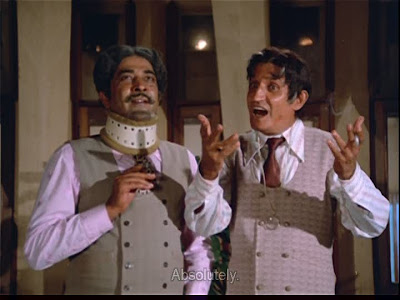 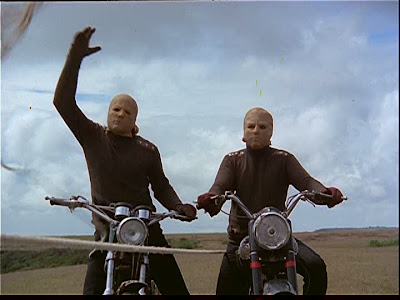 in an action sequence that includes Feroz leaping into the air to catch a live grenade, 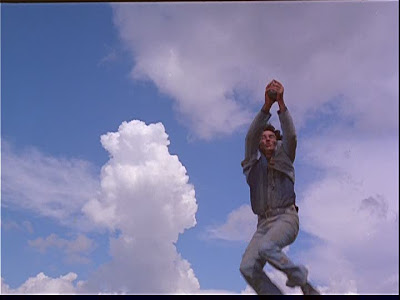 I have to admit I loved this, stupid as it is. See it here.
swell 70s fashions and a heaping helping of Feroz's chest hair, if you like that kind of thing, 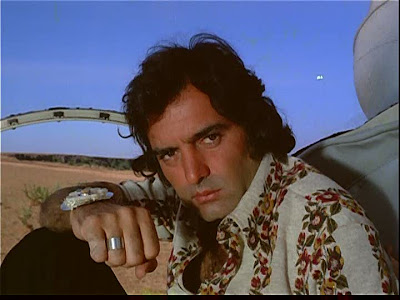 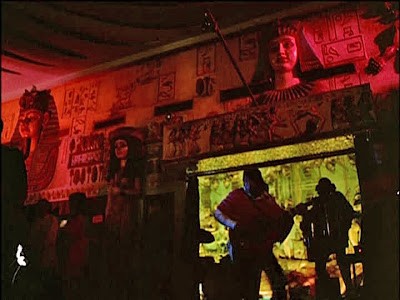 another lair with flair, 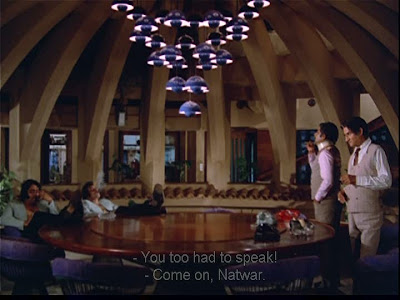 And yes, that's a lazy susan in the center of the table!
a nighttime cityscape that I know I have seen before (Apradh? Parvarish?), 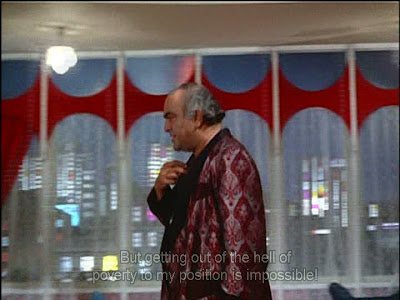 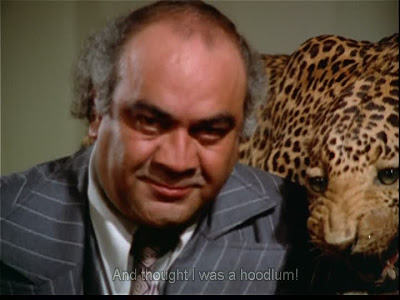 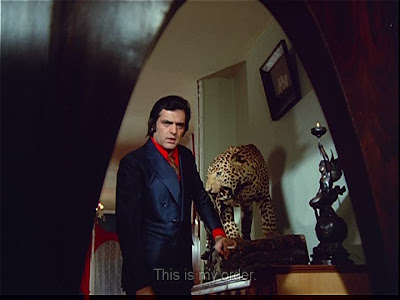 and maybe even a visual nod to my favorite scene in the original film, when the door to Michael's world closes on Kay. 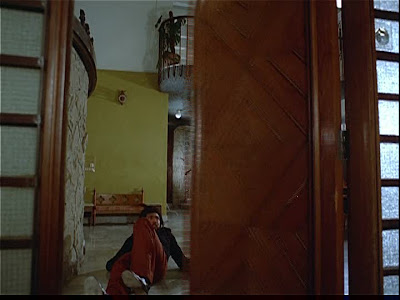 The door is used differently here - instead of locking Kay out, it's locking a principal villain into his eventual fate.

I cannot close without stating my concern about how women are portrayed in Dharmatma. This film has some harsh violence against women, including a rape scene that I would probably label the most disturbing I've seen in Hindi cinema. Thanks, writers. The same perpetrators try again with a different woman - in her workplace, no less - and there is also awful repeated domestic violence. And no, of course the wife won't leave the bastard despite the patriarch of her family encouraging her to do so. On the up side, Reshma claims her right to marry as she choses and not to merely be handed over to Jankura as a prize in a violent carcass-chasing horseback game among the Afghani tribals (and what's that about? noble savage? exoticization?). On the down side, the feisty, assertive, equal-with-men, but rustic Reshma is killed, leaving Ranbir with simpering but background-appropriate Anu, who is much more nursemaid than partner (whereas I've always thought Kay had the ability, though not the ethics, to be a real partner to Michael, like Rekha's character Supriya in Kalyug). As a further aside, I wished these two roles had been cast in reverse - I'm so fond of spitfire Rekha! Like Reshma aur Shera and Qurbani, Dharmatma is a man's world.
Labels: house favorite: Rekha superwow thoughts on movies

memsaab said…
I loved this film, but didn't much think about the Godfather at all while watching it (mostly b/c I don't really remember the Godfather). I really enjoyed it just as a film on its own. I think Premnath was superb in it...

Love Ranjeet and Sudhir in their matching outfits too. So much of fabulous.
January 03, 2010 8:13 PM

Rum said…
OMGG How i love this film!
I think I have a penchant for loving crazy cinematography like Manoj Kumar and Feroz's style of directing! I didn't consciously look for the Godfather references because I think i liked Feroz's way of focusing on his Indian version of Michael, coz as much as i loved tom hagen i was more into michael!
But those outfits that the villains wear are soo funny! I hooted with laughter at the end where Sudhir and Ranjeet were wearing tight-ass shirts and jeans with a hilarious hat!
There's sooo much to look at here, that i never tire of watching! Wish i could have the lottery numbers become lighted on the window opposite my house too!
January 03, 2010 11:43 PM

Banno said…
That city backdop was Manoj Kumar's favourite too. It's probably one of those studio assets, the more used, the more it recovers its money.

All I remember of 'Dharmatma' is Hema Malini, and how I hated her death.

Sam said…
One of the reasons I always thtough FK decided to let go of the two brothers was the "How much is too much?" conundrum.
He needed the extra time in Afghanistan and as you pointed out,to establish this as a poroper masala film, he had to fill it up with random things that entertain.
The two brothers would have made great masala, but as Aamir's Aatank hi Aatank and Govinda's Zulm ki Hukumat proved after this, they overpopulate the masala.
Why couldn't they get rid of the extranous bits and concentrate on the filial drama? That probably is the Feroz doesn't tend to let a hero stand with him in the end theory at work.

Brilliant post, as always. I love the dissection of his very interesting camera work.
January 04, 2010 12:32 AM

Anarchivist said…
I'm too distracted by daydreaming of an Egyptian-themed lair to comment further...
January 04, 2010 8:21 AM

Sharon said…
Urgh, Feroz Khan movies... I quite liked Qurbani, which I saw as a child, but then came Prem Aggan which was just awful, and I don't think I've seen one of his movies since. From what you've written re Dharmatma and Jaanbaaz, I'm thinking that was a good decision, y/n?
January 04, 2010 2:10 PM

Filmi Girl said…
The soundtrack to this has long been a favorite of mine but I haven't actually seen the film.

Perhaps that should change... your screencaps intrigue me and I am probably the only person reading this who has not seen The Godfather or Sarkar, so the plot will be 100% fresh!
January 06, 2010 3:17 PM

Anonymous said…
Excellent site, keep up the good work. I read a lot of blogs on a daily basis and for the most part, people lack substance but, I just wanted to make a quick comment to say I’m glad I found your blog. Thanks,
A definite great read…
anti keylogger
January 12, 2010 2:31 AM