Showing posts from June, 2007
Show all

Alternate title: by far the least of the movies starting with "D" released in fall 2006. My favorite part of this movie is from about 7:40 to 8:10 in, during the title song, when Hrithik is dancing under the rafters and in front of the round window. In my opinion, the best bits of this song, when he's by himself doing his rubber-limbed tap-dance-y moves, are almost as good as Lakshya 's "Main Aise Kyon Hoon" and I watched them over and over. After that, I think my favorite moment was Uday's Baywatch -esque reverie. And how sad is that? This could have been so much fun, and it just wasn't. (As with the first Dhoom , I'm willing to give it some points for "good to watch with a bunch of other people in the theater," which I didn't get to do.) What went wrong? For starters, four of the six main characters are stupid and annoying beyond a level I could forgive. We've got the opportunity for a cool girl baddie, but no, Sunehri ch
10 comments
Read more

Wait wait wait. So Abhishek isn't going to show up on my doorstep in the middle of the night in the pouring rain just to hold my hand?

- June 30, 2007
Scroll down just a smidge for a very funny list of things about which Bollywood gave this very funny writer unrealistic expectations. Hollywood romantic comedies were dangerous enough (John Cusack has never showed up either, and he even spends time in Illinois)...I can only imagine how growing up with movie rainstorms, trains, and dances could make real life even more disappointing.* * I'm sort of kidding and sort of not. I do think you need to have your grown-up wits about you in order to shuffle some of these filmi things back into the way your own world actually works. Tempting as mysterious strangers or evening monsoon walks or pouring your heart out as the train pulls slowly out of the station might be, such things don't usually pan out as well or as simply as in the movies. But it's equally important to not be so jaded that you never even engage with strangers or walks or trains. If push comes to shove, I'd recommend open-hearted. (Unless he's been stalking
1 comment
Read more

Now that's what I call Shashilicious!

- June 27, 2007
"It Takes All Kinds to Make 70s Bollywood Leading Men" By Nina Patel on EGO Magazine. Yes, yes, a zillion times yes. She nailed it. That is exactly what I'm looking for in a FPMBF. Official regime change may soon be underway.... Aside: I've only seen Feroz Khan in recent pictures. He's got quite the pretty/pouty/threatening thing going on there. And great hair.
2 comments
Read more

- June 24, 2007
Desicritics has a serial feature on beloved older (pre-1990) films called "Take Two." Part two is now up (and also includes a link to part one). My contributions so far are Parvarish and Sharmeelee , which I have already written about here, but the "Take Two" articles are much shorter and tighter (like Shashi's hair and Vinod's pants, respectively) and have a different focus (more "why I love this" than "I watched this and here's what I thought"), so they're not complete recycles, if you're tempted to hop over and read them. Other authors include BLB-linkees Aspi and Sakshi, so you definitely should hop over and read them. Good times!
1 comment
Read more - June 21, 2007
...and if you're nice, I'll let you watch them for free. Okay, you can watch at least five of them for free anyway. Follow this link to Jaman.com and sign up, at which point you'll get the standard three free rentals for all new account plus a bonus five. (If you already have an account, you'll still get five more free rentals just for participating in this special promotion of Indian films.) If you're new to NFDC films, like I am, here are the NFDC website and some information about Jaman's collection of NFDC movies . And because I don't know diddly about this arm of Indian cinema other than Ray, let me just copy and paste from the press release so that you get the right information: Jaman and India’s National Film Development Corporation (NFDC) Sign Partnership to Premiere 30 Films Online Definitive works of Indian Cinema from Notable Directors including Satyajit Ray, Shyam Benegal and Mrinal Sen to premiere on Jaman.com San Mateo, Californ
7 comments
Read more

Everybody loves a third wheel! 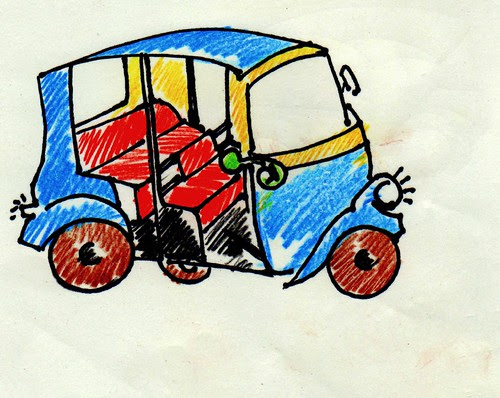 You all know Akshay Mahajan. "Darling Akshay," as he is known 'round these parts. Trivial Matters . He takes lovely photos and is turning into quite the photojournalist. Anyway, he and two friends are participating in a charity event in which they drive a rickshaw from Kolkata to Manali and the team - Teesra Paiiya - needs your help. Go here to read about their plans (you can even listen to an interview Akshay did with Kamla Bhatt) and if you can dig up a few coins from between the sofa cushions I'm sure they'd appreciate it. And it's a totally sound investment. They've had driving lessons and everything.
Post a Comment
Read more

All of these are courtesy of the wonderful Jo, Bollywood fan extraordinaire and owner of Ganesha .
Post a Comment
Read more

- June 16, 2007
Poor Akshaye. It's bad enough that a major chunk of a thread in the BollyWHAT forums is devoted to his unfortunate hair situations ; now the Times of India is discussing his procedures . Sigh. We can't all have Shashilicious curls, can we?
4 comments
Read more I just got back from seeing Waitress and could not stop thinking how much looks like .
9 comments
Read more

Now with twice the amnesia! Do Anjaane Despite the flippant post title here, I really did find this movie very engaging and interesting. My thoughts are over at Desicritics. Does anyone know who this guy is? He looks so familiar. Also, Amitabh stays in the Oberoi Grand in Kolkata, which is where I got to meet Arshad Warsi . Here's a photo of Rekha running out of the door, and while I don't think this is the exact entrance we stood in while he was kind enough to chat with me for a few minutes, I was still pretty geeked to see the hotel in a movie.
8 comments
Read more

- June 05, 2007
I've been meaning to make this for ages. For all the advice you never knew you needed... the Bollywood Magic 8-Ball ! Suggestions for filmi-based texts for the ball are very welcome.
5 comments
Read more

Just because it's repellent in real life doesn't mean it isn't a dang fine song.

- June 05, 2007
I've been listening to "Ganpat" from Shootout at Lokhandwala pretty much nonstop for a week. From what I read in the reviews of the soundtrack, the lyrics are borderline vulgar, but I don't care. I love the lazing saunter of the instrumentation, the rattling percussion, and the devil-may-care, swaggering vocals. I haven't seen the movie, so I don't know how the song fits in, but it sounds like a bunch of drunk guys sitting around hooting and bragging. For the folks who have seen it, does baby-face Oberoi pull off a thug? His white-man's overbite in the video is none too impressive.
8 comments
Read more
More posts