HELLO FRIENDS! It's been aaaaaaaages—not just since I wrote anything here* but also since I was so excited for a film in the cinema and it actually played in my town and it did not disappoint!

Perhaps this is because Shamshera is very 70s masala in a lot of the right ways for me: 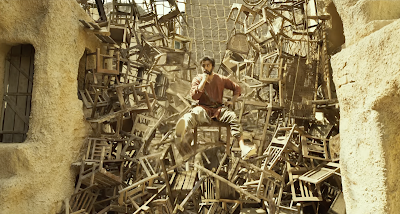 It's an old-school daku-drama. It's not cartoon-y, but it also wants you to be entertained with visuals and details that are fun to watch: the flocks of crows, the sandstorm, a sacred tree in the forest. The violence has some viscera to it. I particularly like a laathi bout with the the British army man sent to capture Shamshera; Colonel Freddy is allowed to be a human while Shamshera remains the bigger man. This film is more than just anti-colonizer. I have zero problem with "just anti-colonizer" stories—I was raised on the myth of routing redcoats too, after all—but especially on the heels of RRR, it's interesting to see something where the Brits aren't the point. This a slightly more complicated world that shows multiple kinds of evil and does not let any of them off the hook.

I'm staying away from reviews until I post this, but from the general Twitter miasma I gather I might be in the minority in being fond of this film? I was ready to like it, I wanted to like it, and I do like it. (I'm also ready to like the new Persuasion because most of the haters are being so irritating.) Maybe this is just my coping mechanism for living in America in late July 2022, when everything feels so important and exhausting all the time. Maybe I'm just a pushover for this flavor of righteousness. But WHATEVER—if we've learned anything from the pandemic, it's that we have to make our own fun and grab joy wherever we can.

Is this film perfect? Oh goodness no. It has plenty of convenient coincidences, logic holes, hurdles too easily overcome, and relationships that appear fully formed without being developed or earned. For no reason, it has no use for women. Do not try to "there weren't women bandits in the 1870s or 1890s" me about this unless you can prove there were bodyguarding crows around; anyway, reality is clearly not of interest or relevance to this film. The film fails the Bechdel and Mako Mori tests spectacularly. Vaani Kapoor's Sona is more than a sexy lamp (although she does dance with a sexy lamp), and Iravati Harshe makes the most of what she's given as a wonderfully long-suffering partner and mother, but the film spends scant time or energy with either of them. The two interact for maybe one second, and they give it emotional impact, but the film just doesn't care.

But—or "and," or whatever conjunction you like—I find many moments of pure delight in Shamshera. In one tense sequence, the band of heroes infiltrates a dangerous area using logistics I've never seen before, and my jaw dropped. (I'm referring to how they arrive at Shuddh Singh's wedding—no spoilers.) There's an eerie disembodied child-like voice that squeaks and shrieks as Sanjay Dutt gears up for evil-doing; I have no idea who it's supposed to be or why (and the subtitles didn't translate it), but I love it. There are wonderful animals all over the place, most notably a huge flock of ominous yet helpful crows, but also fireflies, bees, an eagle, and horses. (I forgot to note it, but isn't there a line of dialogue about...creatures who live on the earth will never soar, or something like that? Based on it, I expected to see lots of flying animals, and the film delivers.) When "Kaale Naina" opens with a spinning top somehow lit from within, throwing sparkles all over the stage, I gasped. In the year of our Helen two thousand and twenty-two, someone came up with a way to do something new with "hero's love interest is sexy for the leering villain"! Take a moment to appreciate that. 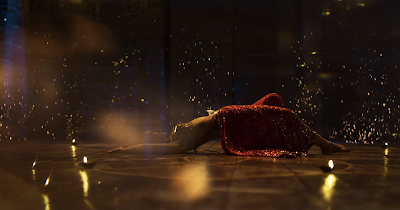 And then later she has a costume change that is actually part of the song, like a Drag Race reveal! I can't remember ever seeing a song sequence treat a costume change as a thing that has mechanics in its own world! They just happen and nobody comments, but here the audience within the film itself is impressed! Speaking of costuming, in the first scene between Sona and Balli (Ranbir's younger role), they replace her kept-woman ornaments with accessories he has pieced together from trinkets and junk he and the ragamuffins from "Ji Huzoor" have pickpocketed. It doesn't make particular sense, since they're trying to hide from authorities but all of her accessories jingle and clank, but it works for the characters and I am charmed. When Balli meets his chacha Doodh Singh (Saurabh Shukla as a compatriot with just a touch of comedy uncle), he's draped in bells he stole from a temple, clanging along through the desert. Again, there's no necessity for this, but it's an unexpected detail that tells us a little more about the character it and it makes me smile. All of these small things feel huge.

Because Ranbir Kapoor is in 95% of the runtime of this film, I also want to talk about how Shamshera strikes me as a star text, for him as well as for...let's call it the Kapoor industrial complex. So firmly is his man-child type of role ensconced in my head that I was genuinely surprised when I was reminded that he's turning 40 this year. The film is smart in opening with the flashback (when he plays the older generation of Shamshera), establishing him as 1) a serious, weary grownup and leader type of person 2) who somehow has a physical presence that matches Sanjay Dutt's and 3) who is willing to suffer great physical pain to save his Khameran community...and fails! This is a marked departure from what we expect Ranbir to be like, even if we do expect it in this type of film, and an appropriate and interesting re-entry after a 4-year gap from films.

It's also something different for the Kapoors, and given how many, many films they've made over almost a century, that's really quite remarkable. Think about it: this film's basic template is decades old, but could you put any of his ancestors in this role? No. Despite the truly magical flashes of Shammi and Rishi in "Ji Huzoor" (which I am thrilled to have seen on the big screen, since I've never gotten to see the elders at cinema scale), the Shamshera of either generation is what Vinod Khanna or maybe Dharmendra would do. As the film played, I kept thinking about how no other member of his family has done a film like this or even could. I don't know my early Hindi cinema history well enough to know if there were daku films in the 1930s and 40s and thus whether Prithviraj could have had a shot at a film like this, because he's the only remotely likely candidate. I flicked through a mental list of the others and dismissed them one by one: Raj is too pouty, Shammi too manic, Shashi too urbane (he did play a daku at least once, but it's not particularly convincing), Rishi too modern, Randhir too inconsequential. Obviously Kareena could play a daku if she wanted to, but even if audiences could handle a woman bandit, she probably wouldn't choose to do it at this point. (If you want to join me in trying to manifest this, send an email. I also eagerly await Kareena as hardened, scheming brothel madame.) The Kapoors as a cultural force may not matter now as much as they used to, but for those of us who like to think about how cinema got to where it is, Shamshera is a fascinating study, finally giving us a Kapoor in this classic hero type. I have no hopes for Bhramastra being remotely as interesting. It just looks bloated and juvenile, though I 1) will definitely see it and 2) hope to be wrong.

For all the complaints that Shamshera is old-fashioned...well yes, it is, gloriously so, beautifully executing a known formula with a weariness and bitterness that are perfectly suited to right now. As I watched, I kept thinking "freedom's just another word for nothing left to lose," and as much as that's the attitude Shamshera the individual takes, it's really true for the battered Khameran community he belongs to. This film actually shows an election at a key moment; as much as Shamshera is the leader, he's not a tyrant, and we see his community raise their hands to vote in favor of his suggestion. One of the film's best moments is when the Khameran, still enslaved, realize they finally have an opportunity and literally bang down the door to their freedom. In reality, we should never assume that those with the fewest resources are responsible for their own condition. But cinematically, masala-ly, it's a powerful surge of what is right and necessary. Shamshera posits that the real enemy is within—the invaders are utterly irrelevant at the end. As the world's largest democracies descend into fascism, how is that not a modern message?

* If you miss me, in addition to Twitter, I write an essay every other month at The Cultural Gutter, almost always about Indian film in some way or other.

** The subtitles talked about caste a lot in the flashback portion and then dropped that idea. I am  completely unqualified to talk about caste and I look forward to learning more about reactions to this aspect of the film.

Anuradha Warrier said…
Beth, I'm so glad I stumbled upon this (and that you penned your thoughts down after so long!). I watched Shamshera while ironing, and I thought it was a flashback to the 70s-type masala. Ranbir is not someone whom I would expect to fit into this world, but like you, I was more charmed by the world-weary Shamshera than I was by the manic Balli.

My problem with the heroine is basically Aditya Chopra. He treats his women shamefully. Vani has nothing to do but dress anachronistically and be objectified. She's a good actor and I wish she had been given something to do.