Sometimes Netflix adds a film and you think "Okay sure, why not," especially when you have domestic travel with no in-flight entertainment coming up. And even more especially when it contains favorite Vinod Khanna, even in from a non-favorite era (1988). What was it like at the time to see his return to films? Did news of the Rajneeshee horrors in Oregon reach India at the time? (My parents, who were about 40 when that happened and read the newspaper and listened to NPR every day, had no memory of it at all.) Did the Hindi film industry seem sane in comparison?

Aakhri Adaalat opens with bad guys getting away with doing bad things. The specifics don't really matter, although you will not find your efforts wasted if you happen to remember them. They're part of a ruthless, multi-interest gang led by Gulshan Grover and Paresh Rawal, who are operating in peak 80s slimeball mode. 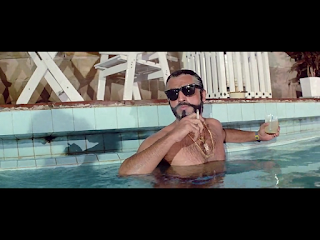 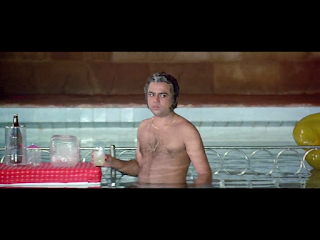 Inspector Amar (Vinod), who is much more entertaining than his 70s namesake though just as morally upright, is on their tail, sometimes literally, as in this sequence in which he hooks the end of their getaway vehicle with a black umbrella. (WWByomkeshDo?) 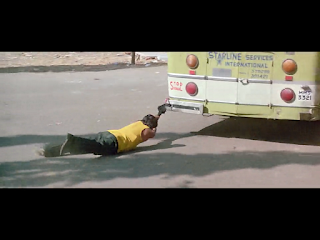 But he doesn't quite have the proof for a court to convict them, so they walk away free and he sulks to lawyer pal Vinod Mehra and his mother (Sushma Seth) about the weakness of the law in dealing with India's domestic enemies. The person who can take care of the baddies is an unnamed motorcycle-riding gun-wielding figure in black leather, who tracks them down and executes them. 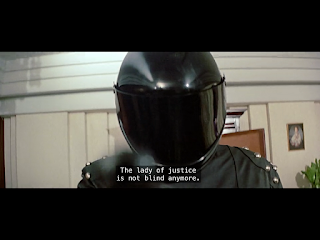 Vinod is also aided by the bumbling Sub-Inspector Dimple Kapadia. She somehow out-comic-reliefs fellow cop Jonny Lever, but since she is Dimple Kapadia, you know she is not long for this kind of shenanigan, and it's a good thing, because she's not good at it. At all. 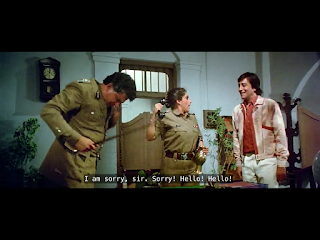 Vinod and Dimple continue to try to find both the gang and the mystery assassin. They infiltrate the boss's nightclub (by which I actually mean they just show up at the boss's nightclub, where apparently no one minds their presence?), probably so that we can have an item song featuring Huma Khan and a bunch of unfortunate fellows in gold vests and Vinod can threaten to drown someone in a toilet. 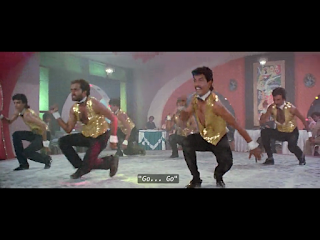 The assassin shows up again, and in the chase Dimple is injured and falls into a pool, and Vinod realizes he loves her, and yadda yadda. Later, while hanging out with his mom at their house, as you do, Dimple finds the assassin's outfit in Vinod's closet, and she sticks to her duty and turns him in. He is fired and moans to his journalist friend Jackie Shroff, a jovial fellow who keeps him company peg for peg in the bar in the delightful song "Jaisa Tu Karega" while werqing some OG skinny jeans with slouchy boots. 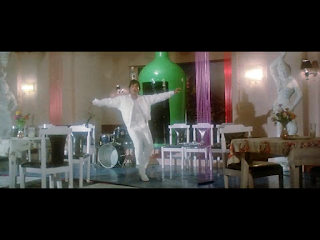 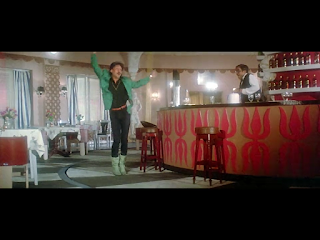 Ok, so THEN Gulshan Grover hunts Vinod and Jackie down on the street when they're having a great time with their chaddi-buddy song (except they aren't actually chaddi-buddies, a point that becomes important later). The assassin reappears and kills Gulshan and clips Vinod, thus clearing our hero's name. Jackie is injured too, and he recovers with the help of Sonam. This romance track doesn't add much, but I like Sonam's character because she knows what she wants and goes after it while wearing bedazzled acid washed denim. 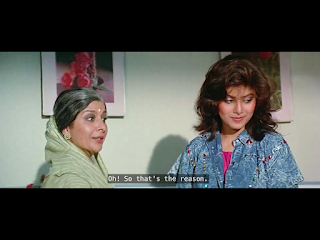 In their one previous interaction in the film, Jackie wanted none of her attentions, but his brush with death seems to have melted his heart, making me wonder if a scene or two got cut.

Back at the lair, Paresh Rawal sees a vacancy in the organizational hierarchy and nabs it. He copies  the assassin's disguise and mows down innocent members of the public to sully the former do-gooder's reputation and draw the police after them. Frankly, this is quite a good idea and shows media savvy; masala villains don't usually make so much sense. The "assassin" also uses the occasion of Dimple and Vinod's engagement to kill members of their families, including A. K. Hangal just as he was about to tell us some important backstory. 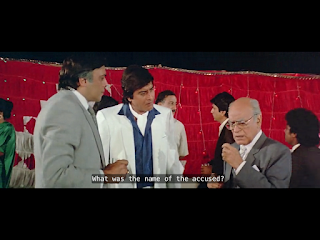 Finally all the good people gather their wits and work together to get everything figured out and tidied up. This involves a bit more courtroom blather than I personally care for, but it gets the job done and a bunch of side characters get to say meaningful things.

There are many things about Aakhri Adaalat that I really like. 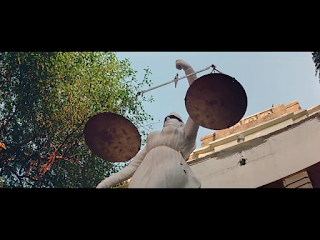 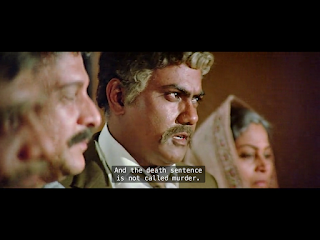 Aakhri Adaalat is far better than the "I'd watch it on a plane" rationale that led me to it in the first place. Everyone involved really knows what they're doing, and they're very entertaining while also providing some unusual (at least in my viewing history) social commentary. Do watch!
Labels: house favorite: Khanna khandan (Vinod; Akshaye; Rahul) thoughts on movies