Things the hero of Badrinath Ki Dulhania does that are beyond even Bollywood's typical sense of "stalking=love" (recording her image without her knowledge or consent and following her to school on the bus hardly registering in this heap of ick): 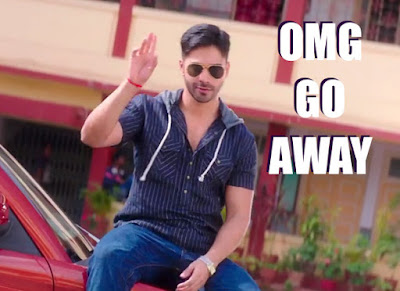 Things Badrinath Ki Dulhania does that are in other ways problematic:
[SPOILERS]
To borrow the imagery from the film's final big scene, to me the weight of the film's script feels still on the WTF side of the scale between "show bad things" and "address them." When Vaidehi—whom, as Anna Veticad points out, the movie has established as ethically flawed herself, thus providing a handy opening for the audience to figure she deserves Badri's abuse, and who is not given the space she deserves, argues Ila Ananya in Ladies Finger—decides to marry Badri despite allllllllll of this, my heart broke. On what planet is it acceptable to show a woman not only returning but committing to a man with an established pattern of physical violence? I had to clamp my hand over my mouth to stop from screaming at the screen. What happened to the girl who wound up doing so much emotional caretaking for a doofus she once dismissed with the best-ever line "I'm done trying to reform India"? And why are the conservative, über-manipulative fathers, one of them a downright villain, allowed to get exactly what they want in a film that tries here and there to be progressive?
[/SPOILERS] 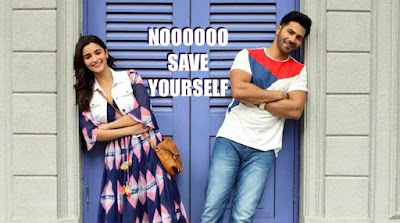 There is a "however" coming. Unfortunately, at least for me, the leads are so good and their chemistry so enjoyable that it's very easy to forget at least a few of these sins because Alia and Varun are just so charming, her especially, with that amazingly expressive face and voice and an ability to express nimbleness underlaid by so much resolve. I went into this film with considerable good will because I like Humpty Sharma so much, as well as the leads individually. I even felt bad for Badri—he's got a terrible father, a useless mother, and a checked-out older brother, and he's just a tough who rides a motorcycle in love with a trained professional who will traverse the skies—at least until I realized that the script is setting up easy excuses for his aggressive, violent, and short-sighted behavior.

I do appreciate that Badri articulates one really important insight gained from his own finally quiet observations: he's so impressed with Vaidehi's professional commitment and competencies (that too in a field he could never comprehend) and realizes the extent to which his sister-in-law is similarly impressive and should get to shine and contribute. (Befikre's hypocritical slut-shaming hero had a similarly satisfying arc of learning and apologizing among the trainwreck of that script.) What I like about this is that the hero actually applies the concept of his romantic interest being awesome to a woman who isn't "his." Yes, she's part of his family, but her skills and success don't really reflect on or benefit him directly. And both Badri and Vaidehi both suffer in families scarred and scared by past disappointments (a scenario handled a lot more compellingly in Humpty Sharma) and grow as humans once they're out of their hometowns, even if only one of them made that voyage with that purpose.

Overall this feels like a gender-equality exploitation film, indulging with shallowness and glee in violations against its purported goals. It feels so 90s to me, as though modern times have been shoehorned into a violent, macho world. "It's 2017, dad!" Badri reminds his patriarchal nightmare father at the end of the film, and it feels more like a slap on the wrist than progress because the film concludes so soon after that there's no room for any depiction of thoughtful change. Dad is the type who only conceives of women as humans when one is born into his family...which I guess is better than nothing but is still facile and shallow. The film's attempts to address other social ills are similarly half-assed, not given enough space to develop or feel like genuine change but present enough to be ticked off a checklist.
Labels: house favorite: Alia Bhatt thoughts on movies

The Bollywood Life said…
I think there are movie with similar story but Badrinath Ki Dulhania is most amazing.

Msharma said…
But this movie just shows what we have been seeing in movies since the 70s when hero s began stalking the heroine with violence. Gone are the days of yore when gentle wooing was the norm and the hero was heartbroken when he saw his love just smile at another man. There was a stepping away from the girl if she showed a little bit of interest in another man. Now we have physical assault and sometimes even sexual assault as a way of wooing the girl. No wonder crimes against women including acid attacks have gone up by a 1000%.
September 29, 2017 6:25 PM