Ki & Ka
If you forget about the Amitabh and Jaya Bachchan part—which you immediately should, because it is bloated and self-congratulatory—this is not a bad little exploration of gender- and relationship-based expectations. The story is more often from his perspective or from within sympathies towards him, I think, but no women are particularly demonized (though the bit about Kia's jealousy over Kabir's housework-based fame could be handled better, IMO), and in fact Kia's career ambitions are supported by other women and rewarded in terms that she likes, which feels HUGE for a mainstream film. It's still vaguely maddening that socio-economically privileged men are fawned over for doing basic household work and for being friends with stay-at-home wives/moms, but it also seems quite likely that that's what would happen if these characters were real people. I like that these characters are the way they are because they've thought about issues and their own personalities and likes, not solely because of trauma or rebellion. I also like that the film is clear that self-knowledge and self-confidence are not always enough to sustain you through social critique when you're in a non-traditional relationship or scenario. We all want to think that what other people say doesn't matter, but that's very hard to adhere to all the time.

Arjun Kapoor, though. He's so dull.

Phobia (did not finish watching)
This is perhaps not a movie for viewing on a plane: the screen is too small for the visuals to be appreciated or for the fear to grip sufficiently, and the cuts (at least on Etihad Airlines) probably left out some of the drama and scares. I am not a horror, or even scary, movie fan, so I'm not sure why I even tried this, but I was soon bored. The film throws a lot at you, but nothing stuck for me. Perhaps in another setting, Radhika Apte's impressive performance—which based on what I saw is as much a solo turn as Shahrukh's in Fan—would have been enough to engage me through the whole film, but it wasn't while I was jet-lagged and over-eager for the plane to land.

Side note: Radhika Apte is suddenly everywhere I turn—an absolutely fine place for her to be, I hasten to add. It's like when you learn a new word and suddenly notice it in everything you read even though you'd swear you'd never seen it before. In the last few months, I've seen her in Kabali, last year's tv adaptation of Chokher Bali (which I like far more than the Aishwarya-Prosenjit version), Anurag Kashyap's short That Day after Everyday (2013), and Parched (see below).

M. S. Dhoni
I knew this movie would be out while I was in India but I had no plans to see it because 3-HOUR CRICKET MOVIE WITHOUT SUBTITLES.

This is what cricket scoring and strategy sound like to me.
But I actually love it. Does it help that, thanks to a friend of a friend, I got to see it at a special screening hosted by Sushant Singh Rajput and meet him and tell him how brilliant I think Detective Byomkesh Bakshy! is? Obviously.

Some people told me that knowing nothing of cricket or Dhoni might be the ideal frame of mind for this film because I would have very little sense of how hagiographical it is, of what is conveniently omitted—what was still untold, despite the film's tag line. That's mostly true; even in my ignorance I'm pretty sure the film isn't showing us much of the hard mental work of captain-ing, of strategizing and making decisions in very high-stakes situations. I also agree with the general murmuring that there is no compelling reason to make this film in 2016, when the subject is not only still alive but currently active in the line of work that made him famous.

That said, I delight in biographies that show that greatness is also found in people who are decent human beings with no demons, no quest for redemption, and nothing in particular to prove other than that they are good at X endeavor. I love to see a genius who is otherwise ordinary. I don't know if Dhoni is as sane or nice a guy in real life as he is in the film,* but it's pleasing to get the unspoken message that you will benefit in life by working hard and being good to your friends and those who help you. I get that "decent people who try hard" doesn't always make an exciting narrative, especially without a villain, as this film is, but I'm glad someone tried. To me, and with the background I have (and don't have), SSR made an actual character rather than any caricature, not just with his face** and voice but with his whole body, and it's a character I find easy to care about and root for.

* I am aware Dhoni is a friend and partner of one of the producers.

Parched
This film is WAY better than I thought it would be. I had expected a horrible slog through important social issues leading to either absolute nihilism or misandry, but instead Parched is complicated and filmi enough to feel more like a story than a lecture. The visuals are beautiful—often used in what I assume is deliberate contrast to the very ugly attitudes—the acting is flawless, and the characters are complex. Best of all, the film makes clear the importance of women helping themselves and each other and breaking or redefining the traditions that harm them.

The men in this world cannot be relied on for any good, and some of them are not even predictable in their horribleness, their abuse taking new shapes as women claim power and argue back. The women's artistry (handicrafts, dance), seen both in the set design and as plot points, echoes each individual's powers as creators and deciders. There's a lot of interesting stuff going on here with definitions and use of space as well; sometimes the public space (a bus, a roadway, a historic site) is the most liberating (and liberated), but at other times the private is (a cave at night, an empty house). What seem to be the most dangerous spaces are the village or multi-family interactions where people know you enough to judge you and have power over you but aren't close enough to actually love or know you: marriage negotiations, the panchayat meeting, your courtyard.

For those of you who have seen it, did you love how Shahrukh Khan is invoked? I want to write an essay on how he gets used as a symbol in films that he is not otherwise a part of; this one is the most interesting example that I can think of, tied to not only sexuality and desire (as opposed to just material aspiration) but also new technology and freedom. He's the only star who could have worked this way, both modern but irreproachably mature and masculine.

Dishoom
Dishoom is a dumb movie, but that's exactly what I was in the mood for when I watched it, so I ended up liking it quite a bit.
Varun Dhawan is well cast as the junior and comedic partner in a buddy cop project; John Abraham...everyone in this film has more charisma and screen presence than he does, and I include both the dog and Nargis Fakhri in that assessment. 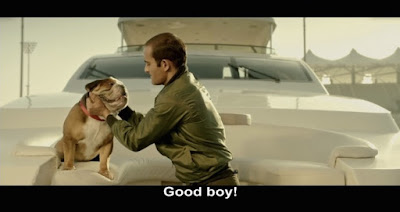 What Dishoom does best is keep the plot moving along fairly quickly so that you are soon distracted from one dumb thing by another (and fortunately most of them are good-natured, with at least one glaring exception about to be named): Akshay Kumar doing his best with an ignorant gay stereotype cameo! 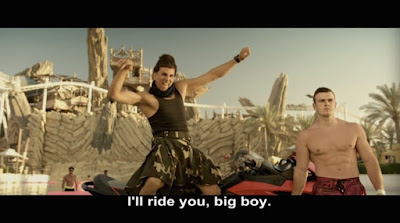 random patriotism from the kidnapped cricketer! Jacqueline Fernandez's thighs! Parineeti Chopra's waist! Rahul Dev's piercing gaze! vehicle chases inside some giant mall or something! John smoking again because he's such a badass! the writers actually acknowledging that someone could be recognized by his voice! motorcycles with side cars! land mines!

And then this happens and the world stops and I am so happy. 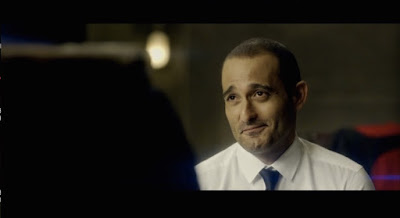 I would watch anything to see that crooked smile again. I don't know where Akshaye Khanna has been for the last few years, but THANK HELEN ABOVE HE IS BACK and apparently with his talent in place. If you have missed Akshaye Khanna like I have, this movie is definitely worth watching (but you can skip the first 45 minutes or so). That's the only real reason I can give you to watch this.
Labels: house favorite: Khanna khandan (Vinod; Akshaye; Rahul) house favorite: Shahrukh Khan house indulgence: Kareena Kapoor thoughts on movies

Aparna said…
You are my soul sister - I echo every single comment:
- Arjun Kapoor: I do NOT want to watch any movie that has him...so dull.
- SSR: drool
- John Abraham in Dishoom: if only he was not there.
- Radhika Apte: She does seem to be in everything, esp given that I have time to watch only shorts nowadays I watched her in Ahalya and Kriti recently.

BUT but but, Akshay Kumar in Dishoom was probably my fav part of it when I sat up (I was watching it at home after putting our daughter to bed, so was clearly exhausted).
I wish Akshaye Khanna was given a little more to do.

AND: Good to see you back. Missed your reviews!