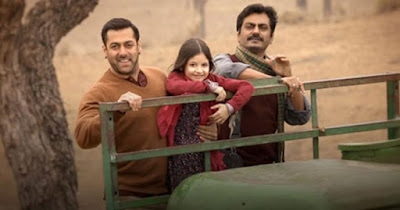 + a female with plenty of agency despite being very young, a foreigner, unspeaking, and an in-context minority

+ no egregious beating up of people by the hero

+ mention, however brief, that dividing humankind by religion and caste is silly

+ soldiers, officials, and everyday folks who do what is right

+ spin on the road trip formula

-  like Baahubali, no need for a woman to go on a quest too, even though she is, you know, someone who works with children for a profession

- border officials who don't radio/call in to HQ to check the story about a lost Pakistani girl, whose had in fact been registered with authorities right away

- last three minutes, which are quite overdone and have shoddy CGI, including the classic mistake of physical objects with no shadow on a sunny day

? meaning of head scarf flying off as she gets stranded in India

? overly simplistic but perhaps in a kind, forgiving way

? echoes of moments of Highway with the happy times on the verdant mountainside

? why didn't they ask their Muslim next-door neighbors, who were already a known source of comfort to Munni, for some help in caring for her/providing her with a bigger competent adult community once they realized her religious identity, even just to get her out of the way of Blowhard Conservative Uncle for a few hours
entertained, satisfied, and slightly teary Beth

Note: I do think this film has the capacity to serve as a powerful piece of PR about Salman's real-life character among anyone who is prone to confusing (whether deliberately or not) actors with their characters. I don't know enough to speculate whether the director meant it as such, but surely the star realized the value. However, will that lesson fall on ears that aren't likely to be convinced already of his good-boy-ness? I doubt it. Uday Bhatia discusses the film's portrayal of its hero well in his review.

* definition by Oxford dictionaries: "A person who appears unintelligent and unsophisticated but who has other redeeming qualities."

** Maybe more than any other performer, if I had to name a favorite performance of his, I would be very hard pressed indeed.

me said…
" mention, however brief, that dividing humankind by religion and caste is silly"

Which is why I was disappointed that the very last words of the film were "Jai Sri Ram" shouted by the previously mute Muslim Shahida, at the end of 2.5 hours in which the Hindu hero never once said so much as a single "salaam". I fully understand why it was done that way, but given the message, such capitulation was still disappointing. It didn't ruin the overall experience, just took a bit of the shine off it.
July 19, 2015 11:55 PM