Somewhere in the final third or so, desperate to figure out how to negotiate successfully with the slippery man who simultaneously makes him and restrains him, anti-hero Johnny Balraj seethes "I get to decide how much I'm worth." That is the unyielding myth at the center of smooth, rich surface of the world of Bombay Velvet. Johnny, best friend Chimman (Satyadeep Misra), singer/spy Rosie (Anushka Sharma), rising wheeler-dealer Khambatta (Karan Johar), detective Kulkarni (Kay Kay Menon), editor Mistry (Manish Chaudhury), and union boss Deshpande (Sandesh Jadhav) all chase the goal of determining their self-worth, and almost all of them fail. (For the sake of spoilers I won't say which one actually does confidently stake their own value, but it certainly wasn't the one I was expecting.) The wispy (and not very engaging) surface story about real estate mirrors this question too, neatly framed in Khambatta's narration in the history of Bombay geography: the swampy water that nature filled in between the seven islands was worthless, but what we big bosses say we'll do with the reclamation is priceless. The repeated comparison to the great island wealth factory that is Manhattan reminds us that at the foundation of the golden dreams is a swindle.

Kaizad Khambatta, the most interesting and most richly-written character, offers and embodies those glittering promises. When Karan Johar first shows up on screen in brilliant yellow, sassing a bank teller and instantly smitten by Johnny's unsuccessful heroics, I was thinking "OH YES" because it seemed like something very interesting might be afoot. The persona of KJo, at least as seen in the velvet-blazered bully-host of his tv show, runs throughout Khambatta's meticulous appearance, favoritism, set-ups, suck-ups, and indulgence in snark. (Aside: can the casting of KJo be read as a nod towards Khambatta being a symbol of the film industry establishment?) At least according to the subtitles, only one disparaging comment is made about his sexuality, and it is never depicted as a weakness to exploit or a sin to correct. Khambatta is all about control, and nothing distracts him from his goals, a pleasant change from homosexuals who are portrayed with all-consuming libidos. The other characters see Khambatta the way he wants them to see him; however, we get a glimpse of him in his boxers sitting next to a miniature version of Michelangelo's David, decidedly not pulled together, not glamorous, and not the idealized male form. I am not surprised to think KJo does such a good job because he's always struck me as someone who creates personas, both for himself and in films, but nonetheless, as more or less his adult debut, it's quite impressive (and a very good choice of role). 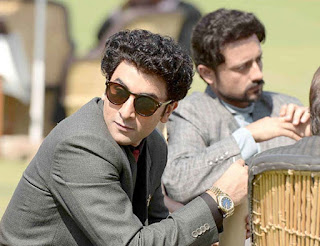 As for the other actors, I have nothing but praise*. Many of the performances are stylized, I assume to complement the unrealness of the story and sets. I have been avoiding reviews of this film but scanning past tweets I saw a few references to the performances being stilted and emotionless; I guess I can see that, but whatever they're doing works for me. Satyadeep Misra is most definitely the standout; like KJo this seems a perfect fit of actor to role, and he says as much with his eyes and postures as Ranbir does shouting and toting tommy guns. His calm and reasonableness contrast so satisfyingly with Johnny's wildness. Kay Kay Menon is underused, and I hope he has some scenes that will re-materialize for a director's cut on DVD.

There are two things about Bombay Velvet that didn't quite sit right while I was watching and still don't as I write this hours later. Most significantly, much of the Rosie-Johnny romance is pretty unconvincing, particularly in its initial stages. Heroines falling for asshole heroes is nothing new, so it's not the issue of him being a stupid choice of affections, even after plenty of evidence that he is a capital-letter Bad Man. I just never got the feeling there was anything of substance between them other than convenience on her part (or, more charitably, pragmatism) and a desire for something pretty and capable of expressing love (at least through song) on his part. Somewhere in the film, she says something like "No one has loved me like Johnny does," but it seems to me all the other men in her life have treated her the same way: targeted her, more or less enslaved her, and used her for their own gains. No surprise that she thinks Johnny's puppy-dog eyes suffice for "love." She also says that Johnny taught her to hit back, but the flashback to her pre-Bombay years shows us that she already had that life skill. And on the topic of the flashback, that segment was interesting and nicely done** but ultimately unnecessary. Audiences have seen enough angry young man films to imagine the kind of background these three kids have. I would trade the runtime of the flashback for more scenes in the early stages of Rosie and Johnny's acquaintance and romance. "Ambitious man sees pretty woman and claims her" is beneath the scope of this film.

The lesson in the fable of Bombay Velvet is that you cannot determine your own self-worth, especially if you're aiming at the highest rungs of the power structures. There is always someone more powerful than you, with more to lose than you, who can decide. You can try—and I think the film is saying you should try—but you should not be surprised when you do not succeed. And that surprise is what makes Johnny and most of the other characters a little bit maddening but also a little more sympathetic than they might be, given the horrible things they choose to do. It's almost as though willful ignorance of potential consequences is necessarily the armor you must wear to fight resignation to your lot in life. We see it in Johnny very early in his arc as an adult: he hides his stolen gold biscuits somewhere really stupid, he finds inspiration in James Cagney, he goes after a woman despite no encouragement from her when she is clearly under the protection of another big shot, and he deliberately takes on enemies bigger than he is. This cage fighting over and over against the same opponent*** probably tells us more about Johnny than anything else he does: not only does he relish going down swinging, he pays for the privilege. At first I thought he would improve until he wins, but he says point blank that getting bashed up is his hobby, and he clearly loves just being in the fight.

For me, the beautiful and relentless period setting of the story and the often stylized ways it was told emphasized director Kashyap as a fabulist. In addition to the just sheer gorgeousness and visual interestingness, it lets the creative team make juicy allusions. When Inspector Kulkarni chases after Johnny in a hotel named Shalimar, we know the criminal will get away. And it creates the setting for a fantastic soundtrack like this one. What a brilliant escape from other movie music that sounds so interchangeable. Amit Trivedi's work may endure culturally as the fingerprint of this project. I cannot speak to the accuracy of all these period details—much of the look seems more like 30s Hollywood to me than the worlds depicted by Indian cinema of the 60s (again, no measure of accuracy)—but all of them build a world that is clearly not the one we currently live in and thus the kind of canvas that can support the big dreamers and risk-takers of the story. Not-here and not-now benefit stories like this. Exaggerated decisions and reactions don't have to fight with "sense" when they live in a world that isn't real to us. Like the characters' ignoring what might happen if their risks go wrong, maybe the visuals here are the velvet we need in order to soothe the tragedy of the moral of this story.

*  With the exception of some of Anushka's lip synching, which is distractingly bad in several of those glorious songs. I don't know what happened; I've never noticed her being bad at this before (unlike Parineeti Chopra, who just cannot sell a song to me despite being a competent actor).

** The boy who plays young Johnny looks so very like Ranbir. Great casting!

*** Is it notable that this guy is called "Japani" even though the actor credited is surely Indian? There's not a lot of talk in this film about foreign influence or even interactions, but it made me wonder if he's supposed to represent the Japan of our stereotypes: rule-bound, super-efficient, focused on the tiny and the mechanized, all of which are in stark contrast to Johnny's world.