Kick 2014
Everything about this movie is a giant LOLWUT to me, but I sure had fun watching it. And pleeeeeease make Nawazuddin Siddiqui the next Bond villain.

Jodi Love Dile Na Prane 2014
Perhaps this film is a little bit too meta and precious for its own good: if memory serves (and it might not, given what time it was for my body clock when I watched this on the flight from Chicago to Dubai), it's a Bengali film about Bengali filmmakers being asked to make a romantic Bengali film at the behest of an investor who hopes the project will convey his love to his wife. I guess that's an interesting change from movies about movies having to meet commercial interests, but it puts an awful lot of pressure on the movie-in-the-movie's writer to come up with something really, really good—and as a result I'm not sure what to make of, and how much to invest in, the story he tells, which is based on his older cousin's dramatic love affair as a younger man. How much of it is "true"? Does that even matter? Does it actually help anyone to learn why life has turned out the way it has or to act on feelings that have been festering in isolation for decades? I'll happily take Abir Chatterjee as a lead in a love story, but romantically or artistically frustrated Calcuttans who make bad choices are a common enough occurrence that this iteration doesn't really stand out except for its unnecessarily unsatisfying end.

Roy 2015
Running the risk of going down in history as a Roy apologist, I will argue that the story of this film could have been really good but it was utterly ruined by the execution. Simply do not cast Arjun Rampal in a role demanding emotional expression—love, creative frustration, isolation, despair, grief—and expect it to work. Do not design the set of a writer's desk to include a giant wall-sized mirror over it and populate it with a typewriter, hourglass, pocket watch, and phonograph and dress him in a fedora and uncle bathrobe and expect us to take this narcissist hipster greasebag seriously. Do not cast Ranbir Kapoor if the only thing you need him to do is sulk—he can sort of pull it off, but whenever he comes on screen it's hard not to think of what a waste of his talents this movie is. Do not call the movie-within-a-movie Guns 3 if the only thing hit by a bullet is the ocean. Best line of the movie? Cyrus Broacha asking the fictional director "Is Guns 3 the end of the trilogy?" I have no idea if that was meant to be a legitimate question, but the fact that whoever was in charge of Roy left it in is all you need to know. The only thing this movie does well is serve as a bang-up tourism video for the resort in Malaysia where most of it is set.

Also, please, please don't have a backing dancer wear a Run-DMC t-shirt while others wear afro wigs and yet another person has a guitar with a confederate flag on it. 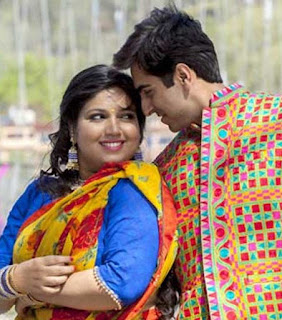 I saw this in the cinema twice but didn't understand much of the dialogue either time, so I think I should wait until I have a DVD with subtitles to write about it much. However, based on what I did understand and on conversations with people after the film, every rave review you've heard is absolutely merited. For those of us who have, in the words of a friend on twitter, for whichever of a myriad of reasons violated society's definition of how femininity should be performed, this film has our hearts in its hands the whole time, and it is very respectful of that power. There is a scene early on in which Sandhya (Bhumi Pednekar) startles and is chastised by her parents and in-laws for dancing when they think she shouldn't be, even though everyone else is, that had me fighting back tears. I didn't catch why they were upset with her; going off of visuals and tone of voice, I got the impression they thought there was something unseemly in her joy, and therefore in her very nature, a critique I've spent way too much time in my life fearing despite never once receiving it (that I know of). She gets hers in the end, and watching her confidence and well-founded self-respect is so satisfying, especially in the face of a husband who so obviously lacks those things. My favorite part of the film may be the end: "Dard Karaara" is so perfectly perfect as a replica, as a celebration, as a do-over for this couple who through it prove doing things together as a team wasn't a one-off. Yes, it's a fantasy visually, but it's very real in spirit.

Happy Ending 2014
Why did everyone hate this when it came out? I think it's funny and breezy, and I appreciate the experiment of a story about people who are their own worst enemies instead of facing fantastic hurdles from the outside. As much as I like Saif Ali Khan, here quite in his good-at-duplicitousness form as someone struggling with the lies he tells himself*, the star of this for me is Preity Zinta as an appropriately exasperated grownup guiding hand. Govinda's great too and he's present just the right amount—more wouldn't have made sense. My only problem with Happy Ending is Kalki Koechlin's character, who is written too broadly to be believed as a threat or obstacle. Note how geography is used in this: the American context may be significant for characters who are searching, reinventing, running, and lying, in contrast with the words and emotional heft of the portion set in India.

* I think I've seen way more bashing of Saif Ali Khan for being too old to play this kind of moronic lovesick manchild character than is deserved, given that that is what many Hindi film heroes do much of the time, by actors who are older than he is, and in this film (as in Cocktail and Love Aaj Kal) the character is critiqued for being such. Also, it's not his major character type; if you look at his last ten years of films, he does other things more than he does this (Bullett Raja, Go Goa Gone, the Race films, Agent Vinod, Aarakshan, Kurbaan, Thoda Pyaar Thoda Magic, Omkara...).

Finding Fanny 2014
It's a truly ensemble story and production; no one outshines anyone else, and that's how it should be. Everyone is different and they also all change and grow (as should happen in a road trip film) in ways that feel genuine. Arjun Kapoor is a pleasant surprise, with his sullenness working in his favor for once. A bit like Happy Ending, these people are blocked in by their own heads, past mistakes and fears chaining them to discontent. I like that the rural and small town features of this story are not the limitations; your ghosts haunt you wherever you go, and home is where the heart is.

Break Ke Baad 2010
That drifting, blurry feeling of jet lag is the only possible excuse for watching this so long after any discussion of it could be possibly be relevant to anything (except possibly the vast improvement of Deepika Padukone's skills). This is a terrible film, and like Roy it's the execution that fails much more than the concept: taking time to think and demanding space when you need it are important life lessons, especially for women. However, following someone to another hemisphere when they've told you quite explicitly they don't want to see you is horrible, as is worming your way into their daily existence. The hero of this film is thus a stalker extraordinaire, hidden in the non-threatening face of a charisma-free Imran Khan (whom I usually like—I know many of you don't), creating a version of the ever-dangerous "nice guys finish last" lie that the socially inept, manipulative, and/or self-centered like to tell themselves. This movie is proof that Deepika hasn't always been as good an actor as she is now, and the two of them have absolutely zero chemistry.

Hisss 2010
You guys, this movie is fun. There are many ways in which it isn't good, and there are some sex scenes I did not need to witness, but seeing a new version of standard nagina films is a great way to spend a few hours. I love the snake-to-human, human-to-snake physical transformations, and I can even deal with the repeated violence against women in this because the nagina's retribution against reprehensible men is pretty satisfying (because she is, after all, an animal, not a human with a conscience who comes from a society with ethics). This is every bit the exploitation film that some earlier versions have been, but it's interesting to see a classic story wrangled into a modern setting (and the way religion has to pound down any skepticism about what's really happening) and with modern effects and permissiveness.
Labels: house favorite: Ranbir Kapoor thoughts on movies

Rishi said…
Isn't this your 10 year anniversary of this site? Did you do anything special.

Also, could you tell me why Bollywood memsaab isn't posting anymore.

Beth Loves Bollywood said…
Hi Rishi - Yes indeed, it's my ten year anniversary! I haven't done anything special because I haven't figured out what I should do, but I'd like to note it somehow.

Rishi said…
Shashi Kapoor is getting the Dadasaheb Phalke award and he's receiving press.
Some nice articles and I thought of you(He's your fav. correct?)

Here's a nice one:
http://www.thehindu.com/features/magazine/shakespeare-plus-bollywood-wallah/article7039513.ece

Anonymous said…
I absolutely hated the hell out of Happy Ending. But I think it's a case of high expectations not being met. If I had known that it was a regular Rom-Com, I might have liked it...but the director duo made me expect far more from them with 99 and Go Goa Gone (even Shor in The City to some extent). I totally agree that Saif's choice of roles is far superior to anyone else close to his age.

Beth Loves Bollywood said…
Ignorance is bliss sometimes - I ignored pretty much everything I could re: Happy Ending, so I didn't have too much by way of specific expectations except based on the directors' other films, of which I am fond and which I find interesting even in their weaker spots (I haven't sen Shor but need to). A long time ago someone told me that Saif has been compared to Shashi Kapoor in his early career (affable romantic lead who doesn't always make a strong impression, I think they mean? - quite unfairly) and now I'm seeing it in the projects he chooses to back with either his acting or his production house (or both).