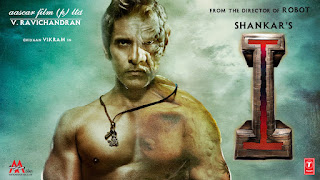 Do you ever get the feeling that you may know what is happening in a film but you're not certain  you know why it's happening—or if there even is a coherent "why" other than entertainment value?
Having seen just one other work by Shankar (Endhiran), one other performance by Vikram (the Hindi Raavan) and just a handful of other Tamil films, I'm flying blind on this one and unqualified to guess much at that "coherent" why (or its potential absence). There are passages and details in I  that I simply cannot process, some of them because they blew some part of my brain out and I haven't yet reassembled the pieces. Here are some of my personal truths with this film.

You may not be able to tell from everything I've just said, but I loved I. It's enormously entertaining and philosophically compelling. Even with its problems, it's actually about something, a trait I've recently realized can make all the difference for me in feeling positive about and wanting to engage with a film. Vikram is a treat to watch. He did wonderful physical work on top of a significant structure of distinctive writing, wardrobe, and makeup, and the result was all effect rather than effort. There was no strain in all that work, just joy, which is such a treat. It's an exuberant, interesting film, and I can't wait to see more of Shankar's and Vikrams' filmographies.
Labels: Tamil thoughts on movies

Unknown said…
I am also a big fond of Vikram. I am from North India but I saw "Aprihit" at least 5 - 6 times.

I think you should enlarge the width of your blog and increase the size of your font.

Unknown said…
Totally agreed with you. This new venture of Shankar will be the next big thing in Indian cinema. Check out this: http://blogtobollywood.com/
January 29, 2015 4:54 AM

Anonymous said…
I always believe in simplicity in stories. Though with special effect you can add extra spices to the movie but please do not ruin the story lines.

Anonymous said…
Loved the review ! And nodded along to almost all your points, except about yawning during Pookale. I loved that red color part of it, and Vikram looked spectacular. P C Sreeram FTW !

"Even with its problems, it's actually about something, a trait I've recently realized can make all the difference for me in feeling positive about and wanting to engage with a film"

One word more about Osma, the transgender character. The hero (and his sidekick)'s treatment is cringe worthy when they meet her. Then thankfully Santhanam disappears, but Vikram is still quite uncomfortable around her. But gradually, he starts calling her Osma and near the end of the China photo shoot, starts behaving normally around her.

What I liked more was Amy Jackson feeling slightly jealous of Vikram and Osma riding their bike together after Vikram learns about Amy's play-acting. (I hope that was the spirit in which it was meant ! ) Reminded me a bit of Manisha Koirala's jealousy when Kamal and Urmila are together in Indian. So if the heroine respects her enough to be a rival, at least for a few minutes, that's something right ?