SO GOOD. A heroine who is a complete, complex, smart, funny, imperfect person—and by imperfect I mean full of conflicting needs and passions, not just "falls down endearingly in front of the hero." And a hero who's an actual nice guy whose struggles are equally empathetic. That scene when he opens the door of the room where she's been hiding just breaks my heart—there is such love in it, and so many films would have played that moment as humor or pity rather than the moment of very precious affection and understanding that this film chooses. 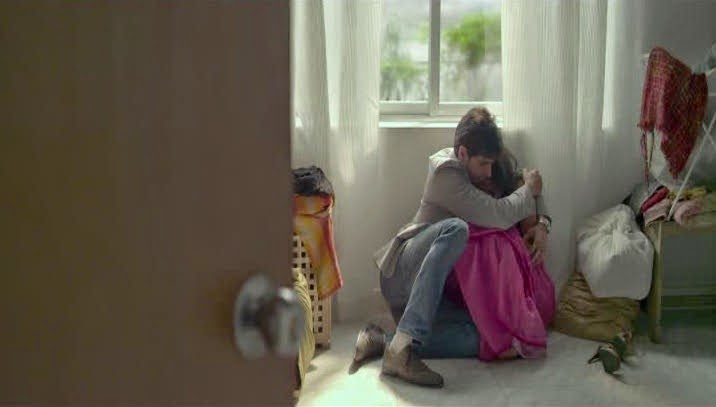 For all the misleading/inappropriate "SHE SO CRAZY" style promotion this movie has (the DVD cover, for example), the romance in it is utterly natural and makes so much sense. There’s nothing cuckin’ frazy [note from Editor Self: UGH] about it.

Gunday (did not finish)
SO BAD. What a spectacular waste of a decent concept and the charisma of Ranveer Singh. In the parts I could get through, I was instantly put off by the attempt in the boys' childhood to shock and awe us into being inspired by the trials that forged their devotion to one another. I can't put my finger on why this was such a disastrous take on elements that seem right at home in my kind of 70s and early 80s masala. It must also be noted that Gunday created the opportunity for this perfect text from Bastard Keith: "Irrfan is majestically apathetic in GUNDAY. Sets a new standard for no-fucks-giving." I almost wish I could have sat through enough of it to drink in that majesty. Maybe if someone makes an Irrfan supercut, I'll try it.

Total Siyapaa (fast-forwarded through some of the middle)
There's nothing wrong with Ali Zafar's latest, but there's nothing particularly right with it either. Everyone is likable but nobody engages. Maybe having so much of the story constrained to one apartment somehow sealed the lid on his not inconsiderable charm. It reminds me of a blend of elements from Seinfeld* without creating the same level of humor and even a runtime that clocks in as stingy for a mainstream Hindi film is too long to be about nothing.

* It's actually a remake of the Spanish film Only Human, which I saw long enough ago that I didn't notice the resemblance (you'd think the soup would have done it!), but reading a plot summary makes the connection quite clear.

Ankhon Dekhi
This is such an interesting and emotional film, and I applaud Rajat Kapoor for creating an intricate environment for both characters and audiences to live with different philosophies and for filling it with such amazing actors. My heart soared with the father-daughter love, squished with the young romance, wept for the brothers, and sank at the end.

Initially I was frustrated that the central character made such a huge, shockwave-sending decision out of what turned out to be a relatively small incident. But who am I to decide whether someone could have a blistering realization and change his life because of what he's witnessed? More of us should, given the state of the world, but we should probably do so with more true consideration for others than this otherwise gentle, sympathetic man did. Raje Bauji lives by a spin on the golden rule, treating others as he assumes they should be treated following from his own life-altering principle, and I think he values ideas (his own epistemological theory, specifically) over people. A mindset that begins in moments of genuine kindness to others ends up a disaster of solipsism.

Main Tera Hero
Flip the switch of your critical thinking off and your Varun Dhawan appreciation on, on, on. I'd never have made it through this film if I hadn't. On paper, all the main male characters in this film are despicable; even just in their personal lives, they are liars, bullies, thugs, and extortionists. The first fifteen or twenty minutes are odious, setting up the worst kind of smug, entitled, proudly stupid jerk as the hero, the kind who becomes the desired romantic match because he, unlike the baddie, hasn't shot someone yet.

Yet in struts Varun (actually, he's reclining on a motorcycle that is moving without him having to do anything, just as Ranveer Singh did in Ram Leela), owning this movie like the birthright it is, and we're off to the races. This isn't my kind of comedy at all, but he and Ileana D'Cruz have some physical gags that work well, and post-interval it's easy enough to coast along with the silliness and forget that these characters have inhabited and inflicted some incredible violence (despite all the action happening in the gang boss's house).

Amrita and I have been discussing how this year's films keep inverting what we thought we knew and liked: we're truly enjoying the kids from Student of the Year (which we thought was terrible), we're wowed by Kangana Ranaut, Abhishek looks like the best part of Happy New Year (who is a favorite but whose choices lately have not excited me), and we want to see a Sonam Kapoor remake of a Rekha classic. WHAT IS HAPPENING?!?!
2 States
This is my first experience with Chetan Bhagat in any form (except being at the wrong end of a mighty brain on tv) (no, I haven't seen 3 Idiots, nor do I wish to) and I am not impressed. This film is a very nicely presented slice of the lowest common denominator of humor and stereotypes. It's shallow, tiresome, and far too long. Between this and Gunday, I'm done with Arjun Kapoor. Maaaan, do something resembling anything with your voice and face. [Note from Editor Self: this is one of the best scenes in American cinema.] I'm also very concerned about these two characters because they spent all their years at IIM making, by their own admission, absolutely no other friends. That does not bode well for their future in dealing with the rest of the world that is not comprised of each other.

Ram Leela
Wowee! I love this, much to my surprise, as I am not a fan of the usually self-indulgent Sanjay Leela Bhansali and switched off his previous film after only 20 minutes. For once his theatricality and extravagance serve the story and the audience. Leela and Ram live such scrutinized lives, surrounded by audiences all the time, that of course they act like people in a heavily scripted drama. For all the skin show, they are eventually (and appropriately) smothered by all those textiles...and walls, weapons, and flunkies. The world created is complete, as is their isolation from the beneficial effects of anything other than their own insular culture. The internet, cell phones, porn, an engagement to an outsider, years spent in the big city: none of this enables them to escape. This is a staggering text for anyone wanting to look at representations of cultural systems, gender, and power, and I think that in the decades ahead this will hold up as an example of what cinema in 2013 could do.

Bullett Raja
Although I actually watched the whole thing, Saif Ali Khan's non-Shakespearean attempt at UP badassery is a bit like Gunday in that it has 70s and 80s masala elements—bhai-bhai friendship, slight detours into religion, corrupt politicians, even the random switch in action to Calcutta (which is  basically an extended song-teleport)—but just does not work for me. He and Jimmy Shergill have excellent camaraderie, but that is not enough to sustain the whole film. Especially after interval, it just drags in an endless cycle of kill, revenge, kill, revenge, kill kill kill. Sonakshi Sinha's character is surely the most irrelevant one she's played yet; supercop Vidyut Jamwal seemed to be in a completely different movie, and not in an "oh that's an interesting contrast" type of way. It has a some good moments: some of the visuals of the streets, the trio's excitement at being in Mumbai for the first time, Saif's throwaway line beckoning Jimmy with "Aao, mere Shashi Kapoor." I adore Saif and appreciate his experiments into different kinds of heroes and villains (sympathetic and not, mainstream and not, comic and dramatic) and wanted this to be so much better, but unless you're a Saif or Jimmy completist, there's no reason to watch it.

Side note: to my naive ear it seems Saif is using a different type of Hindi than he uses in his more urbane roles. Comment?
Labels: house favorite: Alia Bhatt thoughts on movies

EJ said…
I don't have much patience to watch movies though I actually wish to see a lot of them...that way English movies serves me right...

Loved your comment and my curiosity about most of the movies in 2013 and 2014 are satisfied.

Between I recommend that you start watching more of Malayalam movies..There are few awesome ones released recently. - Drishyam, Om Shanti Osanam and of course Bangalore Days to name a few.
August 24, 2014 10:42 PM

Deepa said…
I really liked Hasee Toh Phasee too, such normal, non-filmi characters and many tender moments (like the wet towel on tummy to deal with hunger). Siddharth is adorable, I predict much future success.

I found Ram Leela a bit much but very much enjoyed all the Gujarati culture ( I lived in Gujarat for 15 years).

veracious said…
Hey, I'm doing my once-every-3-months Bollywood catch up, and thus reading through everybody's blog posts I clicked on but only skimmed until now. We totally disagree on Hasee to Phasee but I'll still take your word on Gunday - every trailer I saw of it in India made me groan audibly.

You're doing important work, watching the Bullet Rajas of this world. I'd say God's work, but Saif fans are godless - we've lost all faith of another Omkara being around the corner, so why should we believe in higher power?

I'm kind of like, gosh, who knows, maybe I'll get back on that faith and watch this, but for now I'm relapsed. Fully relapsed.

Unknown said…
Could anyone help me find the movie Janam 1985, because its very important for me.somehow it has been decisive for my childhood psyche and i would be fully gratefull to anyone who could find a way to watch again that movie. If you find something please contact me or send the link in my address oris251@hotmail.com. thank you very much.
October 12, 2014 4:29 AM