(The screen grabs are from the 3D version of the film, so they look awful here.)

"A Hindi version of Harry Potter ca. 2004" seems like sufficient description, but even after watching the amazing reports on the film from both Pretentious Movie Reviews* and Neon Harbor's Deja View**, I still didn't quite realize what I was in for. It does tick certain boxes dictated by basic Harry Potter elements and Bollywood standards: moppets in uniforms, a blonde bully, both helpful and mean adults at the school of magic, an airborne sporting event, filial loyalty, family vengeance, useless comic relief, grating child actors, big dance numbers, plenty of familiar faces, 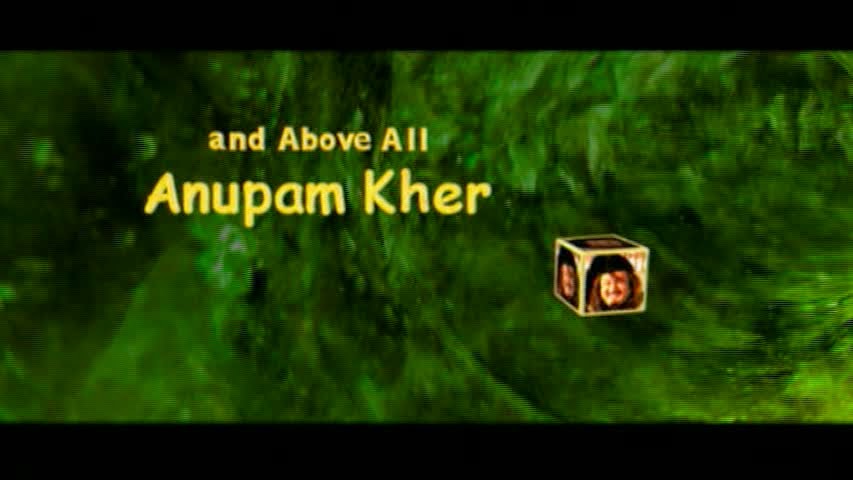 and a frankly more awesome than anticipated villain lair with a fanged entryway flanked by vaguely Ashoka-capital-esque pillars. 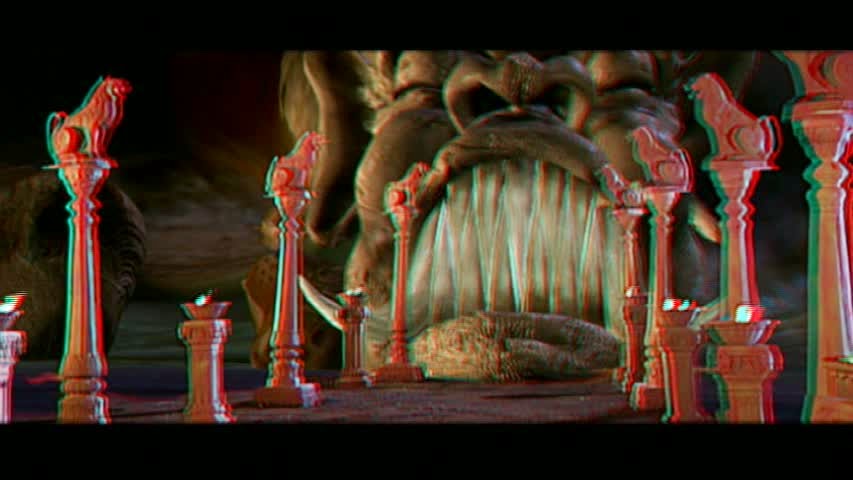 It also throws in much, much more, like imported glamor;
the twin of Shania Twain's outfit from "That Don't Impress Me Much"; 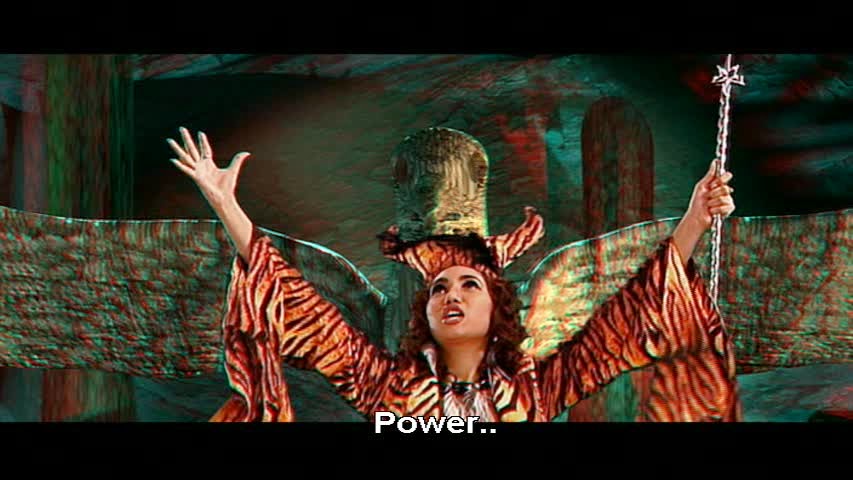 kids who don't realize that a genuine Unnecessarily Bengali Professor*** 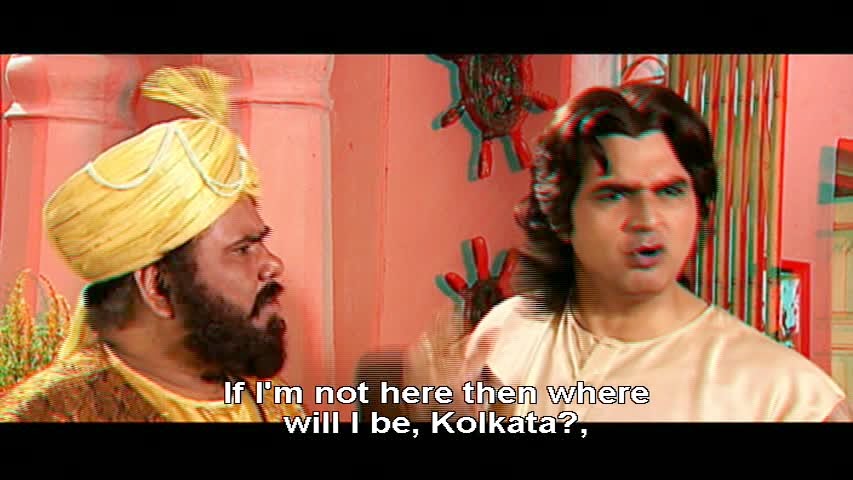 would never volunteer for a physical altercation;
a terrifying inflatable knock-off Spider-Man; 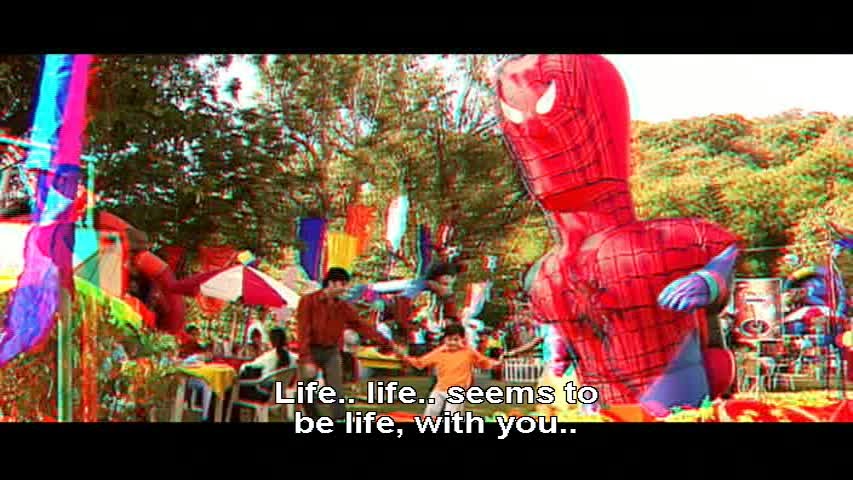 mean-spirited jokes based on darker-skinned people, non-traditional women, the overweight, and punching people in the face even though this is ostensibly a film for children; 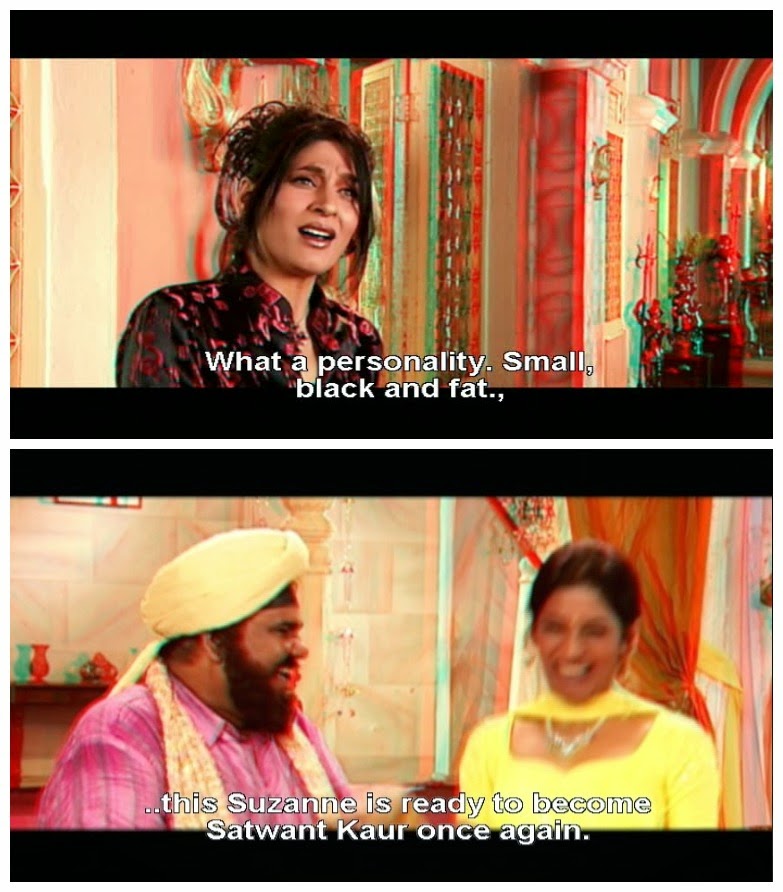 and a friendly ghost whose shape and hat bring to mind Mr. Hankey the Christmas Poo. 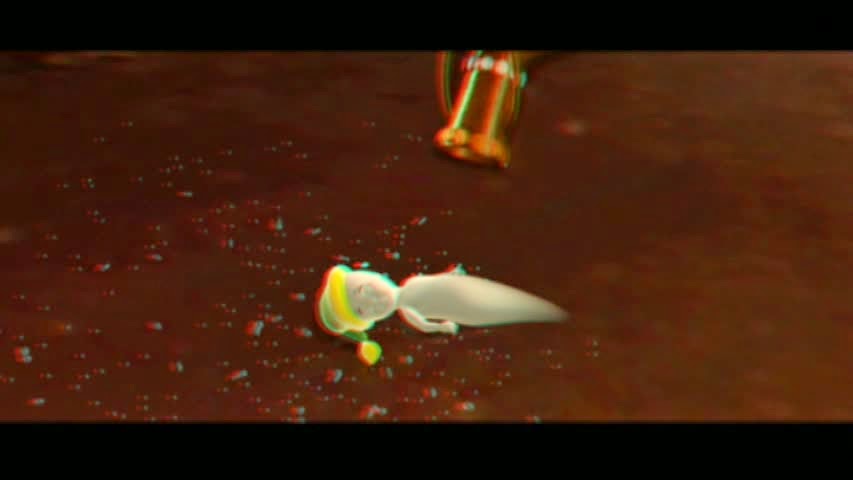 But the weirdest part of all—because honestly none of what I've listed above is that weird, since this is sort of B-grade Bollywood—is that  the evil principal/sorceress (aka RB)'s plan to rule the world is by forcing our hero (Shanu)'s father (Rahul), also a magician, to create...plague? a grain fungus that will create food shortages? a poison distributed by radio-controlled locusts? No. An aphrodisiac. 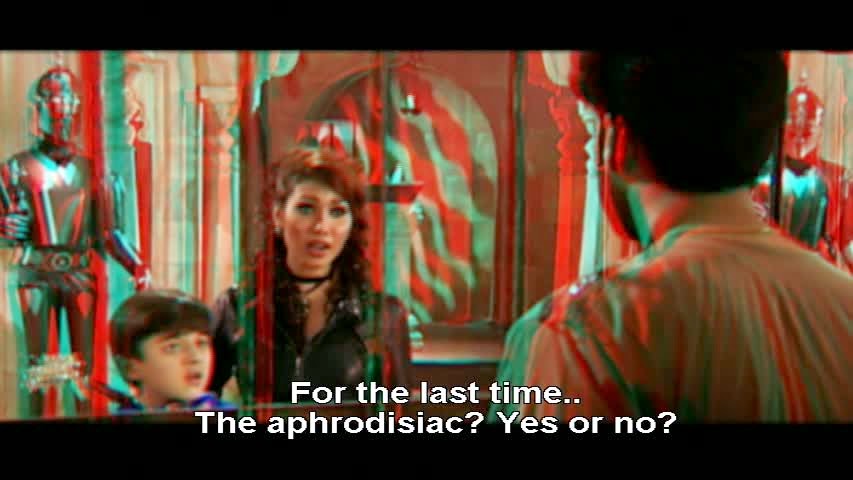 The subtitles state this over and over again, so that's the idea I operated under, and I gotta tell you, it re-orients the tone of this movie considerably, adding a nagging feeling of "Soooo...is this...sexual?" to much of what RB does. In one very obvious example, Rahul tells her she needs to become a more virtuous woman (eyeroll), and she replies saucily "I'm a woman, not a stone." She uses her magic wand to swap his prisoner togs for a sheer shirt à la SRK in "Suraj Hua Maddham", give herself a fringed bikini top, and then conjure up some sort of item-y song.
Oh and by the way, Shanu and his friends have sneaked into the lair and see this whole song. Yuck. Later, RB watches a huge dance number performed for her birthday by members of the school, including the Flying Carpet teacher (Archana Puran Singh) (MS. BRAGANZA AH-HAAAAAAA) dressed in an abs-baring silver top doing lots of showgirl shimmies. 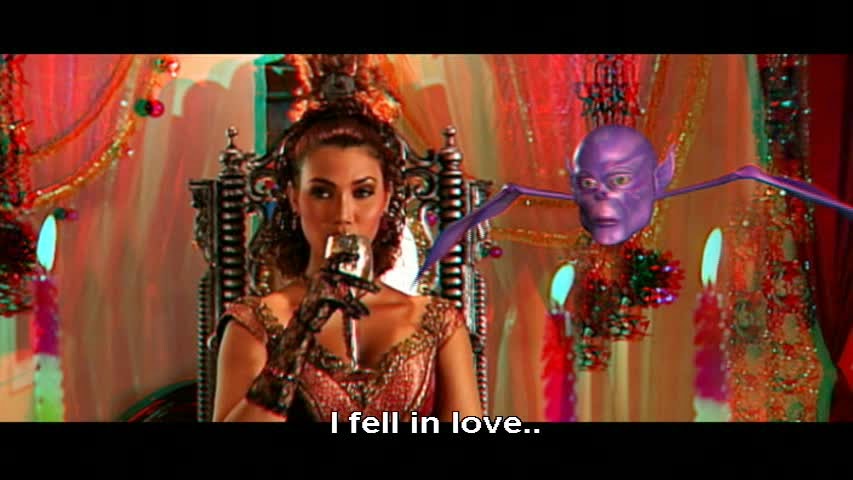 I couldn't stop giggling when Shanu gets a powerful magic wand and his two female friends admire and stroke it lovingly. I'M SORRY. You know how Bollywood loves to claim its films are pure as snow when song sequences in particular are dripping with innuendo, thrusting, moaning, etc. It's really not that much of a stretch to imagine some of that got rolled into film aimed at kids.

However, when the topic of this potion comes up again in the big brawl at the end of the film, in which various characters are almost killed and this potion restores them, it's clear that in fact it's a potion for eternal life. I went back and tried to isolate what the Hindi word being subtitled as "aphrodisiac" was, and sure enough, even I can understand that a term with "amar" and "jeevan-" in it probably has more to do with death and life than with prem and ishq.

Eternal life is much less interesting, don't you think? Now I'm really curious if any Hindi movies do have villains whose plans for world domination hinge on an aphrodisiac. Seems as likely as anything else.

In the Deja View link above, the host says Aabra Ka Daabra adds a whole new dimension to the Harry Potter universe, and I can appreciate the sort of fanfic/riffing/masala blender qualities this film could have. I don't particularly care about Harry Potter, so apart from a vague academic interest in what the makers would try to copy, whether/how they would add in standard masala elements, at what the overall point of the film might seem to be, I wasn't expecting too much, and that's also where I wound up. If nothing else, though, the film is an exemplar of reach exceeding grasp, a frequent ingredient in any conversation about remakes, translations, and "so bad it's good." Bollywood could have done an acceptable spin on Harry Potter stories; this film's problems are not so much the effects and visual design—though personally I'd prefer Babubhai Mistry to computerized tricks that have aged badly—as the inconsistent writing and godawful acting. If this had been populated with kids as talented as those in films like Taare Zameen Par and Stanley Ka Dabba and a director adept at working with them, and if the adult performers had been less hammy and theatrical, it could have been cute. Not amazing, and not particularly memorable, but timepass. It's not the film's fault, but I am left with the sad realization that the most interesting thing about it was actually a misunderstanding.

* You know what this is, right? Right.
** You may not know what this is. It's my friend Ed's series on foreign remakes of American and British blockbusters, his area of special expertise. Last week we watched Sangharsh, aka Bollywood's Silence of the Lambs, and I'm pretty sure I'll never be the same again.
*** Term courtesy of Pretentious Movie Reviews. I'm kind of sad that the four Bengali professors I know are not unnecessarily so and thus I have no reason to call them this.
Labels: thoughts on movies

Nikina Maqsood said…
I'm reading this and really really hoping that this is some ridiculously over the top synthesis of Mr India, Shalimar and a dozen and one identikit 80s masala messes. I don't want to watch it and be disappointed.
August 17, 2014 8:20 PM

Beth Loves Bollywood said…
Hi Nikina -
I empathize with such a wish! However, I don't think Aabra Ka Daabra remotely lives up to it. I think it lacks the exuberance that makes so many grand masala films so fun. It's more…flat.
August 18, 2014 8:53 AM

Admin said…
I generally watch bllywood movies but i first time hear this movie name Aabra Ka Daabra and i think you are not satisfied with the outcome. It is unfair to compare it with the hollywood biggies.
August 19, 2014 1:43 AM

Beth Loves Bollywood said…
I didn't, particularly, and also it's absolutely fair to compare a remake to the original when the movie itself is hoping you'll be interested in it precisely because of those similarities.
August 19, 2014 8:41 AM