Caveat: my familiarity with current Bengali cinema is limited and not well researched. I'm presenting my honest reaction and opinions, but please know that I am aware they are not supported by a lot of actual knowledge. Also, I watched this without subtitles (but with a native Bengali speaker). Further caveat: I figured out within about two minutes that this is in essence a remake of a Hindi film I saw a few years ago (and of other sources too—and I'll put a further quick note on that at the very bottom of this post after the footnotes), which is why this piece will be vague in parts.

Even though my heart belongs to Calcutta in the 60s, I try to pay a little attention to new Bengali movies, more out of curiosity and an academic interest in the shape of the industry as a whole rather than particular affection for its current products. The Royal Bengal Tiger caught my eye because of its odd-couple lead pair: Abir Chatterjee (if you do not watch Bengali movies, you might know him as the very worried man holding The Canister on the metro in Kahaani) and, as the film's official facebook page lists him, JEET (the orthography says it all). To me, Abir is the poster boy of "reasons to make passes at boys who wear glasses" whereas Jeet grunts and punches people while wearing cleavage-bearing shirts in Telugu remakes. I am 100% confident there is much more to each of them than that, but such are my impressions from the films and songs I've seen and read about. Twitter friend Milagrenia, who is an actual anthropologist from Kolkata, started the hashtag #masculinitybengal in our discussions about representations and iterations of heroes from different eras, and we both thought this film would have to be a doozy of a document for that research.

The plot, in brief (which you can discern from the trailer if you'd rather see it than read it): Abhirup (Abir) is spectacles-sporting nice guy who seems to have a pretty good life but who witnesses and suffers several ongoing events involving jerks, bullies, and criminals. His son is bullied by a classmate, his wife (Priyanka Sarkar) is frustrated at his inability to get rent from a tenant, his boss (Rajesh Sharma) is furious about a mistake at work, and and his friend at work (Shrada Das) is distraught when he won't protect her from thugs. After one very long, very bad day, a man running through a subway station crashes into Abhi on the stairs. At first it seems like just another insult to a man who doesn't take up much space in the world, but it turns out to be a happy coincidence: it's his old friend Anjan, who's in town for a business trip (his business seems to be selling buttonless [and thus time-saving] clothing to "the U S of A," as he says, but that's neither totally clear nor relevant).

Abhi spills his tale of woe to Anjan, who inspires him to stand up for himself and for the people he cares about. This "standing up" skips over things like reasoned, calm conversation or verbal assertion and goes straight to property damage and beating people with metal pipes. Anjan flips a switch in Ahbi, cackling as he turns him from a decent human into that tiger. My take on the title is that Abhi is only the tiger in terms of rage and has very little majesty, stealth, or prowess, but The Royal Bengal Bulldozer doesn't have quite the same ring.

The Royal Bengal Tiger comes to a more interesting conclusion than I was expecting when I first heard about it—and, it must be said, than the "Actually, violence is the answer!" message it depicts for most of the second half*—but unfortunately that conclusion seems out of nowhere. I hate it when movies do that. It's a failure in writing, which is extra sad coming from co-writer Neeraj Pandey, whose Special 26 I love. But in sum, there are some interesting moments for consideration re: #masculinitybengal. It is only Anjan who can move Abhi to any kind of action, even though they haven't seen each other in years, succeeding where the plight of the people in Abhi's day-to-day life or his personal ethics have not. This might be because, as far as I can tell, Anjan is the only person in whom Abhi confides. I don't think of him as a guarded person, really, but he is comfortable with Anjan in ways he doesn't seem to be with other people, perhaps because there are no expectations or obligations with one another. Anjan also doesn't judge Abhi the way other people do: he doesn't seem disappointed in Abhi's lack of actions (as his wife and child are), he doesn't retreat (as the colleague does), and he doesn't belittle or scream at him (like his boss).

Despite the havoc it brings, their friendship is actually good for Abhi in some smaller, self-improvement kinds of ways. Anjan's philosophy seems to be that Abhi can do better and that he can defeat what scares him. It's also under Anjan's influence, indirectly, that Abhi takes one little step towards something he wants that is independent of this sort of avenging arc; it's a small moment of purely self-indulging pleasure that regular Abhi wouldn't dream of sampling. Except he clearly does dream of it (as he does of an episode of smaller-scale violence against one of his tormenters earlier in the film before Anjan arrives), or it wouldn't be there for "new Abhi" to act on. Even though he's not actually in this small scene, here Anjan moves from being a sort of cheerleader for retribution to a more complicated id.

The duality set up by the characters' natures is probably too broad to correspond literally to our actual lives, but it might work as a mirror of societal ideals for men in their prime that don't allow for complexities and variations by situation. A man is either either sheep or a tiger, though he might move from tiger to sheep when he meets with a stronger tiger. I don't think the film is saying these limited options are good for us as individuals or as a society, but these are the versions of men it shows.** Boys (Abhi's son) and older men (represented by Barun Chanda, whose role in the story I won't share because SPOILER) seem to have more leeway for balanced behavior and assertion without aggression.

Since I do spend so much of my "West Bengal via the movies" time in earlier decades, I like seeing how contemporary movies depict homes, city streets, etc, and I think the design crew of this movie did a great job at establishing full senses of places and the context of Abhi's everyday life entirely visually. There's nothing artificial-looking about his family's flat: their hodgepodge of furniture and decor looks accrued over time, not carefully selected in one fell swoop from a showroom or flea market. The Royal Bengal Tiger does have a song traveling the requisite checklist of Kolkata landmarks, but it also shows a much different version of the city in which major roadways are deserted and metro cars are spotless and empty, all in aid of the story. This is a thoughtfully created film. Abhi's situation turns extraordinary once Anjan shows up, but everything else in the story and in its telling make this a compellingly ordinary world. Even Anjan himself looks pretty ordinary: he's just the hipper, swagger-ier side of the coin of Abhi's settled, office-wallah style (look how similar their clothes are, really, when they first meet in the image above). All of this might be the film's strongest selling point, actually—there's a consistent sense of "this could be you." It's not the all-caps action hero who gets sh*t done in this movie. It's the quieter, buttoned-up all-but-uncle.

And he is surrounded by people who wonder what in the world is wrong with him when he starts thrashing people and will have to face the consequences for his vigilante violence, a real-life fate most heroes never have to consider.

If you share my interest in perusing what's going on in the press regarding Kolkata's films these days, I cannot recommend this movie's official facebook page highly enough. It is a fuh-ass-inating sample of contemporary film marketing and presentation of celebrity. Slash WTFery (see below). You decide. 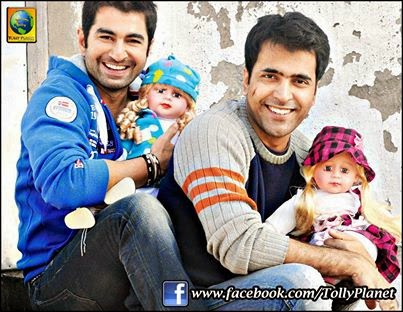 * The most mind-bending is when he encourage his child to strike his bully in the line for their school bus but then breaks it up and gets the kids to shake hands and agree to be friends. Subsequent scenes reveal this plan to have worked exactly as Abhi hoped, with the two boys palling around. Really, movie?
** I kind of wish Anjan had been a woman, but I guess Kahaani already referenced a Durga advisory figure?

A note on the, um, source material of this film: in addition to the Hindi film it reminds me of, I'm told that it's also a clear remake of a very famous American film that I haven't seen.
Labels: Bengali thoughts on movies

It's kind of amusing to see a complete outsider (for the lack of a better explanatory word) taking so much interest in contemporary Bengali cinema. Sure, there are a lot of indigenous (read Non-Bengali) and International takers for Ray-Ghatak movies. But it indeed is heart-warming to see the 'Bangla New Wave', as we Bongs like to call it, getting attention from unexpected quarters! You might want to try out films by Siboprasad Mukherjee and Kaushik Ganguly (if you haven't already). I personally believe they are the best directors of 'arthouse meets commercial' genre Bengali cinema currently has.
June 22, 2016 2:05 AM