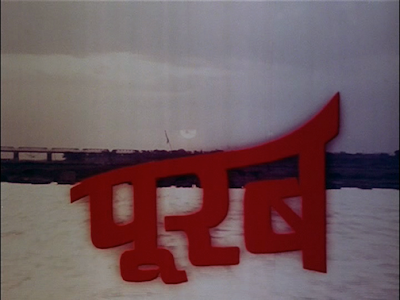 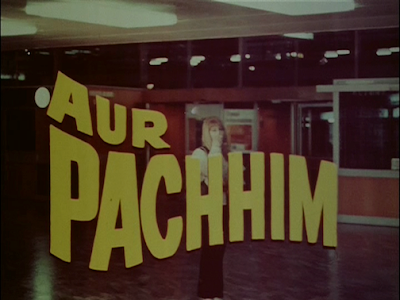 The thing about Manoj Kumar as the director in this film is that he's always up to something interesting, and as much as I may disagree with some of his values or how he portrays them, I certainly cannot accuse him of being boring or thoughtless. Even before the film has introduced its (anti?)heroine, he switches from black and white to color as time leaps forward from the 1940s to the 60s, gives a doozy of a patriotic-looking song introduced by an emcee mired in the debate over using Hindi or English, and uses typeface and background imagery to underscore the contrasts implied by the title. Just like the work of Feroz Khan at the other end of the moral spectrum of films with a writer/director/producer/star, there is always something going on in any frame. 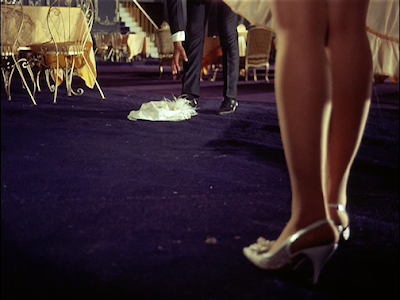 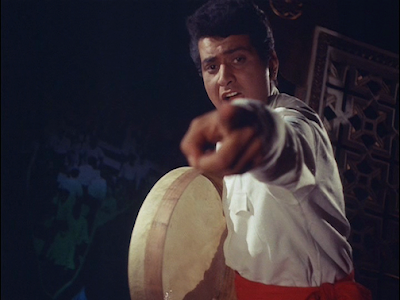 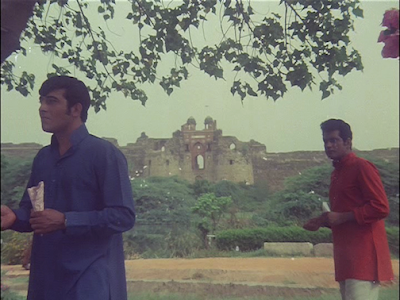 There is even a scene that made me laugh out loud, which I was not expecting at all. After they've fallen for one another, there is a great wordless exchange between Preeti and Bharat through a closed window as she tries to get him to put down his books and dance with her. Saira Banu is grating throughout most of this movie but having her mime instead of talk makes her more likable and successfully expressive. I didn't know Manoj Kumar was of the mindset to attempt humor, let alone capable of succeeding at it. 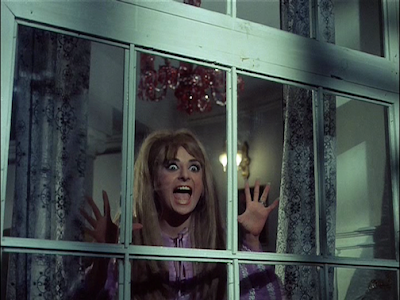 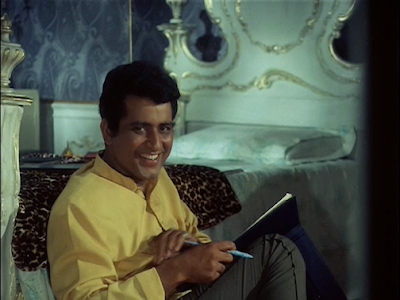 Purab Aur Pachhim was not nearly the "westerners are evil" film that I had gathered it was from years of hearing people talk about it. I think the film reads much more as "the west makes Indians forget their Indian-ness, with 'Indian-ness' being defined by me, Mr. Bharat"
than it is condemning of non-India in general. At least according to the subtitles I had, he doesn't even explicitly, excessively blame the west for seducing Indians away from their core values, though he is very fond of letting his camera point at signs of sex and skin, and I almost wonder if this film could be set basically anywhere other than India and make the same points. The two non-Indians who feature in the story are completely won over by "Indian values" (again, as defined by Manoj Kumar), so much so that they make sacrifices on par with those of any good masala side characters. 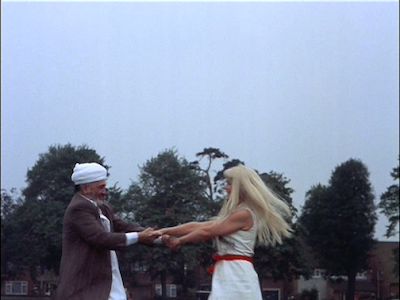 Manoj also admits that Indians in India can also make very bad choices, embodied by Pran's very wrong wrong-doing at the beginning of the film.

Where I get exasperated with this film is Manoj's insistence that family is worth holding on to no matter what truly terrible things people do. "The husband is god" makes me see red at the best of times, but in this case the husband ran away five years ago after fathering a child he's never met, and yet still the wife's father (a nevertheless adorable Om Prakash) thinks he is worth hunting down across the globe and begging to return. The idea that such a person should be in your daughter's and grandson's lives at all is maddening, let alone putting your own resources and dignity on the line to retrieve him "home," even after you know he's been unfaithful. Of course, Manmohan Desai seems to be saying the same damn thing in Suhaag years later, so I shouldn't be surprised. Ashok Kumar is wildly under-taxed as the literal and figurative grandfather who suffers no end for what he thinks is right, even on behalf of people who have demonstrated themselves completely uninterested in and not worth any of your energy.

I'm also irritated—and a zillion percent not surprised—that he wordlessly judges the skin show by women in the UK by letting his camera linger on miniskirts and bare legs, even pointing it down shirts and up skirts. I call bullsh*t on that exploitation technique and give him a very hearty eyeroll. 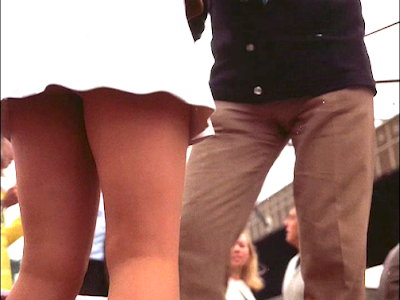 My other problem with this is some of the characterization of the UK-bred Indians is that they look and act basically like in-India Indian characters in countless other films. Prem Chopra is no more disgusting here than he is anywhere else 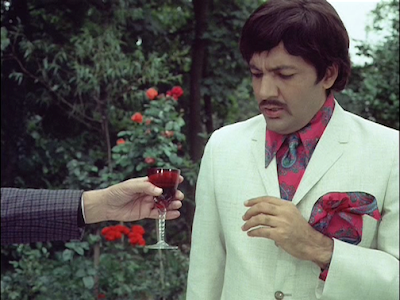 and Saira Banu's Preeti is basically a channeling of an item-girl aesthetic into a pea brain. She's as simplistic and, well, dumb as any thinly-sketched seedhi-saadhi village belle. Frankly I think it says far more about the hero of this film that this is the woman he agrees to marry (I'm not at all convinced he actually loves her) than it does about a girl born and bred in the west acting like a girl born and bred in the west with parents who want nothing to do with their Indian homeland. Again, as is no surprise, Bharat quietly assumes that India will work its wonders on the foreigner, and he is of course correct. No more smug than many other film heroes, I suppose, but almost insidious in its unspoken superiority. To his credit as a filmmaker and presenter of values, Preeti is never overtly pressured to change her ways and stay in India (and we never see Indian men along the street or in the village ogling her bare legs in miniskirts, which is the most laughable thing in the whole movie, but of course in Bharat's India all women are probably venerated as goddesses blah blah blah)—though there is plenty of unspoken dislike of her habits, particularly smoking—and there is in fact language (at least in the subtitles) about "Preeti chooses ____," which I truly respect. 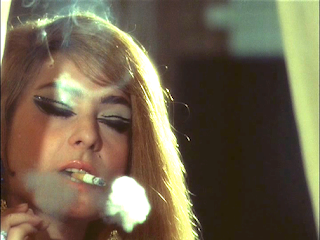