[I keep reading that title as Bhanu Goenda Johar Assistant, and as we all know, Karan Johar is the  assistant to no one.]

In addition to comedy so often not translating very well due to various challenges to or impossibilities of culture-to-culture of communication, especially through the filter of inexpressive subtitles, typically I find Indian comedies unbearably juvenile, loud, and forced. But when a top advisor on Bengali cinema recommended this film to me, I realized I needed to reconsider that, since almost all the Indian comedies I've seen are Hindi and made since 1990, and thus the traits I dread may not exist at all in older Bengali ones. Plus, said advisor's track record is excellent, having previously directed me to Bhooter Bhobishyot, which I liked very much.

To my naive eyes, this movie is not actually about Bhanu and Jahar, who flounder around trying to track down a runaway young woman from Delhi to collect a reward while also dodging their landlord's demand for back rent, as much as it is about that woman (Nupur) and the fellow (Anjan) who gives her shelter and their adventures while (very easily) staying a step ahead of Bhanu and Jahar. But that might just be because their romance is so cute that my focus was compelled in its direction. As for the question of comedy, this is more of a tee-hee than LOL type of movie, which is perfectly fine by me. In particular, I liked Nupur and Anjan's exchange of gentle one-liners, the kind of thing that people like me do when they are slightly nervous around a new person and then realize "Oh fudge, I'm actually more fond of this person than I'm ready to admit! Time to double my efforts at being a sparkling wit." As their attachment intensifies and they relax around each other, the zip in their repartee escalates. By the end of the film they're cracking each other up, which in my opinion is exactly as a romance should be.
Anjan is a little sassy from the get-go; he's a successful singer who gets mobbed by women after his concerts, so putting up a runaway in his bachelor pad for a few days is apparently no big deal. There's an attractive nonchalance to Subhendu Chatterjee's* performance, draping his lanky limbs over the furniture and rolling his eyes. 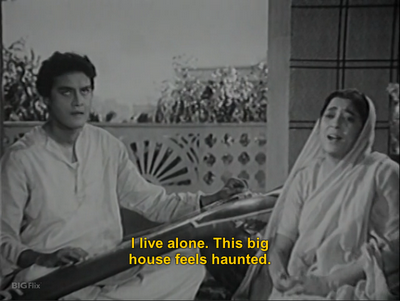 [Aside: the smoking, OMG the smoking. Do urbane gentlemen smoke this much in Hindi films of similar vintage and I just don't notice anymore?] Early on, as Nupur explains that she fled home because she didn't want to marry her father's choice of fiancé, Anjan stops her narrative to ask why she was afraid of this guy. "What was your groom like? African, Mongolian?" "Bengali," she says. "Bengali? Why were you afraid, then?" And once she's more comfortable with him, and they've worked out a cover story for why she's staying at his place, Nupur relaxes enough to indulge in love songs (one of which he overhears) and banter with him about why stardom has taught him to fear women.

Lest you think I have no patience for the titular comedy uncles**, I actually enjoyed them too. I think I could have scripted their action as well as the actual screenwriters did, but when Bhanu forces Jahar on to a stage to inspect whether the lead dancer is Nupur (and of course it is, because of course she's a good enough singer and dancer to just join one of Anjan's stage shows) and he flails all around in a silly outfit, I caught myself LOLing.
I feel about these two characters and actors the way I generally feel about Rajendranath's characters and performances, which is that if filmmakers need to have middle-aged men bumbling through their movie adding little, if anything, to the plot, then characterizations like these offer an acceptable compromise. Of course, Bhanu and Jahar are far more integral to this story than most comedy uncles, so they have more relevant things to do, which can be an effective way to make both characters and actors more fun to watch. The story cuts back and forth between their pursuit and Anjan and Nupur's flight, so there's never a chance to get really sick of them. Bhanu and Jahar also provide a (very loose) reason to show some decor that any masala lair would be proud of. For reasons I didn't catch, their office is decorated with skulls and skeletons and other creepy things.

This doesn't matter to the plot at all, but for someone with my 70s masala sensibilities, it is certainly a very welcome way to start a film. They also use disguises in aid of their sleuthing, leading to some silliness with an unreliable fake wig and mustache. 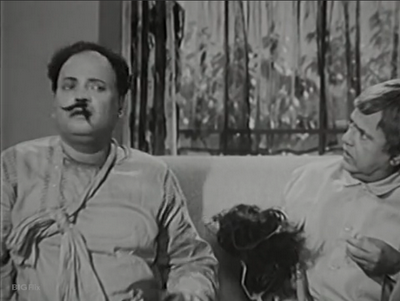 And speaking of, just in time for the #MouchoPrema filmi mustache festival on twitter (last week of November  [Movember]), our heroine gets into the act.

The pacing of the story is also really pleasing. As mentioned, Nupur and Anjan's romance builds nicely, and the film also has an actual conclusion with all the important players, and it's well after the romantic leads are united, unlike so many 70s Hindi films that just stop, having the whole cast stand in a line facing the camera as a substitute for writing anything significant deriving from the story. None of it is particularly significant, but that suits the film's breeziness. Anything more dramatic or pronouncement-laden would be way too much. Add in some appropriate music and performers who know what they're doing and seem to like doing it, and the effect is very nice indeed. Bhanu Goenda Jahar Assistant, with its consistent, amiable humor, is not quite, say, His Girl Friday level of sparkling chemistry and zinging dialogue (at least not in the subtitles), but it's cute, funny, and satisfying. In fact, it's much more realistic, which is not a trait I require but is fun to experience now and then.

American pals, you can watch Bhanu Goenda Jahar Assistant on Hulu with subtitles. It's also on BIGFlix.

* That's the father of Bob "Nomoskar" Biswas from Kahaani, for those of you similarly new to Bengali cinema.
** Term courtesy of Temple.
Labels: Bengali thoughts on movies

sapera said…
eh, i'm ambivalent about bhanu-jahar. they were obviously hugely inspired by laurel and hardy (and resembled them more when bhanu was younger and sylph-like). but it's like jerry lewis and dean martin, you either like them or hate them. i've never liked their movies. it's not lowbrow stupid enough to be interesting, not smart enough to merit analysis.

the skeletons and spooky stuff decor for example is obviously indicative of the fact that they are naive hacks. that is actually meant to inspire a laugh track, and it's too deliberate and hamfisted.
November 24, 2012 4:11 PM

Beth Loves Bollywood said…
Do you know, I'm not sure I've ever seen a whole Laurel and Hardy film!? If I have, it was when I was a kid and I have basically no impression of them now at all. And UGH Jerry Lewis. UUUUUGH. :) I liked the part of this film that focused on the romance more than the detectives, I admit, but it was all fun enough.
November 24, 2012 7:10 PM

sapera said…
yes that's exactly the reaction i am conditioned to have to bhanu-jahar as well ugh! :) they're less the awesome physical comedy of laurel-hardy and more the unfunny slapstick of jerry lewis :)

Share Chuattor has been recommended by several people. You have no idea how many DVDs I am going to buy in Kolkata in a few months. :D
November 25, 2012 1:36 PM

Aparna said…
I loved this movie. A nattily dressed Shubhendu was one of my teenage crushes (yes I do know that he was way older than I) other than Soumitra Chatterjee.
About smoking: For a long time, as I grew up in my home state, West Bengal, I thought all guys smoked, except my father. It was (not sure if it still is) very common for bengalis to smoke as compared to any other community. I have seen Soumitra smoke in a lot of movies, probably never Uttam Kumar. Hell, even Ray's own creation, Detective Pradosh C Mitter, known as Feluda, is known by his pack of Charminars.
November 30, 2012 5:22 PM

Beth Loves Bollywood said…
Shubehendu would make an excellent film crush! Re: the smoking, I've heard that from a number of people - and I'm trying to keep an eye out for it in Hindi films of the same era, just for comparison. And now beloved Soumitra has cancer! NOOOOOO.

Unknown said…
I am watchng the movie rite now! I m loving it. Special thanks for mentioning that Subhendu Chatterjee is the father of Saswata Chaterjee!! I discovered a new fact!! ;)
April 06, 2014 6:49 AM