It's hard to know what to say about such a colossal failure. There is absolutely nothing done right or well in this film. If Rahul Dev is your most recognizable cast member, if the hero is backed by tracks of a baby crying, if Shakti Kapoor is playing a good-guy police officer, if the best thing about your project is the excessive Michael Jackson tribute, if your title song is called "Why not [hero's name]?", leaving the door wide open for us to point out the zillion reasons why not, THEN YOU ARE DEFINITELY DOING IT WRONG. According to imdb, neither the director, producers, nor writer has any credits to their name since this film came out.

Was this all a joke—a massive, industry-wide joke, perhaps masterminded by Mithun for all the nasty things people have said about some of his films over the decades? I find myself almost a little concerned for Mimoh. Why would you do this? WHY? It made you look an absolute fool.

Here are a few of the best Mimohments from the film. 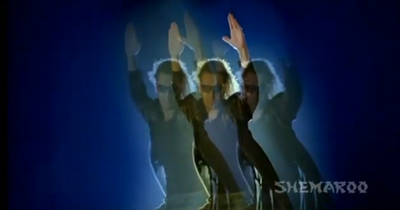 In the aforementioned title song, someone decided Mimoh should dance in front of a big, back-lit fan. You know, just like Hrithik Roshan did in Dhoom 2. DO NOT COMPARE YOURSELF TO HRITHIK ROSHAN, EVEN IF YOUR DAD IS A MUCH BIGGER STAR THAN HIS WAS. It will only end in heartache. I actually thought Mimoh's dancing was the least awful thing about Jimmy, but he's no Hrithik. And speaking of, is it Hirthik's, or perhaps Salman's, influence (fault, if I'm feeling less charitable) that so many baby heroes have this notion that if they have huge muscles they are somehow automatically watchable in a lead role? I'm surprised this movie didn't kill that idea dead in the water more than four years ago. 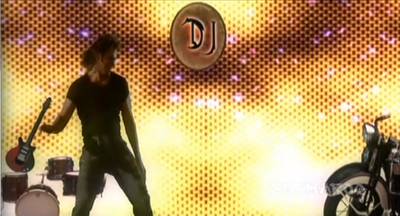 The harder the movie tries to insist Jimmy is cool, the more certain we are that he is pathetic and ridiculous by every stretch of the imagination. This image is from the title song again, where we see that Jimmy has, among other accoutrements unveiled later like lots of too-tight Armani shirts, at least two classic phallic symbols, the drum kit that should be gathering dust in his parents' basement (oh but wait, his dad is dead, I think? Of course. Who cares), and a logo whose super-angry slashy lettering isn't even properly aligned. 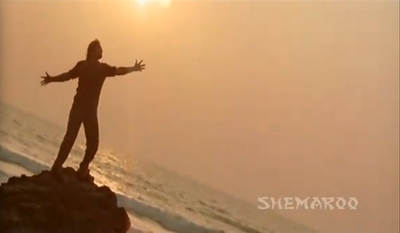 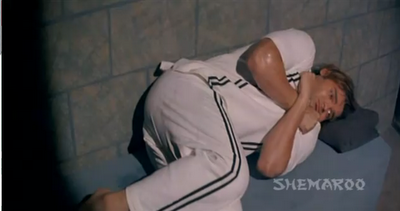 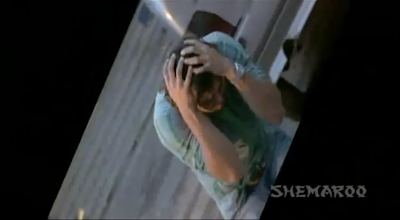 Just look at the
Mimohting! Love! Fear (in India's cleanest prison cell)! Brain tumor! Of course, we can't give all the credit to the acting; someone decided that "I have a month to live?!?!?!?!?!!?!?!!!!!" should be reinforced by spinning the camera around. The film's approach to the action sequences is perhaps best captured by the image at the top of this post; I bet you can hear Mimoh's battle cry just from looking at the expression on his face, as well as discern the incredible inconsistencies between the blows that don't even register and the ones that cause instant toppling over, bone-cracking, head-snapping, and possibly dismemberment. I swear I saw Mimoh hold up someone's severed arm in a prison fight, but I'm definitely not going back to check. 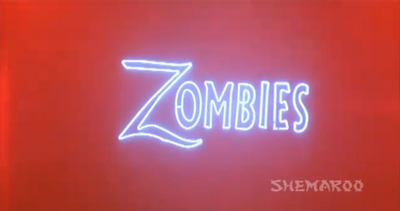 It's too bad the name of this nightclub doesn't echo thematically into the song set there—and you can't even really make jokes about Mimoh's acting being zombie-like because his problem is much more misdirected and strangely applied effort rather than phoning it in—but the song is its own special kind of treat. Behold. And don't miss the end, which is punctuated with Mimoh throwing himself through the air, a stunt I've come to think of as his signature move.

While watching Jimmy, I started to wonder where I'd place it on my list of most horrible Hindi films. Top ten, definitely, but is it worse than Shaitani Dracula or Deshdrohi? Simply as a film on its own, no, but as a thing that was deliberately created, marketed, and released into the wild, yes, absolutely. And here's why: those other two films are the work of  insanely deluded auteurs, for lack of a better word. Just like The Room, they are vanity projects imploding at epic proportions. There was clearly no one else with any influence or power to stop Harinam Singh or Kamal R. Khan from their trainwrecks. And maybe more pointedly, no one had any reason or interest to do so either. What's it to anyone else if they demonstrate their ineptitude on a lackluster scale?

But with Jimmy, surely someone was trying to make this work.Why would you bother to launch a non-chocolate-hero industry son who isn't easily, obviously, charmingly star-y (like Shahid, Hrithik, Imraan, Ranbir, though of course he's a special case) if you don't at least put some effort into it?  If this is a vanity project, it's one that involves a lot of other people and, as far as I can tell form the credits and imdb, not the one person we would most assume would have the most invested in this and thus be tinkering and meddling. Where is Mithun's huge career in all of this? Side note: somewhere I read the very funny idea that perhaps Jimmy is a deliberately bad homage to Mithun's B movies, a theory that gains serious traction in any of the action sequences. As much as I would love to see such a film, this clearly isn't it. This is clearly earnest and Mimoh-centric. At a nuts and bolts level, the credits indicate that there was a proper team working on this and actual experienced people were involved. Director Raj N. Sippy did Satte Pe Satta and Inkaar; yes, they were long ago, but still. Writer Ranbir Pushp...wel, okay, I haven't seen any of his films, and I have heard nothing but howls of laughter about Return of Jewel Thief, but he's written over two dozen movies so should at least understand a bit about pacing and good plot twists. The music director, the sound crew, the editor, the cinematographer have all worked on many other films. But somehow Jimmy seems for all the world like someone's scrapped first project made in 1992. It's absolutely amateurish—loud, boring, really stupid plot, bizarre cast—for no reason at all.

But please don't think I mean that Jimmy is a sad waste of interesting potential. Definitely not. There is nothing good about it in either concept or execution. However, much, much good can be had of its consumption, as I hope the following links for further reading will suggest, because I just know I am not conveying the hilarity of this disaster

Based on my own experience and reports from friends, Jimmy certainly holds entertainment value if viewed (or read about or discussed) in the proper setting and company. See the magic in Mimohtion at Shemaroo's youtube channel here. But heed my warning, friends: consider "the more, the merrier" as instructions for viewing, not merely a friendly invitation. GET  MIMOHTIVATED!

Also, who's going to leave me more bad Mimoh puns in the comments? C'mon, you Mimoh you want to.
Labels: avoid yaar - and other very bad endeavors thoughts on movies

rgb said…
I thought there would be enough indication on the internet about what you were getting into that the hashtag might have been Jimmyjaja!
October 09, 2012 10:13 PM