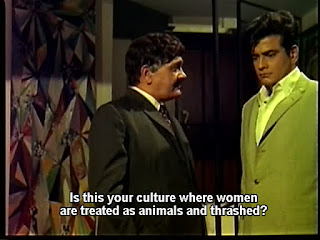 Thankfully this one stars Jeetendra instead of Shashi as Amar, its insufferable hero, a hypocritical holier-than-thou cultural-purity mama's boy. Amar tries to help his friend Prakash (Vinod Khanna) woo  Neeta (Babita), the very modern, educated, and half-English young woman playing opposite him in the Ramlila. Perhaps because she knows how to read 70s film costumes, 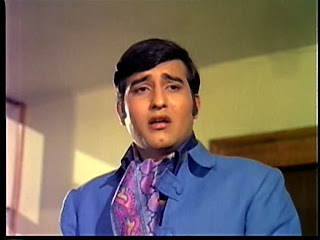 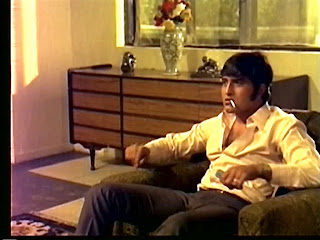 Neeta realizes Prakash is a bad seed and promptly falls for Amar, nicely demonstrated by her dramatics-inspired hallucination. 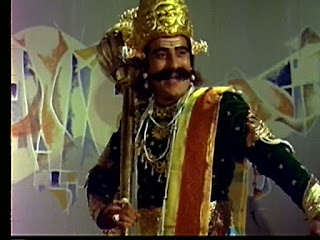 Despite the objections of her father, the Major (Om Prakash) and the attempted interference of Prakash, Neeta and Amar get married. It's all cute for a song or two, but Neeta is appalled by the locals in Amar's hometown and Amar cannot handle Neeta and her friends wanting to go to nightclubs and dance and have parties—not even the children of France, England, and America behave so indecently, he cries!

He eventually smacks her across the face at her own birthday party, and she actually walks out on him, returning to her parents' house. When he chases after her there, the Major gives him an earful: "You slapped her in public and now you want to apologize in private? You preached your culture and civility. Is this your culture where women are treated as animals and thrashed?" "I don't want to discuss the reasons for bringing matters to this state," Amar replies. Yeah, I bet you don't, you ass. "It's a life and death partnership," he says, defending his right to claim his wife. The Major counters "So you're arranging for her death? She doesn't want to live with a mannerless, uncultured man like you!" When Amar makes a break for the stairs to her bedroom, Neeta appears on the landing and says "First I misunderstood [you]. But now I know the truth. You slapped my heart, not my face." [transcribed from subtitles] The Major visits his lawyer to help arrange their divorce.

"Could it be?" you ask. A patriarch defending his daughter against her conservative husband even to the point of actual divorce? Well it would have been, except then Nirupa Roy as Amar's mother shows up.
As in Abhinetri, the husband asks the wife he's driven away to move in with him so his mother thinks all is well when she come to visit; in this story, the signed divorce papers serve as bait to lure Neeta into a fifteen-day stint at Amar's house pretending everything is hunky dory. The movie more or less supports Neeta until the very end, but of course the influence of Nirupa cannot be withstood, and by the end of the film Neeta is falling at Amar's feet at a train station (hello, shades of Jab Jab Phool Khile).

What makes Ek Hasina Do Diwane (and what an irrelevant title that is, by the way) interesting is that in addition to its almost clinical treatment of the situation, neither praising Amar or smacking down Neeta, Maa supports the strength of women in her own particular ways. Without giving away the details, I'll say that Maa participates in traditions that put a lot of resources and power into Neeta's hands, and she also makes it clear that she thinks her son is an idiot who needs all the guidance from Neeta that he can get. Here she is offering advice on men in general. 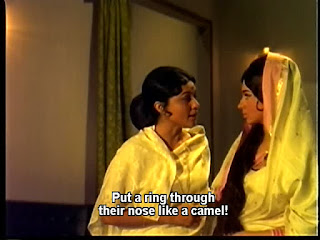 She also tells her son that she has spoiled him but she won't let him treat his wife badly. It's not clear to me whether Maa knows all that Amar has done, not just the physical violence but also his  condescending and aggressively divisive and arrogant attitudes, though somehow I sense that she's figured it out. Amar's Maa is a more involved mother in Neeta's life than her own mother (who is said to be English, though I cannot tell if the actress is). Other than trying to calm down the Major when he's threatening Amar with a gun, Neeta's mom doesn't do very much. Amar's Maa really does provide her with some useful tools for her adult married life, and not of the "just submit and it'll all be fine" variety, either.

Maa also has a big effect on the Major, who sees in her his beloved but deceased sister, so much that he starts crying the first time he meets her. I didn't catch whether the Major flat out tells Neeta that she should stay with any family that Maa has any involvement in, and I think the film implies that Neeta's change of heart towards Amar is of her own volition in reaction to the picture of adult relationships that Maa paints.

I, of course, think the Major's initial reaction to the Neeta-Amar pairing is correct, that they are just too different for this relationship to be sustained without a huge amount of work—and let's be honest, it's Neeta who will do all the changing, perhaps because she's the woman, perhaps because she's less traditional, or maybe just because her husband is too childish to do the work required for significant alteration or compromise.

The highlight of the film, especially if you've already seen Abhinetri (or Jab Jab Phool Khile, for that matter), is a an angry but very fab dance by Amar, who flies into a rage after his friends tease him at a nightclub about singing hymns instead of dancing to the groovy tunes. It's a very modern dance of a very deeply held conservativism. I don't know what Amar thinks he's proving, but I do know that watching Jeetendra do these moves, among backup dancers in these clothes, in this superb nightclub set, is a joy. He twists, shimmies, and flings his partner over his head.

My DVD does not have subtitles on the songs, so I don't know what he's singing. I almost hope it's a condemnation of their decadent western ways because the hypocrisy (or "juxtaposition," if I'm being nice, which I am not inclined to be since it's Amar we're discussing) of those words set to this music and dance would be astounding. A comment on the late, great Briyanshu blog notes that "Vinod Khanna lighting his cigarette was looking at him as if saying 'You are a disgrace to all men!'" which cracks me up, because Prakash has very little affection for his friend at this point and mostly wants to get him out of the picture so he can have Neeta for himself.

So in the end, what is the movie's overall statement about traditionalism, religion, commitment, and mistakes? I really don't know. I have to wonder if the screenwriters wanted to make a bolder version of Abhinetri but chickened out under pressure to be acceptable to audiences? Is it a critique of men like Amar (at least movie versions of them) with a resignation to the reality of their continued power? Amar gets what he wants, but he isn't praised. And who actually has the power, the influence, in this story, anyway? It really doesn't seem to be any of the individual characters; Maa is persuasive, but perhaps as much by example as by what she actually says in words. She doesn't argue any points that are overtly in line with her son's more bluntly stated and not at all backed-up-by-behavior morals. For example, he yadda-yaddas on about religion but Maa and Neeta are the people we see praying and singing hymns, not Amar. The institution of marriage seems to have as much sway as any of the people, almost as an invisible force that no one directly espouses very often but the young couple is wrangled towards it all the same, regardless of their differences and, in Amar's case, cruel behavior. Or maybe this is an attempt—and a successful one, I think—to create a more complex version of a movie maa? What a noble experiment that could be.

The final result of Ek Hasina Do Diwane is the same as countless other films, but the path to it is quite different. Watch it for the mostly modern father who accepts the mistake his daughter has made and loves and protects her anyway, for the mother who wants to bond with her daughter-in-law, and satisfaction of snarling at hypocritcial Amar. Oh, and for the sanctimonious twist. That is very special indeed.

Sayak said…
So just to clue you in on the song, he's basically saying "What kind of song and dance is this? It looks like a bunch of mad people are trying to pass off an insane asylum as a party." He then goes on to mock not just western dance, but pretty much the whole of western culture, does some not so subtle fat-shaming, tells one dude he's too old to dance and then comes over all weepy about the sacred love of Radha and Krishna and the tragic decline of Indian traditions. Give this guys a few more years and you'll find him standing outside bars waiting for women to walk out so that he can slap them. I haven't seen the film, but what possible scenario explains Neeta's attraction to this asshole in the first instance? This six and a half minute song was enough to put me off the whole movie. You might be right about the nuanced approach to the Maa character, but I have a feeling I'd spend the length of the movie gesticulating wildly at the screen shouting "Why? For god's sake, WHY?!"
November 01, 2012 12:48 PM