Sweet Bindu on a biscuit—you know, like "Christ on a cracker!" but filmier!— this is a terrible, terrible movie. Its only substantial benefits are: 1) that it dresses Vinod Khanna like a nerdy professor (and, to my surprise, gives him top billing) 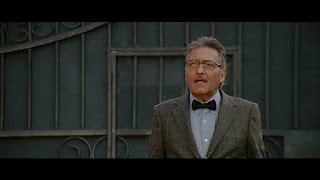 and 2) it has an excellent villain lair, which I plan to discuss in greater detail in a later post. [SPOILER] However, when Vinod is gunned down in the middle of the film, his death scene is embarrassing. I have every faith in him as a thespian but he was either really out to lunch in that scene or playing it for laughs in a way that had so little to do with anything else that it fell flat on its face. [END SPOILER]

Admittedly, it is at times howlariously bad, and therefore it might have some comedic so-bad-it's-good value at a slumber party or similarly jolly gathering if everyone is loopy from Doritos or box wine or crack. But mostly it is just plain bad. Because this movie is not worth any brainpower devoted to constructing sentences about it, here's my quick list of why it sucks.
Avoid, yaar! AVOID LIKE THE WIND!

Oh PS, does anyone else find Sikander Kher oddly magnetic, even though he hardly had anything to do? Is it the curls?

Niya said…
Yesss on Sikander Kher, for me it's the eyes and the name (Sikander!).

And also yes on Sonam, I kind of enjoyed this film, but the song where Sonam tries to seduce the villain is SCARY! Her lack of talent shows and her red lipstick isn't working for her either.
July 06, 2012 7:12 AM

Roopa Pavan said…
It was a good experience to read the articles and contents on this site. http://www.Gurgaonflowerplaza.com
July 09, 2012 12:15 PM

eatpraylovemovies said…
Great post as always! I so agree on Sonam. She's just been lucky all this while to get to work with all the big names in the industry....
July 10, 2012 5:05 AM