If you have no idea what I'm talking about, see the real Sassy Gay Friend on the Second City Network!)

Meet Pooja from Lamhe. She is in love with Viren. 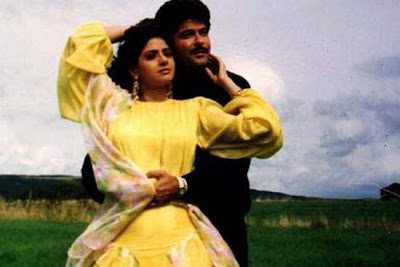 Viren is old enough to be her father and was, in fact, in love with her mother—and still is, almost 20 years later. 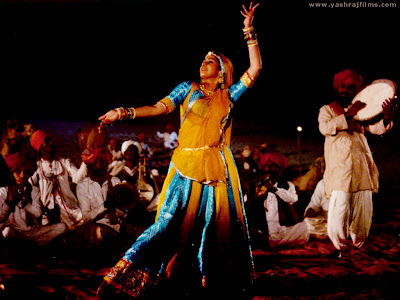 This fate could've been avoided if she'd had a Sassy Gay Friend—or any competent adults around her at all, really!
POOJA (lying on her bed, cuddling a giant teddy bear)
Sigh.

SASSY GAY FRIEND
Flounces into her room in full maharaja getup,
adjusting his turban before perching delicately on the edge of her bed while admiring the curly toes on his shoes.
Pooja, doll, why are you so hung up on this guy? Viren is a miserable SOB who has smiled exactly once post the death of his true love—who, I might add, was YOUR MOTHER.

SGF (continuing)
With a dead woman.

SGF (working up a full head of steam)
Who never loved him.

SGF (visibly irritated)
Who is YOUR MOTHER.

POOJA
I did try to point that out to him.

SGF (snatching away her teddy bear)
And yet you insist on piling on the cray-cray. That's right, I've seen your scrapbook, missy! He's even kind of your...I don't know what, patron? benefactor? guardian? I know it's the done thing in novels and all, but, girl, this is 1991. Ew!

POOJA
But he was hardly ever around! It's Dai Jaa who raised me!

SGF
Who also raised him, I might add. That kinda makes him your brother, n'est-ce pas?

SGF (making a dismissive gesture)
Let's not even go there. One note of incestuous stench is more than enough, thank you very much. So to recap the pragmatics, he voluntarily shouldered the responsibility of raising you and then weaseled out of it in all but the most perfunctory of ways. In fact, he seems to avoid you deliberately.

POOJA
He's such an important businessman.

SGF (throwing the teddy bear at her)
Oh don't even! Don't make excuses for this dead-inside, delusional Splenda-daddy! He's even told you he's in love with a dead woman, YOUR MOTHER. This is what we call a full set of matching Louis Vuitton steamer trunks of baggage.

SGF
Could he be any more "no means no"? It's like you're just waiting to be hit in the face with the evidence.

Hops off the bed to give Pooja the full view of his hand-on-hip stance of disbelief.
OH WAIT, HE DID THAT. Literally!

SGF
Starts to walk away from Pooja
but is momentarily distracted by his many rings.
Oooh, this job has the best accessories. J'adore!
Remembers the task at hand and turns back to Pooja.
Right. That's it. He ignores you, smacks you, and loves your mother? I am so done with you. May you get what you wish for, you pathetic little freak.
To audience.
She really is a stupid bitch.

Flips the end of his silk shawl over his shoulder.
Seriously, not to be all girl who cried wolf, but she might just be the stupidest bitch I've ever met, and I've known quite a few, let me tell you.
Labels: Sassy Gay Friend

Unknown said…
Another very amusing read as always, with just one slight caveat - this Lamhe we're talking about, and as SGF's reaction so clearly shows, mocking the insane ickiness in this film is like shooting fish in a barrel, only much, much easier. :)
July 11, 2012 2:35 PM

Kanan said…
Could this be any funnier? LOL

Anonymous said…
I loved Lamhe :-) listen, there are worse situations than to love a Rajkumar who seems out of reach, but feels reluctantly attracted to you and fights it all the way. Viren is just waiting for someone to love, will spoil her rotten, and, she is a Rajkumari to boot (SGF got it wrong this time!) Way to go girl! I am a sucker 4 these type of stories- the best Mills & Boon style. Probably why i like Anamika (the one with Dino Morea) so much. It's not so easy to marry a Prince, so when you get the chance, you take it. After all, she was raised in a Rajkumar's household, used to the very best of everything (did you see her ornaments and clothes?!) so, I ask u, who else was she going to marry? Love, Sonam
August 04, 2012 12:59 AM

Beth Loves Bollywood said…
Hi Sonam - There are a lot of people who love Lamhe, I'm certainly aware, so clearly it works for lots of people. :) I think this story is beyond ridiculous and foolish, and I don't for a minute buy that Viren has been attracted to her until the very end of the story when for the sake of happy endings the script does a 180 in a very psychologically messed up way. But to each their own! :)
August 05, 2012 2:21 PM

Vain Desi said…
I HAVE to tell you how this movie plagued my childhood. My name is Pallavi and my older sister's name is Pooja. I hated this movie even before I watched it for all the people who called me Pallo.

And when I finally did watch it.. my reaction pretty much boiled down to EWWW.

Beth Loves Bollywood said…
Hi Vain Desi - I'm always happy to meet people who also don't like this film. There aren't very many of us, so we need to stick together. :)
September 16, 2013 9:13 PM

Nikina Maqsood said…
Just been watching Lamhe for the first time. Way late to the game, I know. It's... let's just say it's misguided. Also screamingly early 90s. Those sweaters! Anil Kapoor without a moustache is just not right. Not right at all.

I'm not normally one to pick holes in Bollywood continuity or logic, but the bit where Puja dresses up as a bride - whose clothes are they? Whose jewellery? She can't have brought all of that with her from India, surely? Certainly not the clothes, as she had previously shown absolutely no signs of being the sort of Indian girl who dresses that way.