[Housekeeping note: Blogger has a new post editor that makes it very difficult to arrange images the way I usually do, so I think from here out posts are going to look a little different.] 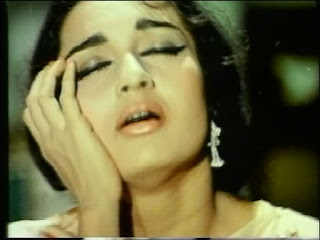 Even after watching Do Badan twice, I'm not sure why I don't like it...or even what's wrong with it. Asha Parekh is probably my favorite heroine of the era; 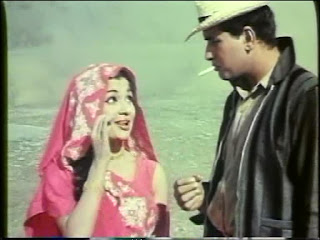 Pran is orange-haired, selfish, and evil; 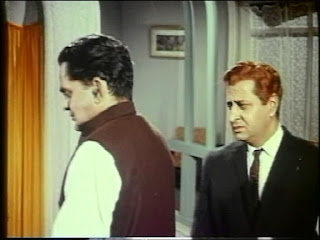 characters talk of duty, fate, social status, and the role of women; 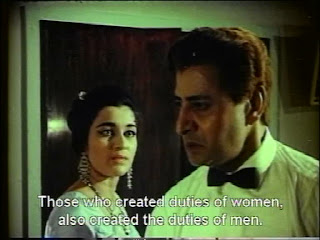 and there is occasional visual interest in lighting, angles, and interior decor. 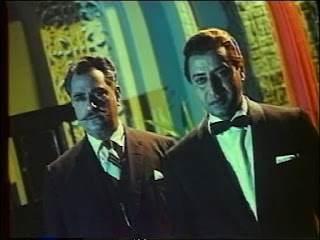 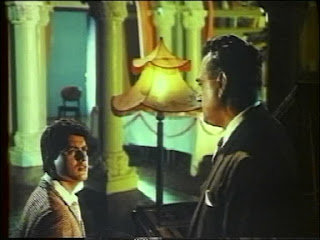 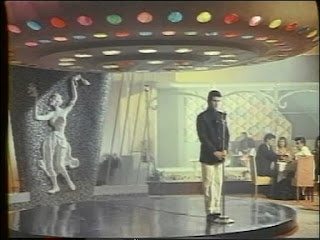 For starters, I might be falling into the camp of people who find Manoj Kumar irritating no matter what film he's in. This one is directed by Raj Khosla, whose Mera Gaon Mera Desh I loved, and it is not in the least patriotic. He has moments of genuine expression of a variety of appropriate emotions or states of being (optimism, distraction, despair), but I just don't find him pleasing or interesting to watch. His character here is an uphill battle, to be sure: tragic, full of resignation, and struck with filmi blindness. 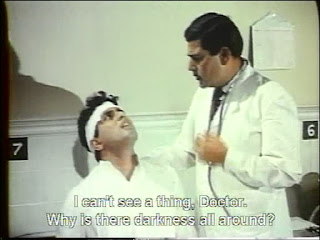 Long-suffering can be hard to sell, and he doesn't succeed. 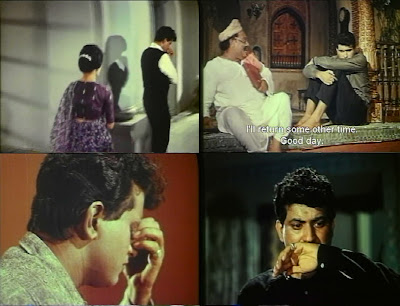 Really, though, the problem is the script by G. R. Kamath (with story by Masood Mashhadi), who also did Mera Gaon Mera Desh. I am not a person who seeks out films to provide "a good cry." There's no such thing in my book; crying makes me dehydrated, exhausted, and headache-y. After a solid meet-cute, the story of Do Badan is determined to wallow in misery. Hero, heroine, heroine's awful father, heroine's mildly helpful uncle (Manmohan Krishna), hero's sympathetic doctor (Simi Garewal), 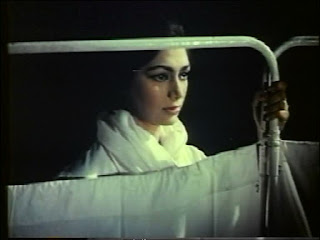 and even the villain all weep and wail over various wrongs and misfortunes. As I write this, I'm realizing that the risk of having a villain reform after it's too late to do anything to correct the problems already caused is that it just brings more sadness without any resolution or improvement for the people involved. In the case of Do Badan, the only people who can actually use what they've been through aren't the people we're supposed to care about. Nobody in this film gets what they deserve. Usually I am happy to see characters who learn and grow and change for the better, but, in this case, the powerless apology that came out of that knowledge did nothing for me. Apparently what I'm looking for is a villain to reform and do something useful and awesome, like blow up his own lair or turn himself in to the police or donate his eyes to the long-lost son he accidentally blinded. Here the villain realizes the error of his ways and then just stands around with everyone else being sad. How unsatisfying!

That's about all I have to say. If you're looking to Nahiiiiiiiiiiiiin! yourself into a frenzy over the injustice of the world, this film could probably fuel you for an hour or so. If, like me, you'd rather have an ending that is happy, or at least hopeful, look elsewhere.

On the other, Manoj Kumar, which is -100000. The man is a surefire sign for 'suffering' movies. I think the only non-melodramatic tragedy he's been in is the horror/mystery/thriller thing 'Woh Kaun Thi?'*

*(This isn't a recommendation per se. But it does have this rather striking poster: http://en.wikipedia.org/wiki/File:Woh_Kaun_Thi.jpg )

Still, that lighting is swell.

Beth Loves Bollywood said…
Batul - Very ghastly! Glad I am not alone on my dislike of MK.

Vishal - She might even be +2, but the math is still very much not in favor of this film. It's so MOPEY. How is Woh Kaun Thi? The poster, as you say, is AMAZING! Love the weird blue Sadhana and the giant cat and the letters tinged with red and the bat that appears to be vomiting up blood? Okay I love it all. Wow! Is that supposed to be Helen with the cigarette?
September 12, 2011 11:10 AM

Shalini said…
I'm a happy-endings person myself and while I couldn't care less about Manoj Kumar, I thought Asha P deserved to live happily ever after. No one wears dangling earrings and choker necklaces as well as she does.:-)

I *was* mildly impressed by Asha's character being allowed to continue to love/pine for Manoj even post-marriage...not that it did her any good.
September 12, 2011 1:04 PM

Temple said…
Beth I recommend Woh Kaun Thi as a reasonably good and atmospheric mystery/thriller - and it has the really lovely Tikiriki song featuring Helen (who plays a a character, not just the item girl) as a bonus.
September 13, 2011 4:46 AM

Ajay said…
Ask a celebrity anything you want - anything at all! Check out http://www.poochnemeinkyajaatahain.com/ and tweet away!
September 13, 2011 8:58 AM

Anonymous said…
Welcome to the expanding club of people who don't like Manoj Kumar in Hindi films. He always gives me this feeling of guiltiness, when I see him on the screen.
Most probably I have seen this films ages back, but can't recollect it. They showed a film with Manoj and Asha on DD ages ago with the Wimbledon final match. Whenever it was raining in Wimbledon, they would air the movie. It was a murder mystery of sorts and like films of this genre in the 60s the action starts in the later 3/4thof the film. The major part being filled boy meets girl, girl doesn't like boy, boy teases girl, girl takes revenge, girl regrets the revenge, they fall in love, boy takes girl to meet mother and then at last comes some action and till then it is quite entertaining with good songs and hilly locales. AND that film WAS entertaining, but I doubt if it was Do Badan. Was it?
September 13, 2011 10:29 AM

harveypam - Hee! Glad to know I'm in good company. The film you're describing sounds fun - is it possibly Sajan? It's definitely not this one, which even at its best points does not veer into "quite entertaining" territory, I'd say. Though it does have some nice hilly landscapes here and there :)
September 13, 2011 7:34 PM

Anonymous said…
First of all CONGRATULATIONS!!!!!!!!!!!!!
Glad to see that you will be writing for a print media. I hope you will keep us updated on that!

You are right about the film, it WAS Saajan. In fact, I can remember the title song 'Sajan, sajan, pukaru galiyon me' and also the hummable Mukesh-Lata duet 'Resham ki Dori'.
September 14, 2011 2:33 AM

Anonymous said…
The only film I've been able to bear him in was Gumnaam, and that's only because of all the other Goodness surrounding and overpowering him. I guess I am the only person who didn't like Woh Kaun Thi either :( I know I've seen this, but I seem to have blocked all memory of it, thank goodness.
September 16, 2011 8:33 AM