As promised, here is the text of Bikram Vohra's interview with Shashi Kapoor entitled "Shashi Kapoor: I'm playing a Class 'C' Stuntman," a photo from which is in my previous post of Shashi goodies from the 1975 Filmfares. 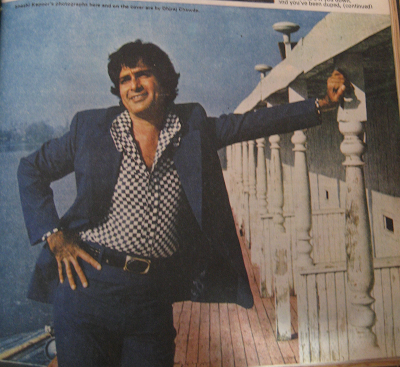 The way this piece ends makes me sad. Rusted ideals! I hope that Junoon and Kalyug turned that around and that by 1982 nobody thought to interview him about dreams that hadn't materialized, even if he wasn't pleased with his glorious, rich masala films like Kaala Patthar or even Raj Kapoor's Satyam Shivam Sundaram. And does it strike anyone else as an odd contrast in tone for the author of this piece saying run-of-the-mill popular films should make their participants sick to their stomachs while the rest of the magazine glorifies and promotes those very same films? Hmm. So much to learn from the archives!
Labels: house favorite: Shashi Kapoor