After the dismal Khel Mohabbat Ka, I was really wary to try another of the £1 bargain-bin wonders from my friend Celia in the UK. But curiosity won out - as it so often does when it comes to Bollywood films that I have reason to fear - so into the DVD player went Anokha Rishta, a slightly creepy 1986 take on Daddy Long Legs. Rajesh Khanna stars as Bob, the benefactor of an orphaned teenage girl, Mary (Sabiha). Once at college and away from the shelter of her Catholic orphanage, Mary falls in love with Bob without realizing who he is. 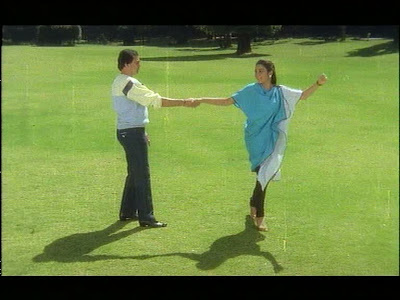 Karan Shah plays Will, a good-for-nothing playboy type who works for Rajesh and falls for Mary. 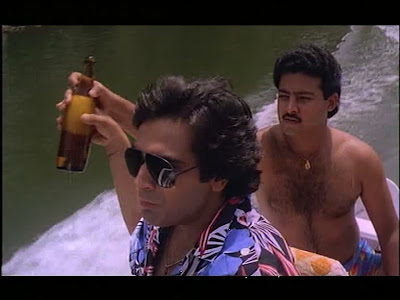 Smita Patil also appears as Dr. Padma Khanna, Bob's long-ago star-crossed love interest, and I'll tell you that if there is one thing I have now seen more than enough of in my life, it is fog-laced, soft-focus snuggling between Smita Patil and Rajesh Khanna. 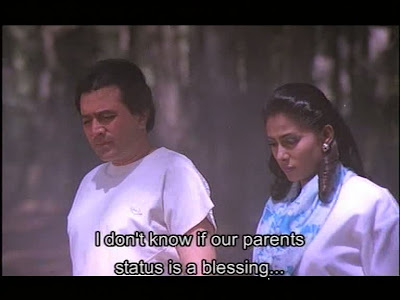 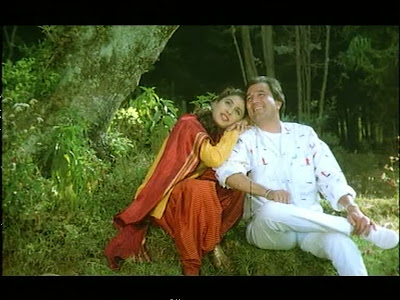 The reason I say "creepy" is that, in addition to Rajesh beginning to look plastic-y and occasionally orange (which may be what you get for £1), I could not shake the fear that Mary was going to turn out to be the illegitimate child of Bob and Padma and thus unknowingly be in love with her own father - and then Will would also turn out to be Bob's nephew (I was not clear on the relationship between Will and Bob - one of those cases of people calling each other "uncle" and "bhai" figuratively, I think) and thus be lusting after his cousin. Not an unreasonable fear, I think, given how often long-lost family members drop in out of the sky in Hindi films and how very, very wretched an orphan character is who does not find at least one relative by the end of their film. BLECH. Fortunately, my fears were for naught; if Mary's parentage is revealed, I missed it. So at least I can say for Anokha Rishta that it is free of incest. I have read that Sabiha later accused Rajesh of "lewd behavior" while on the sets, ratcheting that ick factor waaaaaaay back up in a much more serious way.

HOWEVER. There were many points during the first 110 minutes of this film that I almost wished there had been incest because at least that would have been INTERESTING. This movie is SO BORING. It kicks off with one of the most saccharine songs I have ever seen, "Chal Saheli," filled with literal bus-loads of orphans dancing on hilltops and never-ending choruses of "la la la." 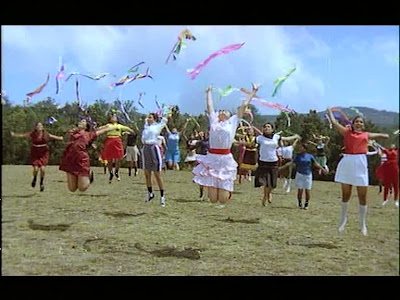 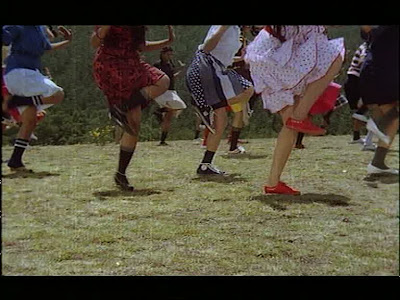 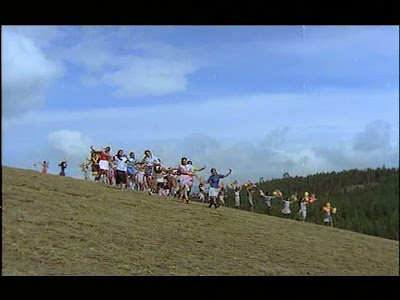 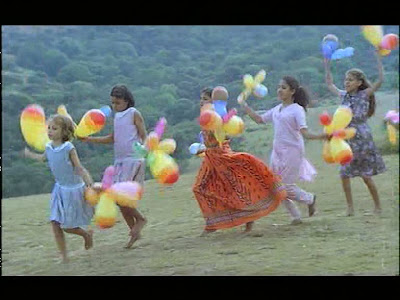 The hills are aliiiiiiiiive with the sounds of ooooooorphaaaaaaans!
But after that, it's basically a snore full of unlikable people getting themselves into untenable, foolish situations. Not until the final half hour is there anything worth discussing - and I can't talk about those things because doing so would spoil it! (But if you've seen this movie: OMG, can you believe that character did THAT? Crazy!) Before I mention a handful of small points with pictures, I will share that one mark of the movie having gone bonkers, and therefore getting much better, is that Bob has nightmares of Mary in habit. 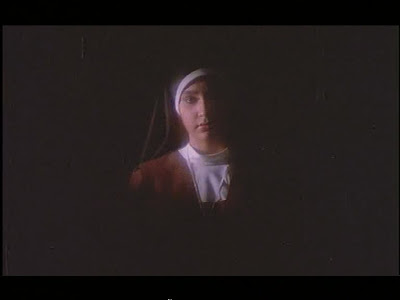 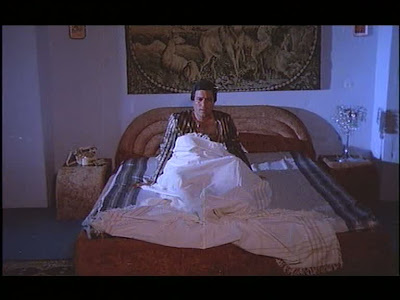 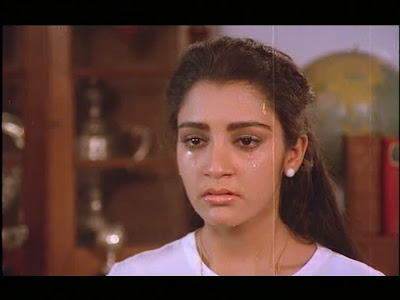 and makes me feel quite bad for her even though she's been nothing but whiny and stupid for the entire course of the film.

Anokha Rishta is one of those movies that frustrates me because I feel like I should find more to say about it than I have been able to despite mulling it over for a few days and having ingredients like a ton of Catholic imagery and references, daddy issues and a related delusional May-December romance, a hint of religious differences dooming a different romance, and Karan Shah apparently completely naked in a shower. Even the vaguely distressing appearance of the amazing Smita Patil slumming it in this mess just leaves me speechless. (Though I will say she is by far and away the best thing about the movie and I'm glad for her that her few scenes are relatively dignified.) Luckily for us, even in a bad film, a pound can buy you a few entertaining moments and screen caps. For example, Satish Shah (as Bob's colleague) has a funny track in which he and Will exchange angry words through voiceovers indicating unspoken internal dialgoues. Sometimes these include things like "How do you know what I'm thinking?" I am not usually a fan of his work but this comic side plot was done really well, never too much and never too stupid. This particular line made me giggle in light of Main Hoon Na. 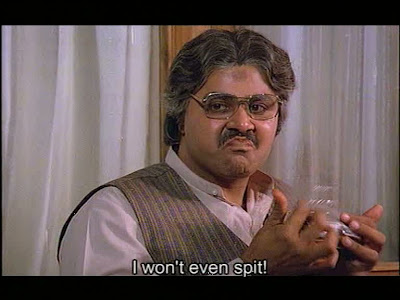 Mary's friend Sherry wears quite the white poofy party dress and heeled boots. I'm pretty sure I would have loved this outfit when I was 12 in 1986. 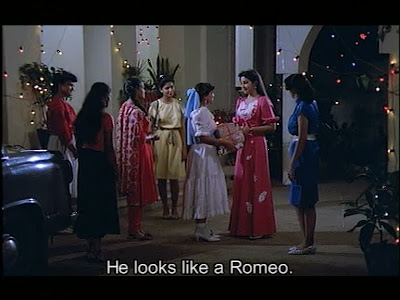 Will too has some snazzy 80s duds. 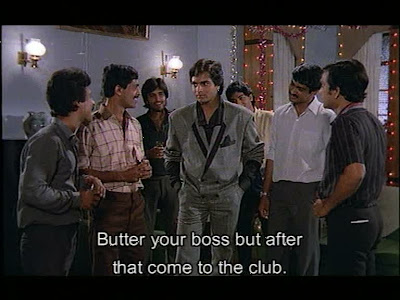 Bob...not so much. He has at least three sweatshirts with big writing on them, including a sleeveless one emblazoned with "CHICAGO" that appears in Mary's fantasy after she falls in love with him. 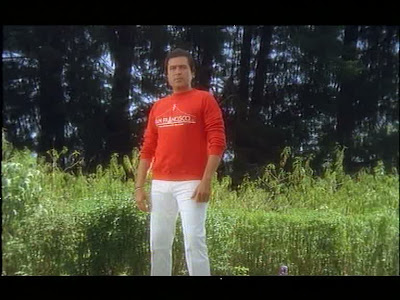 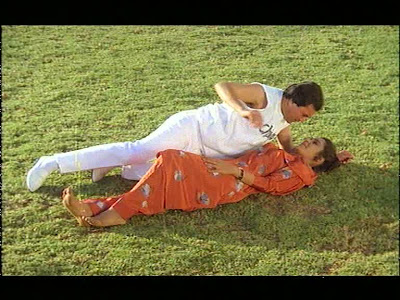 Given that this scene is completely imaginary, I wonder why she didn't dress him better? Why the white jeans, white socks, white loafers, and a sleeveless sweatshirt? Is that just what Rajesh Khanna wore to the set that day? Interestingly, he's nicely dressed in suits and kurtas in the business and home scenes; it's only in the couple-y moments that he takes on a Bill Cosby/Sylvester Stallone/Jeetendra look.

Totally Filmi has said she's interested in watching at this film along with Kanamarayathu, the Malayalam version that came before it (also by director I. V. Sasi). I'm looking forward to some good discussion at that point, especially if the Malayalm film turns out to have even the slightest bit more going for it than this one.
Labels: quid pro quo thoughts on movies

Banno said…
I think no one really went to watch this film especially after the Sabiha incident. Thank God for that, no, not for the S inc. but for not going to see the film. Rajesh Khanna as a do-gooder is like, painful, especially in a sleeveless T-shirt.
January 20, 2011 9:29 PM

Amaluu said…
I TOTALLY remember reading the Stardust article about the Rajesh Khanna - Sabihaa scandal! They gave EXPLICIT details about what happened -- quite shocking when I was little.

I notice that Mary appeared to have worn her nightie to Sherry's party.

Beth Loves Bollywood said…
Banno - Everyone was right to avoid it, I say! This brings my Rajesh Khanna film total to three (if you count Disco Dancer), so I know I have a lot to learn, but this one was no enticement.

Amaluu - Ooooh! Do you remember what she said happened? I'm morbidly curious, I think because she seems SO YOUNG in this film that there is not the faintest touch of sexuality about her - like, 9 years old, not the almost-a-woman vibe of older teeangers.

As for clothes, this is a parade of sad 80s things that have a touch of prairie about them - high necks and full skirts. I guess we can't trust convent girls to be tricked out in the very best spandex and off-the-shoulder. Hmph.

CheeC said…
Beth, the year that you were 12, I was 11, and had the great "good" fortune (cookie-gone-awry) to watch this... oh don't ask! Thankfully, the only scenes that willingly subject themselves to my conscious recall now seem to be that "Mary in habit" nightmare and "Mary in nightie" (great catch Amaluu, and LOL!) party pooping, but consider my subconscious singed (not from the HOTNESS that's a buck-naked Karan Shah though....how on earth did I miss that shower scene??? Damn you, Indian censor board, and thank you, YouTube.
January 22, 2011 6:16 PM

Shweta Mehrotra Gahlawat said…
I remember the stardust article too! a little too vividly tho- and am STILL too embarassed to repeat the details! Most of the article was an interview w/ Sabiha, where she accused both Rajesh and the director were both trying to molest Sabiha. Plus that scene which you have a screen cap of- apparently they both slapped Sabiha silly to make her cry. Sabiha was apparently present when her mom said all this, and merely chimed in to agree w/ her mom. Yikes!
January 25, 2011 5:03 PM

Beth Loves Bollywood said…
CheeC - You watched this! Wow! Good for you for blocking it out so effectively - I think your memory caught the best parts :)

Our friend Briyanshu can be counted on to upload important archival information. Always. :)

Hot Wallpaper said…
This comment has been removed by a blog administrator.
January 29, 2011 3:48 AM

Online Movies Megavideo said…
This comment has been removed by a blog administrator.
February 13, 2011 1:59 AM

Anuradha Warrier said…
Beth, going through your blog with a vengeance! :) Yes, the Malayalam original was much (*muc*) better than this one, not the least because Mammootty (Rajesh Khanna in the Hindi version) was so much more dignified, Kaanamarayathu was better scripted. Funny - considering it was by the same director. Maybe they changed the settings to suit Hindi sensibilities? The Malayalam original was a simple story about a young girl falling in love with her much-older benefactor and his conflict over his rising attraction to her. It was finely nuanced.
January 18, 2012 12:44 PM

Beth Loves Bollywood said…
Anuradha - Hee! There's a lot here to read, that's for sure. But I try to add lots of pictures to break it up. :) Fellow blogger Totally Filmi has told me a bit about the Malayalm original and I hav promised to send her this DVD so she can do a comparison as well.
January 28, 2012 11:11 AM

V. Manohar said…
Classic movie of Super Star Rajesh Khanna and it is better than malayalam movie.
March 06, 2012 1:32 AM