it's a man's world; or, a fine bromance: Qurbani

This post is chock-full of spoilers. The end was the most compelling part of this film - instead of the Curse of the Second Half, it ramped up in action and interestingness as it went along - so I'm gonna talk about it. You've been warned.

It's that kind of movie, but I enjoyed it anyway. It's well-paced, the acting is solid, the songs are appropriate, and even the worst comic relief is relieved by a slightly less annoying comic relief. Totally entertaining.

Qurbani is so male that the few women there are are almost entirely sidelined from their traditional roles. None of the three significant female characters is a mother. None! (In fact, the only mother in the film is part of the second comic relief.) Even the absent partner of our heroic single father is not explained in soft-filter flashback. I guess he's such a Super Dad that milking the loss of his partner and his daughter's mother is unnecessary.

I tried to rewrite Peggy Lee lyrics to talk about dishooming while providing daycare, but nothing has come to me.

Wait, what? A masala film with two heart-of-gold criminals but no Maa? Who knew!

That is, all the care-taking is done by men. The tenderest love, the most dedicated bedside worrying, and of course the biggest sacrifice is between the heroes Rajesh (Feorz Khan) and Amar (Vinod Khanna).

There's a love interest, Sheela (Zeenat Aman), but not much energy is spent on romance. There's Amar's little daughter Tina, but she's too young to do much except play by herself in her yard when some villains are lurking about. Yet much of action is driven by a woman - Princess Jwala (Aruna Irani) is robbed by her boyfriend (Amrish Puri), and in the resulting drama her brother (a nearly unhinged Shakti Kapoor) is sent to jail. Her scorn-driven fury and vengeance eventually bring down one evil ringleader and threaten to swallow Rajesh, Sheela, Amar, and Tina.

If Jwala had had normal contacts, would she have been able to deal with her rage in a more productive way? (Thanks to Memsaab for the picture.)
The film does not even allow Jwala the ultimate satisfaction of seeing her plot to its end; she is defeated before the ultimate show-down, leaving her brother alone (but still with the upper hand) in the final battle. So she's crazy with emotion and denied participation in the denouement she scripted? Thanks, Feroz.

That leaves the emotional heart of this story - along with most of its action, of course - to our two sweaty, muscly, bell-bottomed heroes, and I have to say, they did a wonderful job. I did not expect to like Qurbani particularly - all I knew about it going in was the two leads, "Aap Jaise Koi," and some motorcycles - but the love between Amar and Rakesh thoroughly won me over. It's very sweet. The film also kept me guessing about which hero was going to have to sacrifice himself in some form or other (whether romantic, physical, or perhaps financial); with only one romantic heroine, this was clearly not going to end with everything coming out even. [A detailed look at the final scene is now imminent. If you don't want to know the end, bail out now!] I was shocked when it was Amar who threw himself in the line of the bullets. Most significantly, Amar had a shred of family, whereas Rajesh was totally alone. A Hindi film sacrificed a parent for a non-parent? Whoa. Neither Rajesh nor Amar is clearly better than the other, which was one reason the eventual outcome was so interesting. Both are thieves (and target the same basic types of faceless rich-ish victims instead of, say, farmers or grain merchants or orphans) with their own code of social ethics and humanitarian streaks and who are more than ready to go to extreme measures to help their friend. Amar also seems to have suffered enough from fate already; he lost his wife; he failed to win over Sheela despite his beachfront longing (and Vinod's inherent general scorching smolder); and he was wrongly accused by Rajesh of treachery. I thought for sure those sad injustices would have let him win out in the end. Going back through the film, I noticed some foreshadowing. In a slightly awkward conversation, Amar tells Sheela that a woman's love can change a man's fate. As soon as I had realized she didn't love him back, I should have known he wasn't going to make it out of this thing alive. All of this culminates in an oddly moving last few frames, with all the drama of the final dishoom-dishoom

The principal love is in the foreground, connected, solid. If you'd told me this was a very modern movie about a gay couple, their adopted daughter, and one of their sisters, I'd believe you. It's all just so fascinating! No none is more surprised than I am that I had patience for this. I knew I was in for lots of fighting and stunts, but I had not expected women being denied relevance in the heart of the story, and usually I'm not willing to say much of anything good about a story that does that. But I really liked Qurbani. It's jam-packed with filmified friendship and dil-squishing dosti.

Some other points of a less philosophical nature:
Best extra role of 1980.

Some girls have all the luck. Veracious, you must see this.

I know I just raved about Ek Shriman Ek Shrimati's 1969 style yesterday, but Qurbani too is owed its props, and there is much fashion goodness here. I'll just inflict on you my very favorite, Feroz sitting on the beach in his tuxedo, gold medallion, and black leather boots. 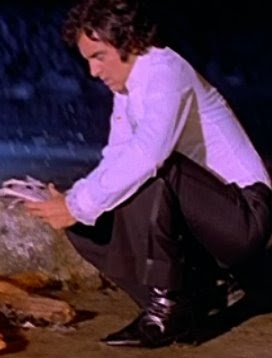 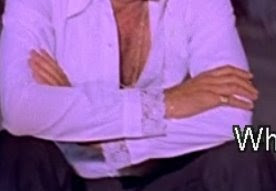 Does Aruna Irani ever get a happy ending? I've seen over a dozen of her films and can think of only one in which she winds up with something nice (Bombay to Goa). In Qurbani, not only doe she have to wear a purple body suit with feathers over her ears, she's so deranged with revenge that she has a light-up portrait of Amrish Puri in her living room.

memsaab said…
I liked Qurbani too, although I felt so overwhelmed by masculinity by the end that I needed to go to dinner with only my girl friends! :-) But typically Feroz, it had oodles of style. The story was dumb though, very very dumb (not that there's anything wrong with that).
June 21, 2009 3:53 PM

bollyviewer said…
lol at the Best extra Role award! Some women DO have all the luck. But whats with Zeenat? She has all the luck and chooses to squander it on an ageing (and remarkably dilapidated looking) Feroz when she could have Vinod! There is no accounting for tastes... *shakes head sadly*
June 21, 2009 10:33 PM

Filmi Girl said…
I keep meaning to see this! Maybe I'll make it a two-fer and watch Qurbani and Dharmatma back to back one weekend. I only need a little push to indulge in some Vinod Khanna sans shirt viewing...

Beth, have you seen Geeta Mera Naam? That's the one 1970s Feroz film I've seen and he wears some AMAZINGLY frilly outfits. I think you'd enjoy it if you haven't seen it yet. Sudhanna gets some great dishoom-dishoom in.
June 22, 2009 3:18 PM

bollywooddeewana said…
I said the very same thing about the homoeroticness of Feroz and Vinod to Rum regarding her header which features the two in this post http://rotikapadarum.blogspot.com/2009/05/prakash-mehra-rip.html
June 22, 2009 4:15 PM

Rum said…
Lol this movies just makes me have a dil-squeeeee! I have to do a post on this, i love the part where they fight inside and realize they were wrong and bang together in a hug! Vinod even pulls Feroz's hair for a bit! And the fact that there is no maa in this movie is great, no long lectures!
June 22, 2009 8:06 PM

Plus, for some weird reason, it was apparently better to die at the end of the movie than live - Rajesh Khanna and AB had a tense time of it during Namak Haram over who got to die because the corpse gets the sympathy vote at the BO (or so they thought). So maybe Feroz was doing Vinod a favor?

Beth Loves Bollywood said…
memsaab - That would have been a good chaser. After I wrote it up, I spent the rest of the day knitting and watching fashion reality shows.

I need to see some more Feroz movies, as either director or even actor. Recommendations?

And yes, the story is dumb. I liked how you detailed its stupidity in your writeup :) The most egregious example being, of course, why anyone would stick with Rajesh after Amar showed up.

bollyviewer - As discussed, The Vinod has The Powers.

I could not find sufficient evidence from within the film to convince me Rajesh was the right choice. Putting aside the sex appeal question, Amar does seem like the better choice. He's younger, he's more connected, he's obviously capable of commitment and loooove and all that, and we do not get any evidence of him being all moralistic about her nightclub career, which we do get from Rajesh.

FG - See it! It's totally fun despite the issues. I think we could have a great shirtless Vinod watchalongs!

I'm dying to see GMN! Todd sold me on it in one of his posts awhile ago. Must get.

bollywooddeewana - It's pretty hard to ignore! :)

Rum - It's wonderful! Definitely write it up - Feroz needs your special verbal treatment! :)

Amrita - Heehee. Also, if one does not die, one gets to hold the tortured facial expression longer - and perhaps direct it straight at the camera.

You know, I used to love Zeenat, mainly based on Don, and since then I have faded to luke warm. I don't dislike her, but these days I'm finding her almost interchangeable with Parveen Babi. In the stuff I've seen them in, neither of them seems to get roles that really distinguish them or let them shine exceptionally.
June 23, 2009 9:15 AM

memsaab said…
Beth---As far as Feroz goes, my favorite of his directed films is Apradh! You must see it. I also like some of his 60s films, he channels Shammi quite ably :-) Particular favorites are CID909 and Reporter Raju, both very silly but lots of fun. And I loved Dharmatma too---his take on the Godfather (I'm up for watchalongs on any of them) :-)
June 25, 2009 8:03 AM

Varghese Abraham said…
Robbery plot is as follows :- Feroz Khan doesn't want to rob Amrish Puri's enormous gold deposits because the police would definitely suspect him and he would go to jail for a long time. So they plan that Feroz Khan would rob the gold, hand it over to Vinod and get caught doing a minor/small robbery (which Vinod was already in the midst of, and Vinod also informs the police that a robbery is going on. Feroz comes with the bag of gold, hands it over to Vinod, and Vinod leaves for London. The police who were informed by Vinod's anonymous call, comes and catches Feroz in the act of robbery. Here we have to assume that Feroz was robbing Amrish Puri' palatial house, and Vinod was also setting up the robbery scene in some other house/office of Amrish Puri Amrish Puri in found dead in the latter location.