the light-up suit, great as it is, is not worth it: Yaarana

Yaarana - also known around these parts as "OMG Amitabh is wearing a suit with mini lightbulbs on it and stamping around a cheering arena!" - is terrible. I don't know how a project from the director of Do aur Do Paanch went so horribly, horribly wrong just one year later - and with a cast of Amitabh, Neetu, Amjad Khan, Aruna Irani, Jeevan, Ranjeet, and Kader Khan, at that! I usually really like movies about friendships - especially when the friendships hold their own against the more pervasive social pressures of romance and familial love - but this one was so bad I almost turned it off without even getting to the light-up suit. Maybe casting Amitabh and Amjad as the bestest of best buds just upset the cosmic Sholay-ordained order so much that nothing that followed it could possibly be right? Or maybe this is the fateful lesson of what can happen when you remove Shashi from an Amitabh-based masala equation?* The central friendship starts out okay: Bishan (Amjad) and Kishan (Amitabh) (whom the subtitles usually refer to as Bhutan and Krishna) are childhood friends (Master Tito zindabad!) and are remarkably emotionally aware and secure in their friendship, given that they are 13-year-old boys, repeatedly promising to lay down their lives for each other and suffering great distress when wealthy Bishan is sent away to school. Fast-forward an unspecified number of decades to "now," however, and they haven't matured at all and are full of manic pranks and stupid ideas. "I'm somehow feeling like Will Ferrell or Adam Sandler could be doing this," I said to The Horror!?, my watching companion. He replied "I'm mostly feeling bored and want to punch the two. This couldn't be worse with Jagdeep and Johnny Lever." I promptly chastised him for tempting the fates but agreed with his sentiment.

At least it's relatively short.

Let's count some of its flaws. Kishan is painted as such an unbelievable moron - that annoying equation of rural and uneducated with bumbling and naive - that he mistakes an elevator in the big city for an aging machine when Bishan goes in it, the doors close, and in a few seconds open again revealing an older gentleman. 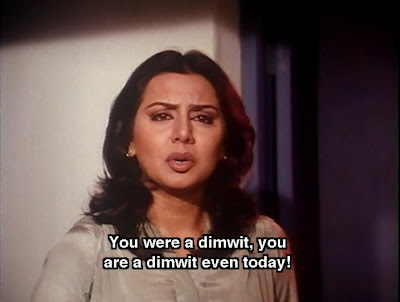 You said it. He's insufferable.
The romance between Neetu and Amitabh barrels out of left field with no development behind it. Neetu isn't given anything fun to do, and even her two songs seem more like something I could do in my hallway than an arena-worthy show. Several characters go crazy - or pretend to be crazy - without convincing reason. 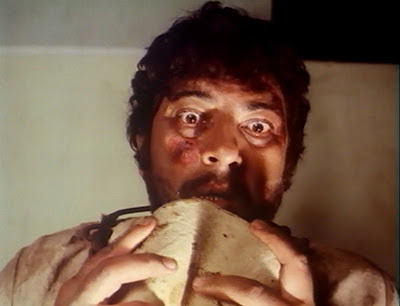 Scary roti -> crazy eyes!
What jokes there are go on way too long. There's a hyperventilating, constantly wailing child in the pre-titles preface (who grows up to be the less annoying Ranjeet). The subtitles reached a new level of mistakes, with lines like "I revere your remember our saga" and the accidental inclusion of the time counter. 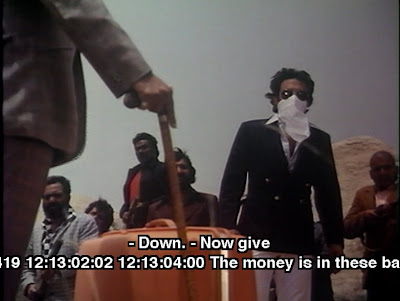 There's occasionally even a freestanding "ä." There are many random moments of slow motion. People are suddenly moved instantly from one location to a very different one - from the city to Sholay-ish deserted rocky hills, for example - which is silly, because we all know that teleportation only works during song picturizations, not in regular dialogue. There were three solid seconds of a blank screen (oh sweet respite!). Hang-gliders are used to raid the villain hangout. 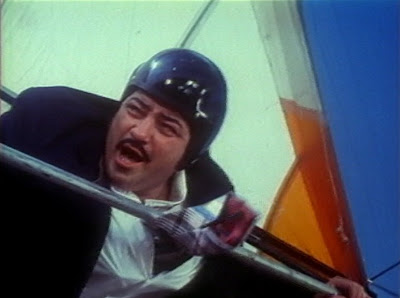 Well, okay, that might be kind of awesome, even though neither Amitabh nor Amjad has the sense to strap himself in.

Yaarana's only virtues are musical. Bishan insists on sending Kishan to music school even when money gets tight, so Kishan, ever sacrificing, tries to get himself thrown out by starting a fight at a dance, inspiring The Horror!? to say "pseudo flamenco disco guitar violence" and me to say "mischief disco" at exactly the same time. Amjad Khan has his own song wearing a captain's uniform with a group of schoolchildren on a ship, a combination I have definitely never seen before. If my ears do not deceive me, it's called "Bishan Chacha," and you can see it here starting at about 5:00. If you keep watching until the end of this clip, you might catch a glimpse of Ranjeet in a disguise that seems to include carrying a squirrel pelt in one hand. And of course "Sara Zamana," the long-anticpated (at least by me) song of Elvis-like entrance, fake guitar-playing, and light-up suit. 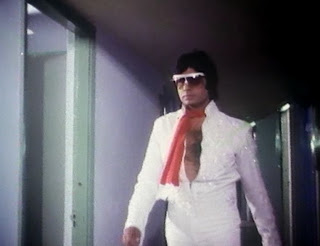 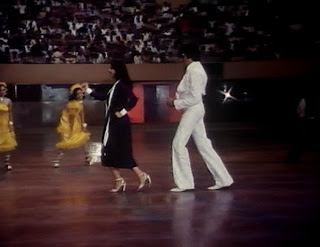 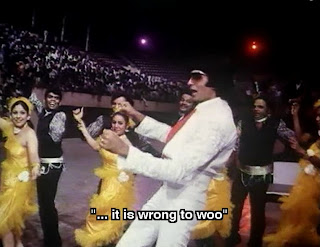 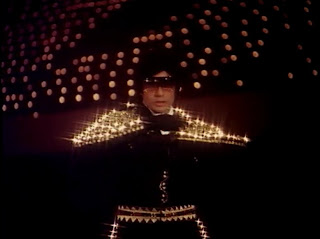 It should be noted that the costumes of leads and backup dancers suit neither each other nor the music, and choreography is pretty lacking, but still, it's the best this movie has to offer.

The Horror!?'s review is here, and unfortunately he's not exaggerating.

* There's a good poll topic: which is more likely to be bad, masala with Shashi without Amitabh, or masala with Amitabh without Shashi? In my book, Fakira, Chor Sipahee, and Duniya Meri Jeb Mein are all much, much better than this, but Don and Amar Akbar Anthony are both better than all of those. Then again, AAA has Rishi, and this has only an underused Neetu, and while both are Kapoor, the former is male and therefore much more likely to have a role with impact. Yet Don has NO Kapoor of the variety we mean! So is Kapoor, or is Kapoor not, sine qua non? It has been proposed that true masala shall exist ⇔ the condition of Kapoor is met, where Kapoor={Shashi, Shammi, Rishi, or Neetu Singh}, but that would mean Don isn't masala, and surely that isn't right either. Brain exploding!
Labels: house favorite: Neetu Singh thoughts on movies

Bollyviewer said…
Sounds like you had a tough time waiting for the light-up suit! I saw this as a kid and remember it rather fondly but it might well be because Amjad Khan was not, for once, terrifying the hell out of my kiddie self with his demoniac laughter!!! ;-) Neetu probably didnt do much because she was too busy being the Kapoor bahu (according to imdb she got married the year before this released) and had no time for films anymore... soooooooo sad for us.
February 01, 2009 3:11 AM

Temple said…
hey Beth, I haven't seen Yaarana but since you mentioned dance routines you could have executed in your hallway and how the sparky suit wasn't enough- One of my friends made his own suit of lights for a Bollywood dance performance. He and his cohorts did a really fun medley including Ek Do Teen and then....the lights went out and off he went. It was hilarious and fantastic and we still talk about it. So that should give you a few ideas for the next hallway choreo session :)
**tech stuff - he used coloured Christmas lights - you know, the ropey type ones and taped them onto his outfit. Gold!
February 01, 2009 4:36 AM

Beth Loves Bollywood said…
Bollyviewer - UGH! This movie is SO BAD. It wasted so much good potential - pity the light-up suit is mired in this garbage. I generally think songs are even better in the context of the story and all that, but not in this case.

Neetu in particular looked like she had just popped in to film for an hour here and there while doing her errands. Her clothing seemed so un-wardrobe-department, you know? She looked perfectly classy but there was not an ounce of excess - I don't think I saw her with any jewelry whatsoever, for example, and they never dressed her as a gypsy or anything! Bah!

Temple - Oh you must! Once again your story makes me want to hop on the first plane (though isn't it 40 where you are? absurd!) and hang out with you and your wonderful pals. IMDB says Amitabh thought up the light-up suit idea himself! I hope that's true.
February 01, 2009 9:12 AM

Filmi Girl said…
Just another reason NOT to watch films based on great picturizations - this had led me to such stinkers as Ram Balram and Hum Kisi Se Kum Nahin (Amit and Dharam in the first and Rishi and a failed Hero launch in the second.)

As for masala more likely to be bad... I'm going to go with the masala without Amitabh - Ram Balram notwithstanding, Amitabh pairs well with quite a few actors - Vinod, Rishi, etc...

Anonymous said…
Bhutan and Krishna are my new fave pair! I haven't seen this movie in a while but I don't remember it being so bad, mainly because I think the humor in it is mostly accent/language based and from the looks of the awful screengrabs, that is not something that is going to translate well in this instance. However, the whole second plot where the masala bits come in is extremely unnecessary and (crime of crimes) boring!

ajnabi said…
Hmmm. I think I'll just look at your screencaps and then watch Jhoom Barabar Jhoom if I still wanna see the light-up suit in motion. ;-)
February 01, 2009 10:27 PM

Rum said…
ohhh dear, i have been sooooo tempted to pick this up and gorge on a diet of amitabh 80's movies like i usually do, but amajad never struck me as the type to have a yaarana with! You must donate to the "filmi bacha chit fund" master tito hasn't been adopted yet, he needs u beth!
February 02, 2009 1:39 AM

Nirvana said…
you are right. this movie is nothing but unadulterated garbage. Big B ad the songs are the saving graces.

Keith said…
I think masala got as far as Qurbani, and that one was so awesome that all other masala threw up its hands and said, "Ahh, we ain't gonna top that. Let's just spend this decade making Toofan"
February 02, 2009 11:14 AM

Beth Loves Bollywood said…
But Keith, Namak Halaal is after Qurbani, and I can't imagine that isn't just as awesome!
February 02, 2009 11:16 AM

gullu123 said…
I have some news about dis movie. Neetu only spent a hour cuz of her marriage. In the song Sara zamana, she only appears in half of the song because she missed rishi.
June 20, 2014 1:05 PM