I love a challenge. I especially love a writing challenge. So when The Buddha Smiled tagged me to discuss movie characters that should have had blogs and in what ways would their blogs have changed the movie plots, I was thrilled. I had marked out today to work on my Fulbright project - they seem to think they deserve some sort of educational, useful project in exchange for the five weeks in five-star hotels, whatevs! - but that was already down the drain after sleeping in and lounging in the sun for awhile.

I'm limiting this to Bollywood movies, since that's what I'm here for.

You know who I think should blog? The side characters. The ones we're left wanting to know more about or the ones who give us the impression that they have a lot more to say than they ever get screen time for.

To do this tag properly, I need to blur reality a bit here, to feel like these characters are real people who exist beyond the scope of the movie because what good is a blog that just lasts a few days or months? You get hooked on it, and then it peters out or disappears. Phhbt to that. You have to do that kind of pretending with movies sometimes, pretend that you're just seeing a little bit of their lives, dropping in on them for awhile, and that they exist after the credits roll.

I immediately thought of my first choice for this project before I was even tagged, as soon as I first read Filmiholic's response when she was tagged: Deepa. You remember Deepa: the most enthusiastic, 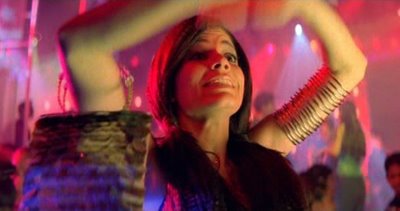 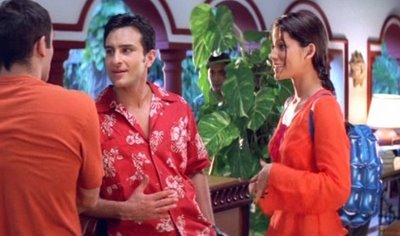 and sad girl in Bollywood (or at least in Dil Chahta Hai). 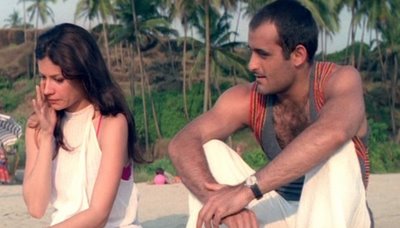 I love Deepa. Hell, I am Deepa.* And I want more background. How did she meet Akash? How long has this been going on? How many times has she yelled his name across the crowded college quad? Has she suffered in silence through watching strings of his short-term flings? Did she sit behind him in a class, doodling his name on her notebook? Did she get a crush from afar, then work out ways to get to know him, befriending Sid or maybe accidentally-on-purpose having lunch at the same time as he did every week?

And don't you remember how unpleasant pre-interrupting-Shalini's-wedding Akash is? He's really not that much of a catch when not on the dance floor. He's generally a blustering, short-sighted jerk, even to his best friend. Why does she love him so? That's my real question. Why him?

And we just lose Deepa after Goa and have no idea if she's able to take heart and move on - although granted, I reckon Sid is one of most sensible and caring young men ever to cross the screen, and if anyone could talk me out of an unreasonable crush yet simultaneously build me up, it would be Sid. Does Deepa really believe him that she's intelligent and nice deserves something better? Does she find evidence of this in herself and go out and make some better friends? Does Deepa even have any friends, or does she usually present this most insane version of herself to everyone?

While I love how this movie both pokes a little fun at her and treats her gently, with real empathy, I'd love for her to have more of a voice. But that would take time away from the central stories of our male friends, so that would just be a different movie. But what if Akash, Sid, and Sameer were intercut with the writings of their respective ladkis? What would we learn about the boys, and how would our opinions of them change? Akash is probably both more and less lovable through Deepa's eyes - we'd see exactly how many times he'd slighted her, but we'd also see all that was good about him, which must be all she sees.

Tara's blog would be all arty and wry, and all her art-school friends would leave funny comments about her boy-toy, and she'd try to brush them aside while realizing that - rrrrr! - she does actually have feelings for him, and now what is she supposed to do? She can't let such a sweet young man into this hard world she has. Her life is complicated enough with the rat-bastard ex and the sadness over her daughter and the doctor visits - she doesn't want Sid to see her like this.... And Pooja would weigh Sammer vs what's-his-name, and her friends would leave comments egging her to dump that guy and go with Sameer.

So, yeah, that would be a different movie. It might give us a deeper picture of the boys, but it might also detract from the central story about their friendship with each other, and I would hate for that to happen. I really do love DCH just as it is. So maybe it isn't a question of whether Deepa should blog - and more along the lines of "What movie character's blog would you love to read?"

Although maybe we get her complete story here. After all, for some people, this

would well on the way to contentment, rosy sunset and all.

I tag Bollyhoo. Your public is restless.

Aside: other characters whose blogs I would very much enjoy reading include Percy and Ms. Chandni from Main Hoon Na ("Sanju...Sanju... Sanju...Mini!" and "Oh my god. I keep having daydreams about one of my students in see-through shirts! I just got this job, but already it's just like Xavier's all over again!", respectively); any of Arshad Warsi's sidekicks; and any of the villagers in Swades, maybe the postmaster who was so enthralled by email.

Aside to the Buddha Smiled: See? I did it! I bet you never really had any doubt.

* Affetionate and well-meaning but overly demonstrative, slow to get a clue, and just a little bit nuts.

Anonymous said…
I had totally forgotten Deepa, but when you mentioned her, she came flooding back! A really sweet, normal & pretty girl who just fell for the jerk who happened to be the college jock...now why don't they fall for the nice guys?!?!?!

And Beth - there never was any doubt that you'd come up with something spectacular. And best of all, you managed to include Akshaye Khanna into it as well, if only tangentially...If I could have carried it off, I'd be saying, "You Go, GIRL!"
October 08, 2006 3:40 AM

babasko said…
oh, I love Deepa. Akash was such a jerk before the mothi operasinger changed his attitude.
Thats a great post. And I really hope Deepa got a guy like Sid.
October 08, 2006 1:14 PM

Anonymous said…
Was I the only one who thought that the girl at the end with Sid was Deepa?

babasko said…
hihi TB thats what I thought when I saw the movie the first two times :-) And then I actually was sad that ladki Deepa nahin thi.
October 08, 2006 4:41 PM

ggop said…
Beth,
You picked my favorite movie of the last five years and a great side character. My pet peeves these days is the movies just sweep these characters aside - no time left for the moms of guys. They barely get a scene or two!
Thanks for the post. :-)
gg
October 08, 2006 4:52 PM

TBS - thank you! That's the nicest unspoken compliment a girl could ask for. (I am so hopelessly WASPy that I can't carry it off either. I totally understand. I can't even really sing along with "all you desi boys in the house, just put your hands up and join the crowd" in "Say Na Say na." Sigh.)

This is a really fun tag. Something tells me it will be it in the back of my head for the next few movies. As you will see....

Babasko - totally! And I think we can have faith that Deepa is doing okay. She might think about Akash from time to time, but she's better off. I think I might have to start her blog, actually. I want to know how she's doing too.... But that would tip me from "Bollywood fan" into "fan fiction writer" and I'm not sure I want to put my creative energies there.

TB - Sid's girl is in fact some German chick who got herself a plum non-speaking five-second role. Mandala Tayde appears to be her name. Ordinarily I don't like to refer to women as possessed by some man, but she hasn't got a name, I don't think, nor does she speak, so what the hell am I supposed to do? "Girl who ends up with Sid despite having no evidence of personality" is just distressing. It's at that point I was able to disassociate Akshaye from Sid. Aksahye would never go for someone with no personality.

Anonymous said…
Gah, I'm it! I figured my public had fallen asleep by now.

Anonymous said…
Beth, like you I always wondered about Deepa. She was sweet and just did not want to back away from Akash. I looked at her and said, "Hell, I am Deepa." Beth, I hope thats a consolation, that you are not the only Deepa out there.
October 11, 2006 9:25 PM

Beth Loves Bollywood said…
ads - ha ha ha! You must write! School schmool. People in India itself are clamoring for your blog.

Stella - that is comforting! Hopefully we Deepas will end up okay. I think we will. There's a lot to be learned from Deepa, I think: try to be aware of your own ridiculousness, but feel with your whole heart. And listen to the wisdom of Akshaye, but that's one for everyone, not just us Deepas.

And for everyone who said it: I too hoped Deepa and Sid would get together. Sid really did need someone with a bit of spark, with a personality, and Deepa needs someone who is kind to her and appreciates who she is. Voila! Match made in heaven/Goa.
October 11, 2006 10:30 PM

Amey said…
Circuit writing a blog? Wow, now that would be a read...

Pankaj Sachdeva said…
Can guys be Deepa? I am a guy and am totally like Deepa..I just love her because I am just like her too..and you have written brilliantly..she is aware of her ridiculousness..Where did she go? :(
August 31, 2011 12:31 PM

Beth Loves Bollywood said…
Pankaj - Absolutely guys can be Deepa! She speaks to us all! :D I like to think she is all grown up now running a successful match-making agency and surrounded by tons of friends who appreciate her for exactly who she is.
September 06, 2011 12:34 AM