Showing posts from December, 2013
Show all

- December 23, 2013
[One sorta spoiler, and it's coming right now , so skip to the next paragraph if you're afraid.] Yougaiz, how much of a twist can it possibly be if it's an infamous trait of 1970s Bollywood? And now that I think about it, someone should organize a really good dissection of what the concept of "twist" does and can mean, where the line is between a twist and just consequence-free writing, and whether some producers cackle with glee when reviewers are forced to keep mum about huge problems with of a film for fear of having their heads torn off for giving away the twist, which is how I felt about trying to write about Talaash . [End spoiler.] Chicago 1. I've been waiting for ages for a Hindi film to feature Chicago in any way, even just in a song, because the very brief appearance in What's Your Rashee?  hardly counts, and Dhoom 3  lives up to my hopes. It looks beautiful and captures exactly what I am always captivated by in the city: substantial and soar
13 comments
Read more

We in the fillum-watching world need a word for this intricately balanced but continually reconfigured sense of finding movies formulaic and/or predictable in some aspects yet wildly unexpected in others. Whatever it's called, Aditya 369  (which I watched in its Hindi dub, Mission 369 , since no versions on youtube have subtitles) falls right into this phenomenon for me: somehow I had never heard of this 1991 Telugu sci-fi film about time travel with an Einstein-haired Tinnu Anand and a Georgian-outfitted Amrish Puri despite regularly reading the "top ten Indian SFF films" lists whenever I encounter one at the release of a film styled as such, and in fact only learned of it in Mihir Fadnavis's piece on Krrish 3 for Firstpost , yet I am not at all surprised   it exists. And it's great. I am not a reliable source for details of the story of  Aditya 369 , but I do know that an impish child gets himself locked in a museum (A MUSEUM!!!! I would love the movie
4 comments
Read more 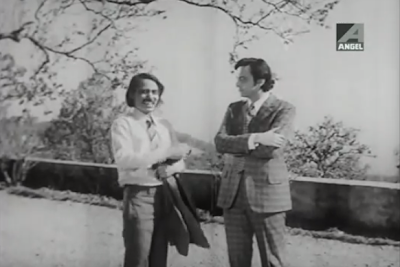 By way of introduction: a bunch of Bengali films I've seen lately, all in under 100 words each. (Ray's  Seemabaddha  should be in here too, but I need to see it again before I write anything. And of anything on this list it merits far more than 100 words.) Chutir Phandey  1975   An experiment in whether vintage Soumitra Chatterjee in plaid offsets a lack of subtitles. It seems to be a comedy of errors (i.e. "wackadoodle shenanigans") hinging on Aparna Sen (his wife) and Utpal Dutt (his boss?) in a hotel/conference center somewhere vaguely Himalayan. Faces are pulled (ugh) and wigs and wild patterns are worn (yay!). It might be as funny as Hrishikesh Mukherjee if one knows what's being said; even though I don't, this has no sign of being nearly as fun as the lead pair is in Baksha Badal  (written by Ray). Kony  1984 I've never seen this title in lists of sports movies, despite it having won a national award for "wholesome enterta
7 comments
Read more
More posts