Showing posts from April, 2010
Show all

- April 29, 2010
My friend and, it must be said, shameless enabler Samrat* sent me a selection of song picturizations to gear up for Khanna-o-Rama; as usual, upon receipt of said gifts, I knew the right thing to do was share them.

Beta the Younger
Gleeful, splashy, dost-filled "Tarum Pum Tarum Pum" from Doli Saja Ke Rakhna (which I will be reviewing next week). This film is another example of great songs indicating nothing about the movie itself, but A. R. Rahman's music and its picturizations are really fun (e.g. Amrish Puri, who is not evil, does a drunken hornpipe). How can you not love the raincoats at 1:30, the fleet of umbrellas at 1:50, and the totally superfluous fashion show at 2:25?


Beta the Elder
I'd like this song no matter who was in it simply because it is filmed in Toronto, my adopted hometown, and it is both a little bit of a parody of Bollywood songs (look for the intro text that says "Romantic couple song: 'Just now we are falling in love'") while bein…
3 comments
Read more

- April 26, 2010
2010 is shaping up to be a year of theme weeks. This month it's the Khannas (Vinod, Akshaye, and Rahul) who get to bask in the glow of blog attention, and as usual anyone is welcome to participate! Whether you prefer daku dishoom, emo bubble songs with puppy-dog eyes, or sophisticated twitter wit, this (totally underrated, in my opinion) family offers something for everyone. So far, Filmi Girl, Indie Quill, Old Is Gold, Shahrukh Is Love, So They Dance, and I are on board; please leave your site (or twitter ID) in the comments if you want to promote your Khanna-themed projects too! Keep an eye out for movie reviews, biographical tidbits, song silliness, costume analysis (e.g. from what magical source did Vinod draw his ability to rock white bellbottoms better than anybody else on the planet?), and more, including my response to Rahul's selection for his favorite film of his dad's (I asked him on twitter and he responded! Loooooove!).

- April 21, 2010
Bollywood Deewana has just upped the ante on the requirements for a Cha Cha! Bahut Accha! winning entry, set and costume division:

This song shows remarkable commitment to theme. I'm trying to find something in here that was not inspired by playing cards, and I can't find anything. Even the rotating platforms in the middle remind me of poker chip caddies and the very mini mini-skirts of the tunics worn by the male royal figures on face cards. The music and actual choreography are kind of nondescript, but with a look like this, who cares!
3 comments
Read more 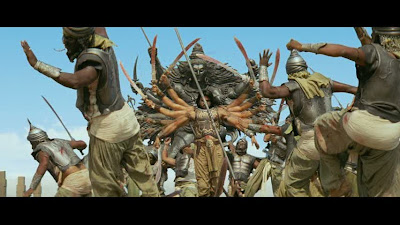 MAGADEHEERA. OMG. It has to be written in all capital letters. That is what kind of movie this is. This has blown my mind so thoroughly that I have been speechless in the days since finishing it. Coincidentally, Go Fug Yourself wrote a fantastic piece on this very sort of chaotic inexpressiveness at the same time I was battling through my reactions, and as ever they have summed up my thoughts perfectly. Here is GFY author Jessica describing yet another wackadoo outfit of the always...um...eclectic actor Bai Ling (Go Fug Yourself "Bai Ling's Fuggles").
There are some outfits so craztacular that I worry my store of words doesn't contain the right ingredients to appropriately comment on them.... The first thought that pops into my mind is, "This is like...I mean, it's...there are feathers? And...a bra top? And tulle? And...ruffles? And...like...they're all...connected? AMAZING." That is barely even a sentence, you guys. But seriously.…
27 comments
Read more
More posts