Showing posts from March, 2010
Show all

- March 23, 2010
A few hours ago, DJ AshishB , the talent behind the excellent Beats from the East show, sent me this video. After watching it all the way through with my mouth agape in a mixture of shock and delight, I knew the only reasonable thing to do next was to share it. Here is "It's My Challenge" by Bappi Lahiri from 1987's Pyaar Karke Dekho featuring Govinda in a dance-off. As no doubt are you, I am fond of both tiny and oversized props and set pieces in songs, and I think the confrontational duet between Govinda and Paul Bhattacharya on top of (and back and forth over!) a pair of giant tablas alone is worth the almost nine minutes of this song. Light-up translucent guitars, golden cummerbunds, lightbulb-encrusted moon rocks, literally record-breaking dance moves, and lyrics like "Breakdancer! Breakdancer!" and "Naacho! Gaao! Naacho gaao naacho gaao wow wow wow!" are icing on the cake. See how many nods to great popular songs and/or dances of the pas
5 comments
Read more 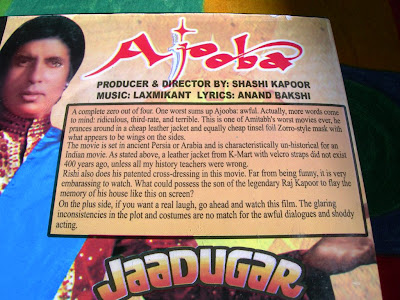 Alert reader Temple sent me this photo of the hilarious and scathing review of Ajooba that is featured on the back of the case of her copy of the film. With marketing like this, who needs enemies? For those who do not wish to squint, the text is identical to a user review on imdb (bottom of the page here ), helpfully titled "One of the worst all-time Hindi movies ever." Happy Monday, everyone! I hope your day reaches at least one out of four.
8 comments
Read more

- March 21, 2010
As most readers will know, Shashi Kapoor was recently honored with the Filmfare Lifetime Achievement Award. What you probably didn't know is that he made a lengthy, significant, and history-soaked acceptance speech that was never televised. You may have read that all he said is "Thank you," but that is far from the truth! How the entire film fraternity (well, with a few notable exceptions) managed to keep their mouths shut about this magnificent oration, we'll never know, but now you, dear readers, have a chance to hear his words in this exclusive report! Thanks to a fantastic friend at Filmfare, Old Is Gold and I had a rare opportunity to be present for the awards. But our friend had only one pass to spare, so, like good long-lost, recently-reunited masala sisters, we promised to share and share alike. I drew the straw to go in first, so I have the first half of his speech here for you, transcribed word for word off the recording I sneaked with my phone. The Yaad
5 comments
Read more

things to love about Ajooba 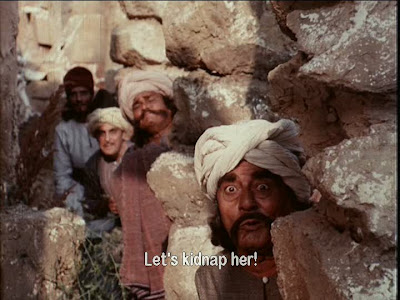 Shashi Week 2010 on Beth Loves Bollywood has seen Shashi in front of the camera as an actor and interview subject and behind the scenes, as it were, as a producer . It's only fair, then, to take a look at his one turn behind the camera. That's right, folks! I'm taking another crack at Ajooba ! Released in 1991, this film seems to get a bad rap for its very unrealistic special effects and models. When I originally saw it, I was surprised at how not bad it was. I didn't exactly think it was great - Amitabh with a lightsaber not withstanding - but what amazed me was that it was a very solid 70s-style masala film that happened to be dressed in Mughalstan outfits sprinkled with magic spells . But now that I've seen more 70s masala, most notably Dharam Veer , my opinions of both the Prayag Raj-authored story at the core and its treatment have risen to genuine affection. I know, I know, I'm biased, but I really enjoyed Ajooba ! Let me tell you why. For starters
13 comments
Read more
More posts