Showing posts from July, 2014
Show all

hopping and skipping through the decades: Bengali mini-reviews 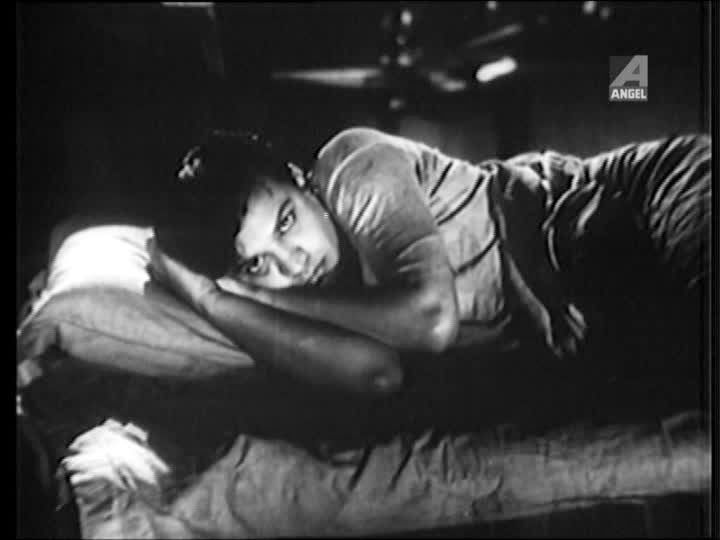 (Another in an irregular series of posts with various short-ish reviews in them. There's no theme to this collection other than "stuff I happened to watch.") Saheb Bibi Golam  1956 When I first watched the Hindi version for our podcast on iconic female Hindi film characters and Amrita asked me what I thought of it, I said something like "It's powerful, but I never want to see it again." Since then, my tolerance for certain depictions of certain kinds of female suffering has improved, and good thing, too, since the earlier Bengali version is minute-for-minute just as painful as Guru Dutt's. I don't mean it's painful because it's badly made or boring. I mean painful in that watching these people make these choices and treat each other as they do is excruciating. This whole "we're suffering because that is the logical result of the only choices society gives us" basis of stories, whether the stories are written at the time
6 comments
Read more

- July 12, 2014
Charmed. CHARMED. It's rare that any film trying so hard to reference DDLJ and its twenty-year-old arm-flinging ilk actually succeeds as a romance that is both timeless and contemporary. What I love about Humpty Sharma Ki Dulhania is that almost every aspect of it is collaborating in making a story that uses both its brain and its heart. Humpty denies that he has those virtues himself; he's all heart and no brains, he says, but we know that's not really true. And that's another great feature of the film: the characters may reference types and styles we've seen a zillion times but they are more complex than any collection of cardboard jokes. Feisty heroine from overprotective family; doofy hero with in-college swagger but a very everyday adult life ahead of him; stern patriarch, thuggish brother,* sympathetic mother. For all its DDLJ -ness, Humpty  actually doesn't have an embrace in a mustard field, thank merciful Helen and all her seraphim. Writer-direc
6 comments
Read more

- July 05, 2014
Yay! The female lead is front and center in the story, the emotion, and even billing and promotion. There are probably few women other than Vidya Balan that the film industry would risk doing this with—maybe Rani Mukherjee ( Aiyaa, the upcoming Mardaani ), Kangana Ranaut (unless Revolver Rani  cancelled out Queen ?), Deepika Padukone after her mindboggling 2013—and her being the unquestionable focus of a film is thrilling, which we haven't seen her get to do since Kahaani  over two years ago.  A woman— the  woman—cares passionately about her vocation and is willing to sacrifice other concerns to it...and then figures out on her own what work/family/love/etc balance is right for her. Bobby has ambition, makes plans, does the grunt work, earns the money, signs the lease, and catches a bad guy all on her own. She also knows when to ask for help and, eventually, listens to the reminder that her loved ones are not cases to be solved.  Central figures of both genders make mistakes.
Post a Comment
Read more

Nayak and A Hard Day's Night 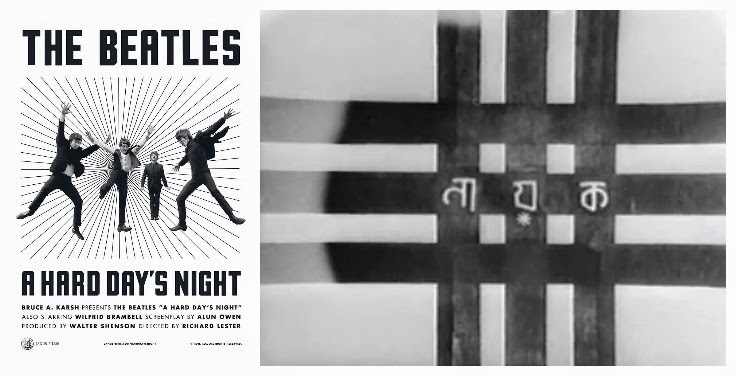 Criterion and Janus Films have restored and re-released  A Hard Day's Night (1964), opening in theaters in the US starting over the long holiday weekend. Seeing it on the big screen for the first time and looking and sounding so good after decades of VHS and tv is a thrill. What I don't remember appreciating in all my previous viewings is what it has to say about pop celebrity in the mid 1960s. It is that particular point that made me keep thinking—amid the jokes, personality, energy, and THOSE SONGS—about Satyajit Ray's Nayak  (1966), released just two years later and also a loosely fictionalized but reality-grounded story of a day in the life of someone very, very famous. * Even the poster for this re-release reminds me of Nayak : stark black lines evoking both movement (starburst, train tracks) and constraint (the center of a target, blocked by a grille, as Ray loves to depict windows). AHDN  is much, much more concerned with the former, as suits the absolutely
3 comments
Read more We're late to Mithun Month (IST?) but now that we're here, we're armed with ONE WHOLE HOUR of podcast goodness on not one, not two, but THREE Mithun films: Surakksha  (1979), Wardaat (1981) , and Guru (1989). Enjoy! (Or download here .) Additionally, I did a podcast with Sujoy over at One Knight Stands about the equally fantastic Mithun film Karate (previously written up for a guest post at Die Danger Die Die Kill here ). Click here to listen. Warning: you WILL get the film's über-repetitive theme song stuck in your head.
3 comments
Read more
More posts