Showing posts from September, 2013
Show all

Anupama Chopra's 100 Films to See before You Die

- September 30, 2013
[Full disclosure: I was sent a copy of this book by the author.] Doesn't it seem like we all grumble about lists but then we write them anyway? I know I do. Anupama Chopra takes one of the few reasonable approaches to such a project as 100 films from what seems to be the whole world of feature films, stating that this book is is meant to be food for thought for the reader from among movies the author loves, with different titles grabbing the reader based on their mood, what films they've already seen, or what films they might be ready to learn about and try. There's the feeling of "something for everyone" in here, ranging from Kabhi Kabhie to Spinal Tap , which makes me think that  Chopra, like Roger Ebert, tends to take films on their own terms. This leads to a likable individuality in the completed work, evident not just in what is said about each particular film but in the work overall. The effect is a bit like Chopra narrating her DVD shelves at home, wh
3 comments
Read more

- September 07, 2013
Beth:  Can you be objective about what we saw today, given that you are the de facto patron saint of Yash Raj Films and at least two of your films' posters make appearances? Minikhan:  This isn't really an SRK, arm-fling, filmi kind of film, so I think I have only an average-viewer level of investment. Beth:  Its few moments of filminess actually feel intrusive and artificial. Minikhan:  Agree. Mostly the songs— Beth:  That whistling—oi. Minikhan: These characters are playful enough but having them break out into side-by-side choreography and run slow-mo through tourist attractions doesn't feel authentic to them. Beth:  Sometimes songs are wonderful reminders of the joy and power of escapism, or even projection of imagination or wishes, but I didn't get that here. Minikhan:  No. I think the songs would be better just playing in the background for the characters so that we know they hear them, and we can see them reflect or react to what they hear, but somehow th
5 comments
Read more

another look at Jewel Thief 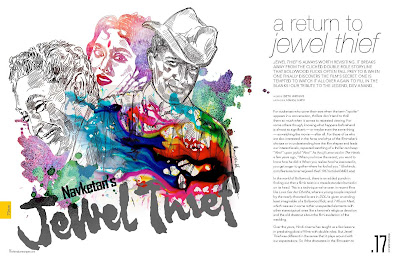 The last few months have been full of friendly appearances at other sites and publications. The latest is an essay on Jewel Thief  at issue 2 of The Indian Trumpet , specifically on why I think this film that has so many unknowns and so much suspense and mystery is a joy to watch long after you already know what happens. It is available in the lovely online version of the magazine  here (flip to page 16) or as a pdf here .  Love the art!
3 comments
Read more
More posts