Showing posts from July, 2013
Show all

mini-reviews of films I wanted to like: Rockstar and Nautanki Saala

- July 14, 2013
Two little posts on two films about artists that didn't work as well as I hoped they would. Rockstar Caveat: I dislike  Rockstar  so much I couldn't even finish it. Therefore I must 1) forfeit much of a right to talk about it beyond these paragraphs and 2) acknowledge that some of my problems with it might have been resolved if I had kept watching. But "keep watching" was not a bargain I was willing to strike with a film with two idiotic protagonists, one of them horrendously acted*, that seems to assure young men that if they pester/stalk a woman long enough she will eventually hear his case case and very quickly find him so charming that she unveils her secret "bad girl" self to him and takes him to a porno, and that suggests that the only way to create art is by experiencing pain, an idea I find highly suspect despite the long fondness of cinema for showing us asshole artists. I don't even remember what was happening when I finally crossed the Jor
7 comments
Read more

in honor of Pran 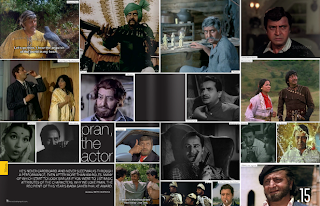 I recently wrote about Pran's career when he was given the Phalke award, and with great sadness it is timely today at his death. My article "Pran, the Actor" appears on page 14 of the debut issue of The Indian Trumpet, available online here  or as a pdf here .
3 comments
Read more

I hardly knew you, but oh how I loved you: Music World on Park Street 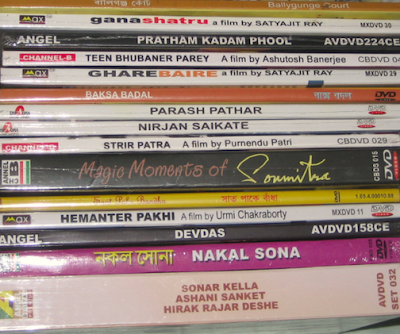 I am oddly saddened by the news of the closure of Music World —a chain store, and I don't tend to choose to patronize chain stores—in Park Street in Calcutta—a city I have spent all of ten days in and have no urgent plans to revisit. Here's why: That's right: "Magic Moments of Soumitra." It's not as simple as noting gratefully that Music World sent me home with 18 Bengali film DVDs, most of which I am certain I would not be able to find at the DVD shops on Chicago's Devon Avenue. (As for shopping online: granted the price of airfare to India ups the per unit cost of each of these DVDs, but if you assume I was going to be in India anyway, they're radically cheaper than buying online, where Bengali DVDs seem to go for around $15 as opposed to Hindi films that average around $7. I got this stack for about $85.) It's also not as simple as remembering how much fun Amrita I had in there, both of fairly new to Bengali movies and genuinely freakin
2 comments
Read more
More posts