Showing posts from September, 2012
Show all

- September 29, 2012
Thoughts on the six feature films I saw at the Chicago South Asian Film Festival last weekend! A Decent Arrangement (2011, dir. Sarovar Banka) I really wanted to love this film about a rudderless (or slacker, as the director called him) Indian-American man, Ashok (Adam Laupus), who goes to India for an arranged marriage wrangled by his aunt (Shabana Azmi). A Decent Arrangement is less the culture clash story that that description may suggest and much more Ashok's coming of age, even though he is putting a first toe in the waters of self-awareness and bravery at a more advanced age than you might suspect. I was frustrated with Ashok throughout most of the film because he refuses to say much about what's going wrong with his life. My favorite moment is when he explains to another American traveler that he is getting an arranged marriage not out of any sense of Indian cultural identity but because he has seen the contentedness of his married friends and wants a little piece
4 comments
Read more 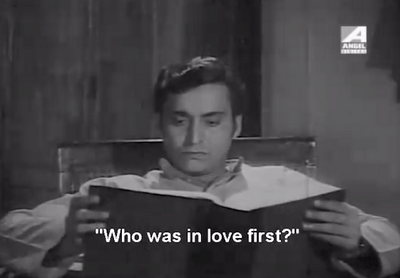 Last month, I finally decided I was tired of conversations that included "What? You haven't seen the Apu Trilogy?!?", so my friend Ellie and I made a date to watch Pather Panchali ...and I haven't looked back. I get it now. I get why so many people love Ray and I add my name to their numbers. Ray films like Apur Sansar ,  Charulata , and the Feludas have of course led me to Soumitra Chatterjee, who any minute now is going to make an appearance as his own special tag in my sidebar. [Update to post (October 9, 2012): and in fact, now he has .] I've drunk the Kool-Aid. One of the ubiquitous and well-documented effects of Kool-Aid, of course, is prowling through the subject's filmography and youtube clips, and I have discovered—and, thanks to my Bengali Cinema Advisory Team members like Bongo Byango , Sayak , and Dotthei , been specifically directed to—many wonderful Soumitra-related things, including his attempt at the twist, which is almost as hilarious as
11 comments
Read more

- September 07, 2012
If you're in the midwestern United States—or have time and money to get yourself here—I highly recommend attending  the Chicago South Asian Film Festival , running September 20–23! To tempt you, the schedule is available here  (with trailers collected here —which is such a good idea) and includes several world and US premieres of films with actors like Shabana Azmi, Lilete Dubey, Deepti Naval, Victor Banerjee, Samrat Chakrabarti, and Parvin Dabas. Due to work commitments I can only make it to the Saturday and Sunday events (and possibly Friday night, if I play my cards right), but you luckier types will get to enjoy Heroine as the gala opening film on the 20th. Frankly I'm not sure how I feel about Heroine:  I love Kareena and the idea of her in such a film is fantastic, and I thought Page 3 was okay, but Fashion is one of the worst films I have ever seen and it violated so many principles of storytelling and basic human decency that trying out something else made by some
5 comments
Read more

- September 02, 2012
In under 100 words! Jalsaghar (The Music Room)  1958 The ominously swaying chandelier in the opening credits gives away the whole movie. Doom, gloom, and hopelessness are played out in lovely acting and musical performances that are encumbered by heavy, unexpectedly clunky symbolism. It's by far my least favorite of the ten Satyajit Ray films I've seen, though I did love the sense of archaeology whenever the camera wandered over the landscape and sets. It's visually very rich, but ultimately it didn't move me. Maybe I'm too much like Ganguly to appreciate this gem of another era—and mindset. A note on the Criterion Collection blu-ray: this movie looked and sounded beautiful, no question about it.  My one complaint is that the subtitles in white lettering were too faintly outlined to be legible when the footage behind them was light. This led to some real problems over scenes of light-colored floors or people in white clothing, which is what everyone in this fi
5 comments
Read more
More posts