Showing posts from June, 2012
Show all

Back when the Bollywood Fugly blog was more active, those of us who contributed to it often got accused of being mean-spririted, watching films just to laugh at their foibles or indulging too often in "so bad it's good." I think those of you reading this know me well enough to understand that was never a deliberate intention, but I can't deny that I sometimes take great pleasure in the, er, inventions of wardrobe departments across the subcontinent. I don't go looking for horrible costumes, but if they have made their way into a released film and I stumble across them, and they in some way delight or amuse or amaze me, then by Helen I am going to enjoy them. They are (or should be) as much a part of the context of what's happening in a film as set design, props, and blocking of the extras.
They have visual impact. They testify to great creativity. They demonstrate the ability of professionals to take an idea, often formed from or in conjunction with other e…
8 comments
Read more

- June 26, 2012
Bluffmaster (2005), Vishal-Shekhar, Trickbaby
Seven years later and I still love every inch of it; it makes me laugh; it makes me cry; it makes me dance. Yeah, I'd call that restorative.

Love Sex aur Dhoka (2010), Sneha Khanwalkar
Kinda hard to believe all of these songs are by the same person, isn't it? And she can sing, too! AND SHE IS A SHE. One of my top soundtracks of all time is by a woman. This album reminds me why I, for one, am going to keep talking about how the relative lack of women in creative positions (among others) in Hindi cinema diminishes the whole industry. I have no idea if Khanwalkar herself is interested in such a fight, but I am.

Raised fist aside, which maybe it will be for good someday, this album is mindblowing—as standalone music, as complementary to what's happening in the film as you see it, as evocative of the film afterwards. As much as I love sassing around my living room to "I Can't Hold It Any Longer" (a lot), I will never fo…
4 comments
Read more 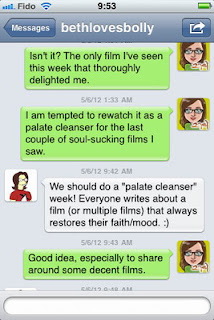 Because sometimes movies are blah or boring or bad, the wise film-watcher has at their disposal a stash of spirit-lifters and faith-restorers. Totally Fimi and I are hosting a week of "palate cleansers," starting today, and we invite one and all to join us in writing about and otherwise sharing movies (and bits thereof) that make us feel better. Follow the conversation on twitter with the hashtag #PalateCleanser. I hope to put up a new post every day.

I'm starting off with a handful of songs because they're the simplest, most discrete unit of fillums I could think of.

"Meri Jane Jana (Oh Baby Don't Break My Heart)" from Mohabbat
So sunny and floral! Such cute smiling faces!  Such dorky, endearing choreography! And if Akshaye Khanna can keep up with Madhuri Dixit as well as this, then surely there is hope for us all.
"Good Morning India" from Khushi
Palate-cleansing is not necessarily the same thing as happy-making, but my personal list sees sig…
3 comments
Read more 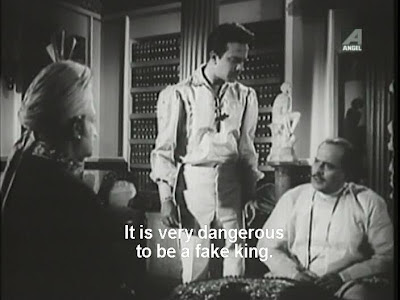 Update to post (July 25, 2013): I must admit that in the year or so since I first saw this film I have become borderline obsessed with it, watching it at least three more times, making gifs, enacting scenes for friends, etc. I think my fascination stems mostly from how this film works as a document in the great (if overblown) "Uttam vs Soumitra" debate that continues to this day in discussions of 60s and 70s Bengali movies. The two appear in several other films together, including at least one more in which Soumitra is the mustache-twirling villain, but of the pairings I've seen this is by far the most interesting, probably because it has Uttam near the peak of his matinee idol goodness and Soumitra young and hungry and chomping at the bit (as opposed to later films like Pratisodh, when he goes completely overboard and Uttam is literally and metaphorically bloated). It's too bad the film doesn't epitomize both of their acting styles; I would argue it is much more…
6 comments
Read more 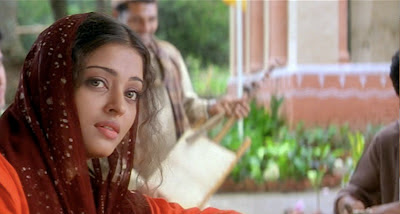 Meet Mansi from Subash Ghai's Taal.  She is caught between a quintessentialrock andhard place for filmi heroines: two men who want to boss her around, exploit her, and calcify her as some sort of embodiment of extreme, outdated, and generally not very useful ideals of Indian-ness. This fate could have been avoided if she'd had a Sassy Gay Friend.
Mansi wears an intricate beaded costume and sits in a director's chair at the edge of an elaborate stage filled with backup dancers.  MANSI  (fiddling with a straw in her Coke bottle and staring wistfully into the distance) Sigh.
SASSY GAY FRIEND
Erupts out of a massive formation of backup dancers practicing their routine. Dodges high kicks and flames bursting from the machinery being wrangled by the special effects crew as he makes his way to Mansi. (pointing in disbelief at the backing dancers' outfits, which just so happen to …
7 comments
Read more 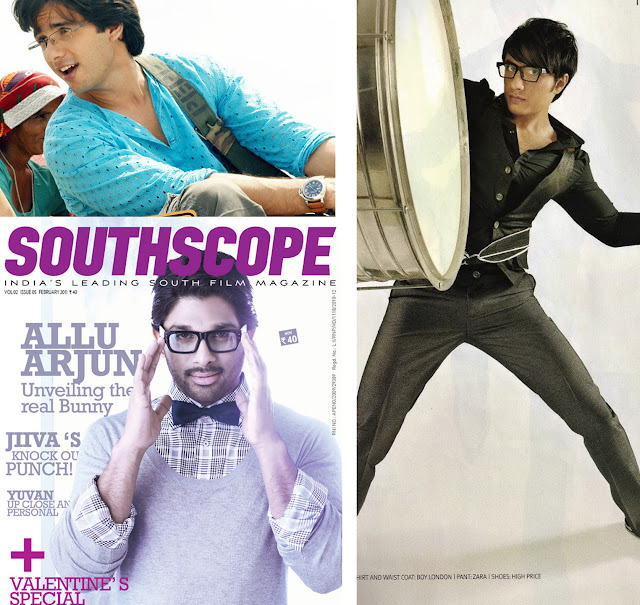 Anyway, I soon discovered that I was not alone in enjoying this combination. …
6 comments
Read more
More posts