Showing posts from January, 2012
Show all

How did Yash Chopra manage to make  Darr  creepy from the very first scene That's the hero talking to the heroine through the letter, though it doubles as exactly what the villain could be saying —and is probably thinking, since he, not the hero, is nearby. but so brain-bashingly stupid? A story that uses fear to contrast definitions and depictions of love would be so much more effective if the romantic pair (Sunil/Sunny Deol and Kiran/Juhi Chawla) did anything to protect themselves from it. They're too stupid to be as afraid as they should be (and therefore cannot act with intelligence), yet somehow they're also too stupid to do much about that fear once it begins to sink in. For example, if you're being stalked, don't open packages that are left at your door anonymously. They've got no street smarts, which I guess is to be expected of a girl who still wears a knee-length plaid skirt and white socks to school, but what's the naval officer'
27 comments
Read more 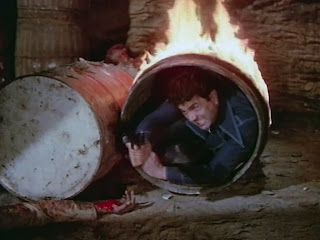 Reader beware: extremely picture-heavy post. Also a note on the title, before we get started: the subtitles translate the word "charas" as opium; a friend in Delhi told me it means heroin; and the Oxford Hindi-English dictionary says it's a kind of resin-based preparation of cannabis. I'll just say "drugs" and be done with it. Charas is fantastic. It's glorious, giddy, jam-packed but streamlined 70s masala. I am simultaneously incredibly grateful to have seen it and saddened by the knowledge that for each movie like this I see there is one fewer remaining to discover. Overall, Charas comes off as an action- and comedy-leaning masala with well-implemented touches of James Bond. Moralizing is all but absent; the movie is loosely about drugs, but here drugs are simply an illegal thing that smugglers export to Europe for cash rather than something evil masterminds are going to use to to enslave the innocent of India and bring the moral downfall of
12 comments
Read more
More posts